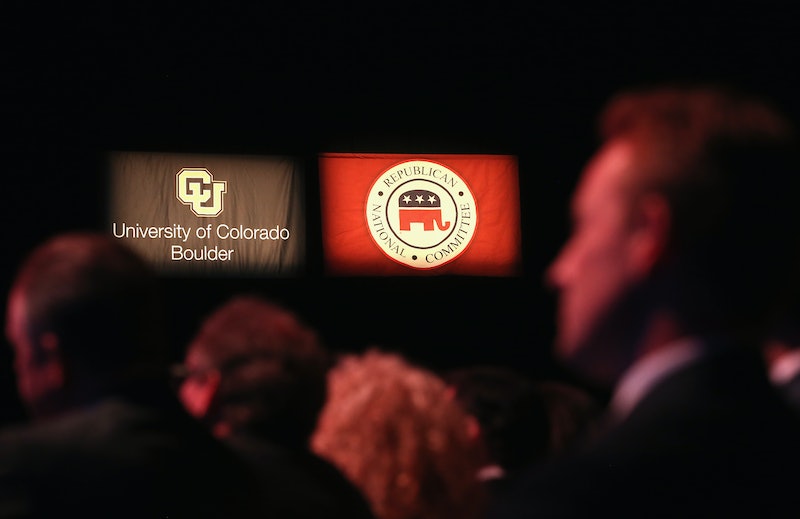 The state GOP leaders of Colorado decided to cancel the vote in protest to the GOP's new rule that mandates delegates from caucus states to vote for the caucus winner at each convention. Caucus goers will still show up to their precincts on Super Tuesday to elect the delegates, but by not directly voting for the presidential candidates, the Colorado party leaders can get around the rule that pledges delegates to a specific candidate.

The change from the national party was enacted partially in response to a risky move Colorado Republicans pulled at their 2012 state nominating convention. Ron Paul and Rick Santorum supporters formed a coalition to fight against the Mitt Romney delegates, and ended up winning a disproportionate number of delegate slots considering Paul's last place finish. The delegates didn't represent the voters and therefore the rules were changed.

However, the delegates still don't represent the people of Colorado under the new system devised by the state party leadership. Coloradans get to vote for the delegates, but then the delegates can do whatever they want at the nominating convention. Colorado Republicans are still having their opinions only partially considered, rather than carrying their full democratic weight throughout the nominating process.

The change in rules won't even necessarily be a good thing for the GOP, as it infringes upon party unity. Ted Cruz won the Iowa caucus this year, and the delegates he won are pledged to vote for him at the national convention in July, even if it doesn't look like there's anyway he can pull off the nomination. Same thing goes for the Nevada caucus — the delegates promised to runner-up Marco Rubio have no choice but to vote for him, further instilling divisiveness in an already divided party.

Ultimately, the lack of a straw poll doesn't make a difference for the candidates. Colorado will have the same number of delegates present at the national convention and those delegates will support whichever candidates they want. However, it seems as though the change in rules hasn't really benefitted anyone, least of all Colorado voters.