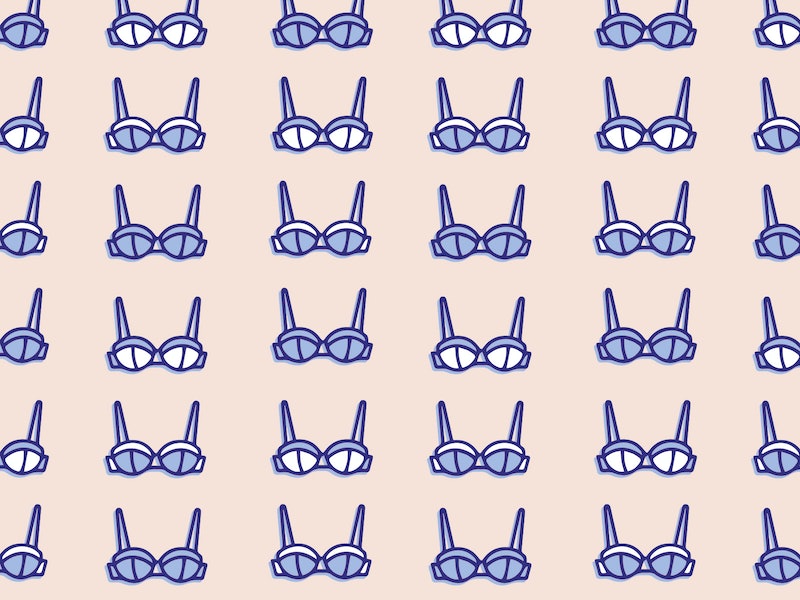 It is generally considered rude to wince, guffaw, or say, "What in the actual fuck is that?" when your partner is taking off their clothes for you, but apparently, no one told my ex-boyfriend that.

"Seriously, what do you even call it?" he asked, tugging at the lingerie... item I had revealed to him — with some difficulty, I might add, as my back was pressed against the steering wheel of my Jetta at the time. (What? We've all been there.) (I mean, we haven't all been in MY Jetta, per se, but you know what I mean.) The garment in question had been purchased from the Victoria's Secret sale rack, and looked like a way less sexy, way less embellished version of this:

It was very clearly an almost-babydoll, not-quite-teddy, vague assimilation of a sexy French maid apron-outfit-thing, so I'm not really sure what he was so confused about. Perhaps it wasn't all that flattering (the above photograph is not, in fact, a selfie of me.) but, still. It was lingerie, dammit! It emphasized my breasts more than, for example, the soccer team sweatshirts I was so fond of wearing back then. What more could an item of lingerie be expected to do, really? Did it take more than an sexy apron to get him excited?

As it turns out, yes. Years of social conditioning and exposure to some truly dubious advertising had led me to believe that any old thing I plucked off the rack at Victoria's Secret (though not PINK, yikes) would cause men to salivate over my lace-clad form. NOT SO.

So I asked the ex, and a fair few fellas after him, what lingerie they did find sexy, and the answers ranged from helpful and unexpected to uninteresting and exasperating. Because men (men are my experience, quite possibly this goes for other genders, too), are, you know, not all the same. That is to say, they're not all the walking, talking boners that Superbowl commercials might lead you to believe.

My informal surveys about what constitutes sexy lingerie turned up answers like: "Something red." "Something black." "Something white." "Something sheer? But also, that gives coverage." "Like, thigh-highs. With the little straps. The dangly straps?" (GARTERS THEY ARE CALLED GARTERS.) As you can see, some dudes are not really sure what turns them on with regards to lingerie, and there's definitely a vocabulary issue.

But, some of my unwitting test subjects had a really established idea of what they wanted in the saucy undergarment department. Like, "That teddy looks good, but fuchsia isn't very sexy. I don't know why. Maybe in blue? Like, a deep blue? That could be hot. And without those bows on the nipples." Because, again, our slampiec— er, romantic partners whom we sometimes are committed to and love, are human beings with varying tastes and opinions.

So, learn from my $35 mistake, and never purchase an overpriced scrap of satin simply because you assume its make and mark alone mean that it holds mysterious, magical desirability powers. No brand, except for possibly Agent Provocateur, holds the secret to sexy sex. (Seriously, though, I think they might have nailed it. Accordingly, their "playsuits" cost about a year's income... If you want to open that Pandora's box, you've gotta pony up, babes.)

As with most clothing, when one purchases lingerie, one should purchase with oneself in mind — mostly. Because while I prefer for my lingerie to be stuff I can wear alone around the apartment, eating chicken wings or whatever (pro tip: babydolls with strategic ruffles hide chicken-wing belly), I also am not gonna lie to you with a line like "Lingerie is all about inner sexy. Lingerie is for you." It just isn't entirely true.

Like sex, wearing lingerie is at least 50% about you, so you feeling good is key; that much is true. But you also can't ignore that you're sharing a bed — or Jetta — with another person. That would be really weird sex, no? So, while you should never blow your money on something you wouldn't want to reuse (Jetta-mates don't always last forever), it also can't hurt for you and your partner to browse your lingerie common ground on Frederick's first. Because it will not be very good for your ego if your fuchsia crotchless panties send them running for the door — trust me on that.