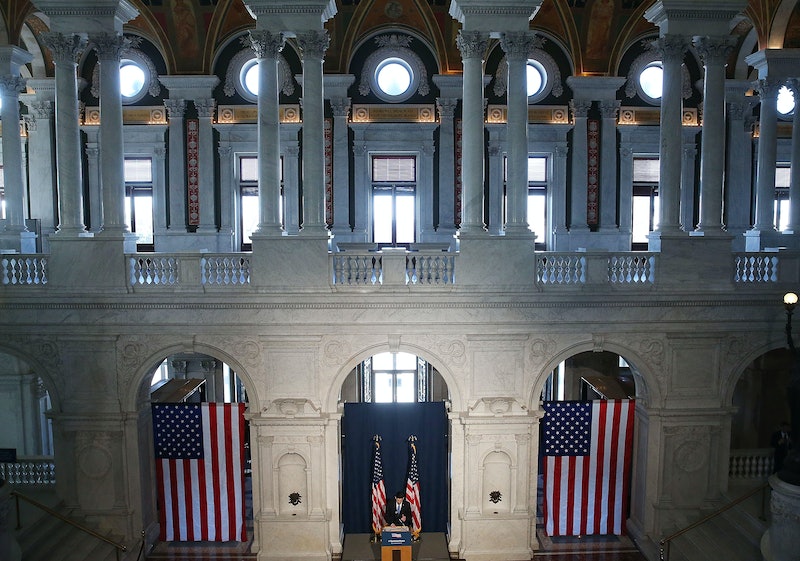 Regardless of whether she's able to make it through an increasingly odious climate for presidential appointees, Carla Hayden is a precedent-shattering nominee for the leadership of the country's largest library. So just who is Dr. Carla Hayden, President Obama's pick to be the next Librarian of Congress? Hayden is the former head of the Enoch Pratt Free Library System in Baltimore, as well as the former director of the Chicago Public Library, and president of the American Library Association from 2003-2004. Hayden was suggested to Obama by the Democratic senators from her current home state of Maryland, Barbara Mikulski and Ben Cardin.

Hayden holds three honorary doctorate degrees from the University of Baltimore, Morgan State University, and McDaniel College, as well as a PhD from the Graduate Library School of the University of Chicago. UChicago is also where she did her M.A. after graduating from Roosevelt University. Librarian of Congress is a lifetime position, and Hayden would be the 14th person to oversee the national library in its 216-year history (and only the third professional librarian). She would also hold the distinction of being the first woman, and the first black American, to hold the position.

Her practical experience at the helm of Baltimore's award-winning Pratt Library, coupled with her academic credentials, makes Hayden a natural choice to head the Library of Congress. The current interim director, David Mao, was appointed to fill the position following the retirement of James Billington in Sept. 15. Billington was a renowned scholar of Russia who was appointed in the waning days of the Reagan administration. Billington stepped down amid criticism that the digitization of the national collection was experiencing too many bureaucratic and technological setbacks, with some documents dating back from the 1980s apparently still languishing in warehouses, unavailable to the public and in deteriorating condition.

In his announcement, Obama praised Hayden's enduring commitment to “modernizing libraries so that everyone can participate in today’s digital culture” and her "understanding of the pivotal role that emerging technologies play in libraries" — casting the 63-year-old professional in sharp contrast to her predecessor. Hayden has also been a longstanding advocate for digital rights. She won the Ms. magazine Woman of the Year Award in 2003 while president of the ALA for rebuking then-Attorney General John Ashcroft's attempt to use provisions of the PATRIOT Act to spy on American's reading and browsing habits.

Hayden is a revolutionary choice to head our nation's most prestigious research library and depository of knowledge. Here's hoping she'll make it through the confirmation hearing, and will subsequently have the resources she needs from Congress to do her job well.