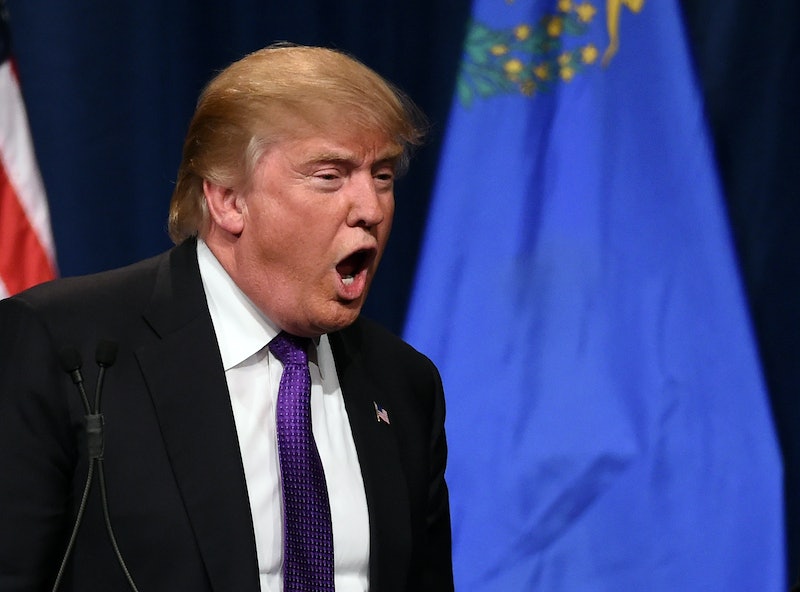 Just after midnight Thursday morning, Twitter took a hilarious turn over the GOP race. The Comedy Central show @midnight with Chris Hardwicke (which, believe it or not, airs at midnight) brought its #hashtagwars into the race among governors, senators, and rich real estate developers to be the leader of the free world, while also commenting on the broader politics of the Grand Old Party. The Republican race and its hateful rhetoric has been pretty depressing lately, but leave it to Twitter to lighten the mood with the funniest #GOPMovies jokes.

On the #hashtagwars segment of the show, famous showbiz folk and comedians compete against each other to come up with the most hilarious tweets for a given hashtag. Past baller hashtags include #RedneckASong and #RuinAChildrensBook. Thursday's topic was #GOPMovies. Panelists Alison Brie, Katy Colloton, and Katie O'Brien shared some gems, such as "Night of the Living Jeb," "Honey, I Carried The Kids To Term," "Let The White One In," and "Koch Brother, Where Art Thou?"

They can't beat the comments from Twitter, though. Viewers are invited to play along at home, tweeting at the show. You can't miss some of this hilarity, teasing the Republicans' views on social issues, hawkish foreign policy, and more. If we're lucky, the #hashtag will power on through the day. Perhaps even The Donald will want to weight in — you know how he loves Twitter! The candidates might be starting to get ugly, but the Twitterverse can keep things fun. #GOPMovies for the win.

It's All About Evil

Not Coming To America

All About A Gay

Plan B If Hillary Doesn't Win

Summing Up The GOP Primary

Have a good one? Tweet it to @midnight with the #GOPMovies hashtag. America will be watching.