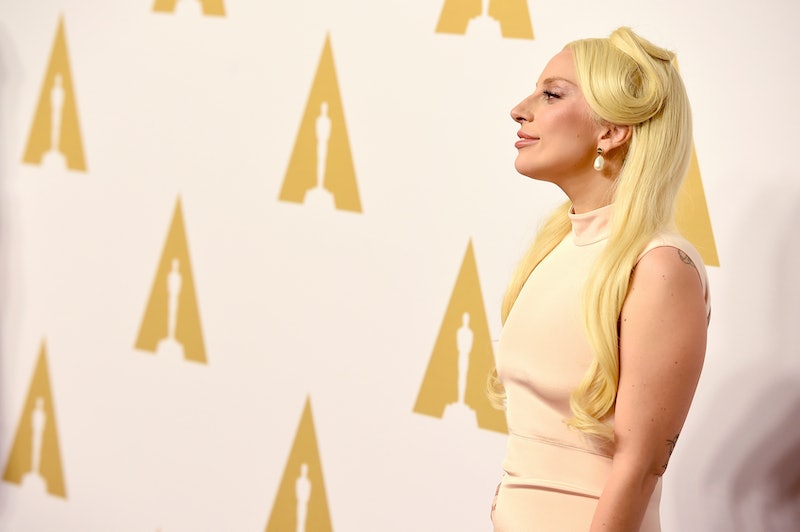 When faced with a "Would you rather?" between live White House events like the President's SOTU address or the annual correspondent's dinner and live awards shows like the Golden Globes or the Oscars, it's no easy task to make a decision. Sure, spotting J-Law on the red carpet would be a highlight of anyone's evening, but listening to Obama crack jokes about shoulder massages from Biden is just as easily a can't-miss moment. This year, though, you'll get to have your Washington and eat your Oscars cake too, because Joe Biden will introduce Lady Gaga at the Oscars to highlight their efforts on one very important common cause.

The event will actually be a melding of movies, music, and politics all in one. One of the films that was shortlisted for an Academy Award nomination (but did not make it to the final list) is The Hunting Ground, a documentary that looks at university students seeking justice after being raped on college campuses. A song featured in the film, "Til It Happens To You," was produced and sung by Lady Gaga and is up for the "Best Original Song" award, which means folks at home will have the privilege of hearing the track performed live during the awards ceremony.

And who better to introduce the musical artist than the guy from the White House who has long campaigned against campus sexual assault?

Biden has been a pretty outspoken advocate for putting an end to domestic and sexual violence since before serving his terms as Obama's right-hand man. Vice President Biden drafted the Violence Against Women Act, signed by former president Clinton in 1994, during his time as a Delaware senator. The act provided funding toward investigation and prosecution of violent crimes against women, required automatic restitution of convicted assaulters, and established an office within the Department of Justice dedicated to mitigating instances of violence against women.

And in joining Lady Gaga on stage Sunday evening, Biden will have the opportunity to promote one White House campaign in particular: the "It's On Us" campaign, which launched last September, encourages Americans to not be bystanders, but rather active citizens by recognizing instances of assault and choosing to intervene.

The audience and viewers at home will then be able to take in Gaga's own speech on the subject, delivered by way of song. And while the issue should be handled at the awards ceremony with wholehearted seriousness (there's no doubt it will be), everyone watching the moment on stage can rejoice in seeing public figures from all spheres come together in the name of ending sexual assault.