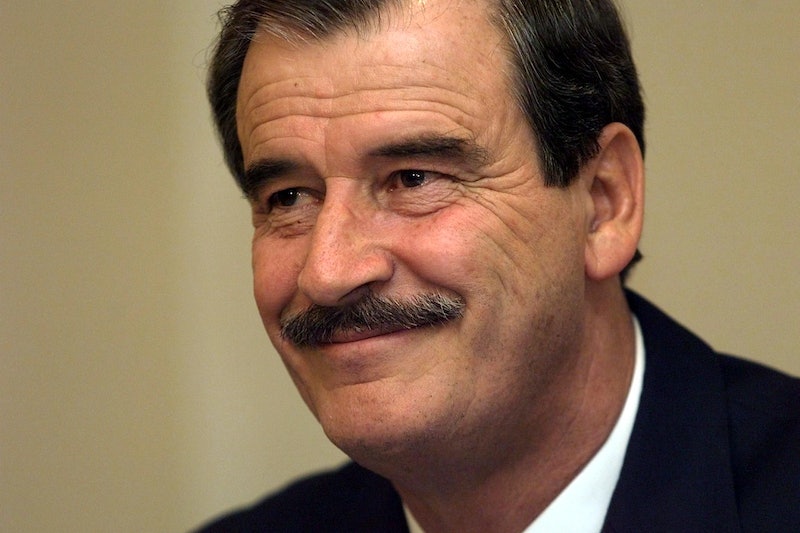 Oh, the wall. GOP presidential candidate Donald Trump's idea to construct a barrier along the border between the U.S. and Mexico was a simple one, but one that has stirred up a complex blend of emotions for American citizens and foreigners alike. The latest individual from outside the States to share his strong feelings on the wall was Vicente Fox, Mexico's leader from 2000 to 2006. The former president of Mexico's response to Donald Trump and his wall proposal is almost too good to be true, and what Trump had to say in return is even better.

In an interview with Fusion's Jorge Ramos, Fox didn't refrain from telling the reporter how he really felt about the wall idea.

I declare: I'm not going to pay for that fucking wall. He should pay for it. He's got the money.

Fox didn't hold back from telling Ramos his thoughts on Trump as a candidate and potential leader, either. The former president of America's neighbor to the south referred to the billionaire as a "crazy" person who "doesn't know what's going on in the world today." Fox also expressed serious concern that Trump had received 44 percent of the Republican Hispanic vote in Tuesday's Nevada caucus, pleading with Hispanic citizens in the U.S. to rethink any commitment to support Trump.

They're followers of a false prophet, and he's going to take them to the desert. And if they think that they will benefit with an administration led by Donald Trump, they're wrong. They must open their eyes.

Fox also had a few words to say on the general American public's current fascination with (or possibly hypnosis by) the Trump Organization's chairman and president.

This nation is going to fail if it goes into the hands of a crazy guy. What is Trump? He's not a Republican. Absolutely not. Those are not the Republican principles. He's not a Democrat. He's just himself. He's egocentric.

Can you go back to angrily rejecting any suggestion of Mexico paying for "that fucking wall," Fox? Because that was fun. In true Trump fashion, the billionaire didn't let but a few hours pass before publishing on social media his sentiments about Fox's statement.

I had no idea Trump was so against anyone with a potty mouth. Or it's possible that Trump long ago made the decision internally to blindly oppose anyone who takes on a potty mouth when talking about the Donald. Unless, of course, it's someone saying how much of a (insert expletive here) winner Trump is.

He probably wouldn't mind that.