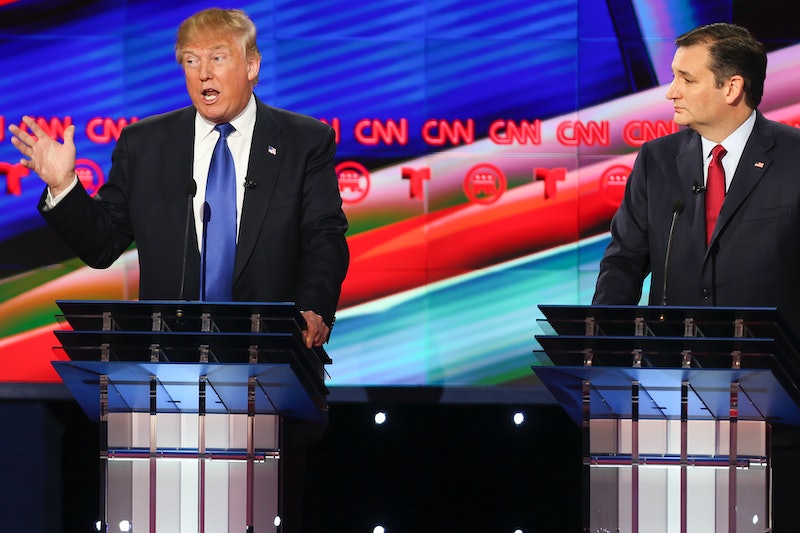 On Thursday night, the GOP presidential candidates had their 10th showdown in Houston, Texas. With only five Republicans still in the race, Donald Trump had less opponents on stage to feud with and more time to talk directly to voters watching from home. To wrap up the night, Trump's GOP debate closing statement bashed politicians.

The debate was Trump's last night to make his case to Americans before 12 states, American Samoa, and American citizens living abroad vote in primaries and caucuses on March 1 (i.e. Super Tuesday). After three consecutive victories in New Hampshire, South Carolina, and Nevada, Trump was clearly feeling pretty confident on stage. How he fares on Super Tuesday will determine whether or not he remains the GOP frontrunner or is overtaken by Ted Cruz or Marco Rubio when more of the country voices its preference. A lot is at stake in the Texas primary especially, as Trump beating Cruz in the senator's home state would make Trump's nomination seem much more inevitable. With his eye on the prize, Trump made a point to attack Cruz throughout the debate at the University of Houston, attempting to prove to Texans in the crowd that he can beat Cruz on any topic.

Nobody knows politicians better than I do. They're all talk. They're no action. Nothing gets done. I've watched them for years. Take a look at what's happening to our country. All of the things that I've been talking about — whether it's trade, whether it's building up our depleted military, whether it's taking care of our vets, whether it's getting rid of Common Core (which is a disaster), or knocking out Obamacare and coming up with something so much better — I will get it done. Politicians will never, ever get it done. And we will make America great again. Thank you.

Trump's using his non-political background to his advantage any chance he gets.