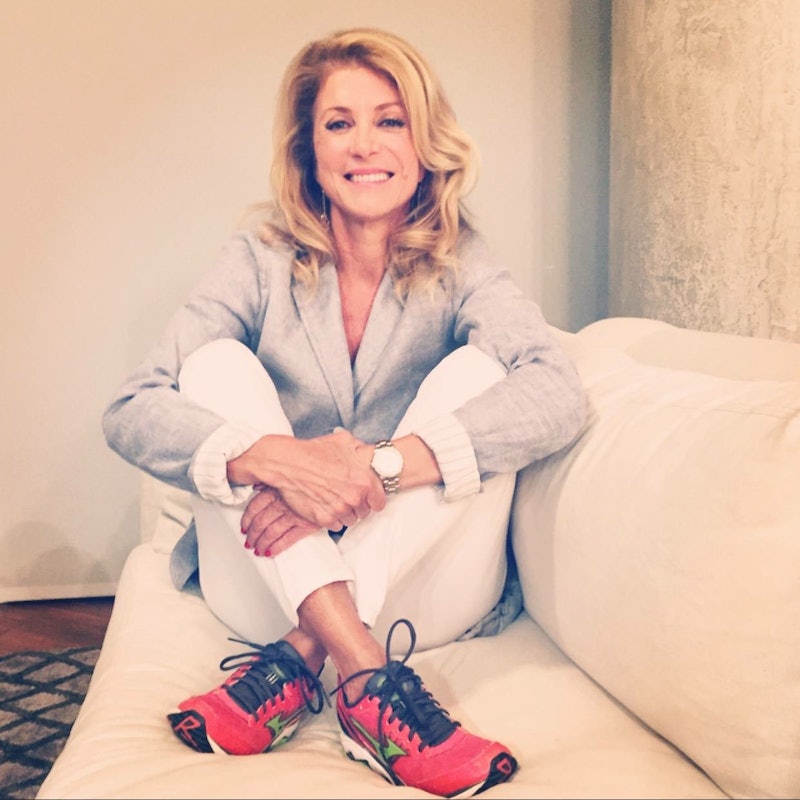 Hillary Clinton's perceived inability to connect with millennial women has been a magnet for political pundits who can't get enough of her struggling (sometimes) to retain a group once considered tailor-made for her. In fact, so much ink has been spilled over the disconnect that there are now larger questions over whether there's a generational divide between feminists, especially after older ones, like Gloria Steinem and Madeleine Albright, tried to convince younger women they should back Clinton. But Wendy Davis believes younger women will vote Clinton — at least the ones in the South.

"When you come to the South to a place like Texas, where there have been very aggressive attempts to unwind women’s reproductive and other freedoms that help them to realize equality, you see a different perspective in our younger women here," Davis tells Bustle. "It isn’t all Team Bernie simply because they’re young."

And Davis may have an edge over Steinem, Albright, and Clinton when it comes to clicking with the younger generation. After she spent roughly 11 hours on the Texas Senate floor filibustering an anti-abortion bill on June 25, 2013, Davis became a household name, especially among the social media-savvy set who cheered her on across the country with tweets of #StandWithWendy. Almost instantly, Davis became an icon of feminist leadership and reproductive rights advocacy for young women throughout the United States.

Davis' reputation as a favorite among female millennials hasn't wavered, even following her unsuccessful run for Texas governor in 2014. It's little wonder that the Clinton campaign has Davis stumping for her as she faces Super Tuesday on March 1 — and, especially, the SEC Primary, the seven Southern states voting that day.

Many see Clinton as already having a clear edge over Sanders in the South. Clinton's win in South Carolina on Saturday was nothing short of sweeping. Still, Sanders has only thrown more wrenches into Clinton's plans to cruise to the nomination since the race has heated up — and polling better than Clinton with young women (in some cases) has been one of the more surprising obstacles. One doesn't need to look further than a couple of weeks back to the New Hampshire primary where exit polls showed 69 percent of women under 45 backed Sanders and a whopping 83 percent under 30 did the same.

But this younger generation of women who aren't not tweeting #ImWithHer as fast as Clinton's campaign would like are not going to be a problem for her in the South, says Davis. The anti-choice legislation — like the bill Davis filibustered but was ultimately passed and signed into law by former Gov. Rick Perry — has created in the South, "a younger demographic of women voters, who are also very supportive of Hillary Clinton, understanding her long-held positions on those issues," she says.

"Looking at states in the South — Texas and other states — what you see has been a very aggressive overreach on behalf of Republicans in the arena of women’s rights, and women are reacting to that," Davis says. "It’s not abstract for us. It’s real."

And, if anything, Davis suggests that if there is a generational divide among female Democrats, it's a Northeastern problem:

If you are in the Northeast, where they have had a very progressive perspective about women’s reproductive freedom and about women’s equal pay and otherwise, you’re not going to have the same sensitivity to those issues from the younger women who live there. It’s not their life experiences. It’s not top of mind for them because they aren’t feeling the same threat.

Verging on throwing just a hint of shade towards the Northeast, Davis emphasizes that younger women in the South have "gained a perspective and an appreciation for the [reproductive rights] battle that that may not be similar depending on where you are in the country," which, in turn, have put them in Clinton's camp.

It's hard to claim that Sanders has offered anything less than robust support for women's rights, especially on reproductive matters. Both he and Clinton have received previous 100 percent approval ratings from NARAL Pro-Choice America.

I ask Davis if she believes Clinton will be stronger on reproductive rights than Sanders. "I absolutely do," she says. "She’s [Clinton] been working on these issues for decades."

Later on in our interview, Davis recounts what she tells younger women when she's campaigning for Clinton. "I try to impress upon them an appreciation and understanding for the fact that that when someone has worn our shoes, they tend to have a better capacity and a stronger commitment to fighting for the things that are important to us."

That may sound a bit like a polite and, admittedly, more nuanced variation of the argument that women should support Clinton because she's a woman. Many younger women haven't taken well to that line of logic or anything that even hints of that line of logic, as shown by the hyper (some might say "overkill") backlash against Albright and Steinem's remarks on millennial female voters.

However, Davis doesn't fault younger women. Instead, she focuses on what the female leaders of her age group should be doing. "It makes me feel disappointed in my generation of women that we haven’t done a better job of helping younger women form an appreciation for the battles that we’ve been through," she says.

During our interview, Davis stresses that she expects there to be less of a riff among the women of the South, but she does admit there is a generational divide — one she witnessed in her younger daughter who, she says, was not an immediate Clinton supporter.

"She has come down on the side of Team Hillary, but it took her a little more time to arrive there," Davis says. "My 27-year-old daughter has been much more in the camp of really thinking about and trying to decide between Bernie Sanders and Hillary Clinton because of her age group, what her friends are talking about, how they’re viewing things."

Meanwhile, Davis says "it wasn’t even a hesitation" for her 33-year-old daughter, and she thinks those six years made a difference. "I think she’s just old enough at 33, she’s had a bit more life experience witnessing the body of work of Hillary Clinton," Davis says.

Ultimately, though, the Davis women have all decided on Clinton.

"For both of my daughters, having the mother they have, they can’t escape an acute understanding of women’s equality and which of the candidate they feel will be the best one to be a fighter on those issues."

And for Davis, there's no question that the fighter is Clinton.