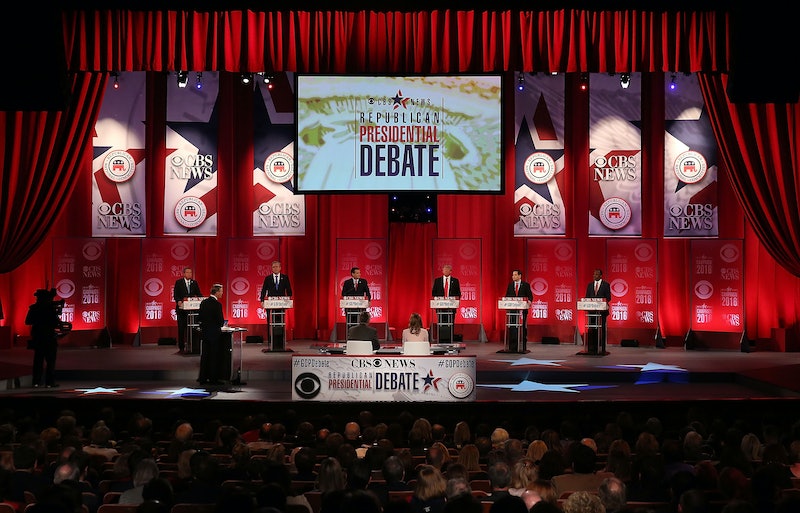 Can you believe we've made it to the 10th GOP debate of this election season? This isn't including the many undercard debates that occurred up until recently, providing launching points for candidates like Carly Fiorina, who gained enough momentum to ascend to the main debate only to lose steam. Everyone's favorite curious candidate Jim Gilmore got his lone debate time in an undercard debate. With far less candidates, you'd think there'd be less fanfare behind the event. Not if the internet has anything to do with it. Funny GOP debate memes and jokes were all over social media on Thursday night.

The debate was the least crowded it's been since the election started. Just five candidates took the stage at the University of Houston, including Donald Trump, Ben Carson, Marco Rubio, Ted Cruz, and John Kasich. One person who was sadly missing but whose parents made the trip nonetheless was Jeb Bush. The former Florida governor and son of the 41st president ended his campaign following a disastrous GOP South Carolina primary for the candidate. Having the elder Bushes in attendance only added fuel to the memes and jokes fire. Twitter was more than ready for Barbara Bush or George H.W. Bush to take a more hands on approach at the GOP debate and apparently so was RNC Chairman Reince Preibus. He allegedly asked if George wanted his old job back.

The GOP debate has been a rather breathtaking affair when it comes to the sheer amount of unexpected twists and meme-worthy moments. Rubio has repeatedly attacked Trump, to the point that moderator Wolf Blitzer has been repeatedly talked over. The few times that Carson has answered questions have yielded more puzzling soundbites than minutes in the debate it seems. A particularly strange line about "the fruit salad of life" concluded the retired neurosurgeon's statement about picking a Supreme Court justice nominee. Even Trump, the frontrunner candidate, has seen some weird verbal missteps, including the use of the nonexistent word "bigly."

In a pivotal moment where candidates are seeking to earn more votes as they head into Super Tuesday, it appears as if the 10th GOP debate has been nothing more than a verbal bloodbath of interfighting between candidates rather than an address to Republican voters. The gloves have come off and unprofessionalism has emerged. Such behavior certainly isn't enough to help sway an undecided voter eager for information but it does keep the jokes going on a night that has offered few commercial breaks but plenty of things to laugh at.