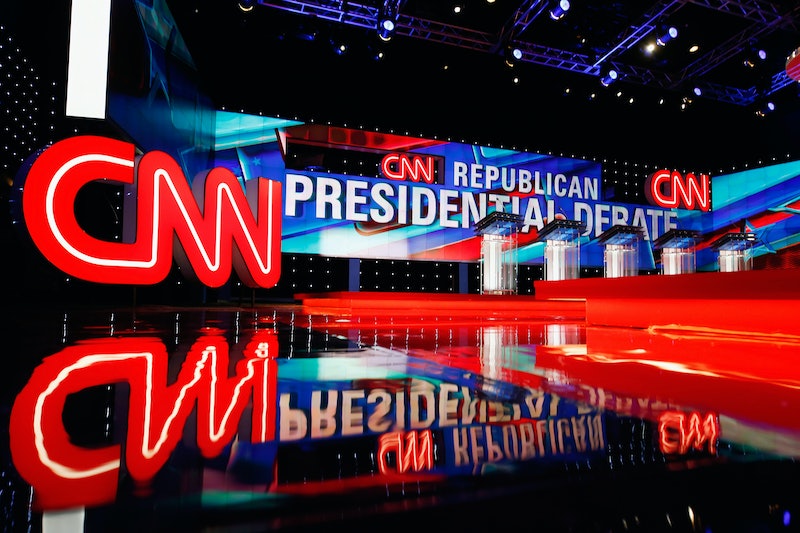 The 10th (!) Republican debate is over, and amazingly, it was even rowdier than the last. With only five candidates on the stage, things got very personal very quickly, and we saw a feistier, more aggressive Marco Rubio than ever before. And yet, when all was said and done, the winner of the Republican debate was, as always, Mr. Donald J. Trump.

The reason for this is simple. Trump was the overwhelming favorite to win the nomination before the debate started. Had one of the anti-Trump opponents had broken out on Thursday and really shone, they might have succeeded in disrupting the Trumpmentum. But that didn't happen. Instead, Trump dragged everyone into dirt with him, and they allowed him to. As a result, none of the anti-Trumps emerged as forces in their own right, and Trump retained his lock on the nomination.

To be sure, Trump didn't emerge entirely unscathed. Rubio landed a couple punches on him, by which I mean he successfully talked over the Donald a few times. Given how good the Trump is at steamrolling his debate opponents, that's an accomplishment in its own right. Rubio also successfully highlighted the fact that Trump's health care plan is somewhat lacking (although then again, so is Rubio's).

In totality, though, Trump won Thursday's debate, and he did this by denying his opponents the opportunity to distinguish themselves as plausible Trump alternatives. To see how this played out, look no further than the following exchange. This, in a minute and a half, perfectly encapsulated how and why Trump won the debate.

This is worth analyzing in depth, because a whole lot happened there.

First, Cruz attacked Trump for donating to "liberal democrats," but Trump neutered that criticism by pointing out that Cruz himself accepted Trump donations during his 2012 Senate race. Rubio — attempting to draw a distinction between him and Cruz — piped in and said that Trump never donated to his Senate campaign. Trump, however, retorted by saying that Rubio sent him an autographed book claiming he was doing a "great job."

This accomplished two things. First, it distracted Cruz from responding to the allegation that he'd taken donations from Trump. More importantly, though, Trump's comment successfully depicted both Rubio and Cruz as being fans of Trump. If you're Trump, you want Rubio and Cruz to stay roughly even with one another, so they both continue splitting the anti-Trump vote. Lumping them together is a great way to do this, and that's what he accomplished with that response.

At that point, everything went to hell. All of the candidates, and moderator Wolf Blitzer, started talking over one another. Blitzer said it was time to move on, Cruz complained about how much Trump had interrupted him, Trump agreed that the debate should move on, Carson complained about not getting enough speaking time, and eventually, you couldn't even hear what was being said.

In other words, it devolved into utter chaos — and that's exactly what Trump wanted.

To borrow an old saying, picking a fight with Donald Trump is like wrestling with a pig: Everyone gets dirty, and the pig loves it. That's what happened here. By dragging Rubio and Cruz down into the mud with him, Trump made both of them look extremely petty and whiny, which makes it that much harder for them to emerge as plausible Trump alternatives. At the same time, Trump himself didn't come out looking so bad, because his personal brand is already built around being petty and whiney.

Trump did this the whole debate, and the cumulative effect was that he prevented anybody else from breaking out, thus preserving his status as the frontrunner.

So, let’s get a bit of perspective here. Four states have voted in the GOP primary. Trump outright won three of them — New Hampshire, South Carolina and Nevada — and came in second place in the other, Iowa. This means he’s demonstrated his appeal amongst Republicans in wildly different demographics. He also has more delegates than all of the other candidates combined, and leads in almost all of the remaining primary states.

With Rubio, Cruz, and Kasich (who was a non-entity in this debate) continuing to split the non-Trump vote, there are two conceivable ways to stop the Donald. One is for all but one of the non-Trumps to drop out. Because Trump loses in head-to-head matchups to Cruz and Rubio, a smaller field would — in theory — spell doom for Trump. However, there are no indications that Cruz or Rubio want to give up this fight just yet.

The second option would be to confront Trump directly in hopes of lowering his support. That's what Cruz and company tried to do tonight, but it didn't work. Trump — who has turned out to be a far craftier politician than anybody expected — successfully goaded the others into debating on his term. When you're debating Trump on his own terms, you're always going to lose, and that has been the central reason why none of the Republicans have been able to topple him.

Going into the debate, it was exceedingly unlikely that anyone other than Trump could win the Republican presidential nomination. That’s still the case now.