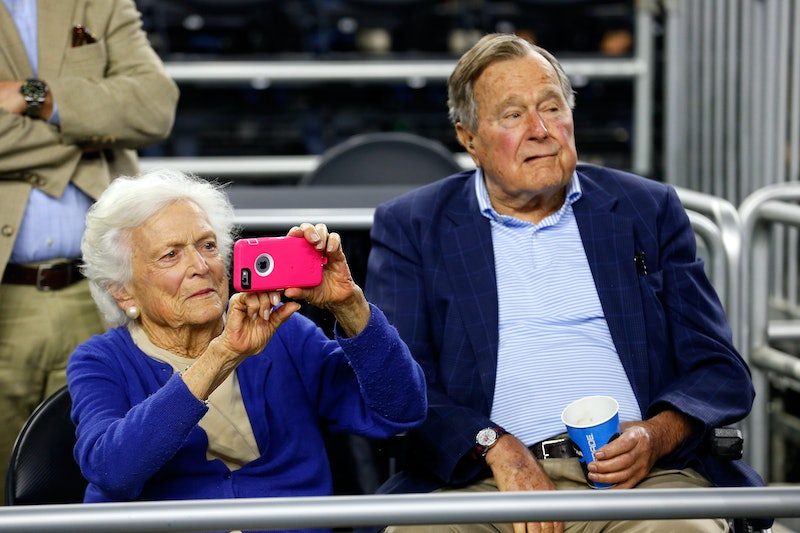 On Thursday night, moments before the GOP candidates faced off yet again, a towering figure of their party got his due: former President George H.W. Bush got a standing ovation at the Republican debate. It was a clearly emotional moment for the Bushes ― George and his wife Barbara, who occupied the White House from 1989 through 1993 ― as the assembled crowd in the former president's hometown of Houston, Texas, rose to their feet in appreciation.

It was clear from the start of the debate that the candidates noted the warm reception the elder Bush received, with Florida senator (and fierce friend-turned-rival-turned-friend of Bush's son Jeb) Marco Rubio name-dropping him alongside Ronald Reagan in his opening statement.

It wasn't the only ovation Bush received throughout the night, either. According to reports, he was also met with a thunderous response following his entrance to the hall. It probably rung to the room as a slightly melancholy moment, given that Jeb was forced to drop out before making it to Super Tuesday, but it was clearly a joyful moment for the partisan crowd as well.

Bush, 91, has faced reports of flagging health over the past couple of years, although he's set an incredibly robust example throughout his later years ― he famously celebrated his 90th birthday by skydiving. This might sound extreme for some people, but as a staunchly decorated World War II veteran and combat pilot, it's fair to say that he's no stranger to far greater adrenaline rushes than that.

He's also a very well-regarded figure within the Republican Party, assuming a place of fondness and authority within the party's establishment that's quite a feat for a one-term president. The closest comparison for the Democrats is undoubtedly former president Jimmy Carter, who remains a vociferous and impassioned voice for his politics and his humanitarian advocacy.

All in all, it was probably a heartwarming moment for the Bushes, even if Jeb's absence probably made it sting a bit. Say what you will about the family political dynasty and its legacy, but there's at the very least something worthwhile, humanizing, and impressive in seeing this kind of moment. And rest assured, the party feels the same way ― if the GOP establishment could somehow clone Bush and slip him into the general election this coming year, they do it in a second.