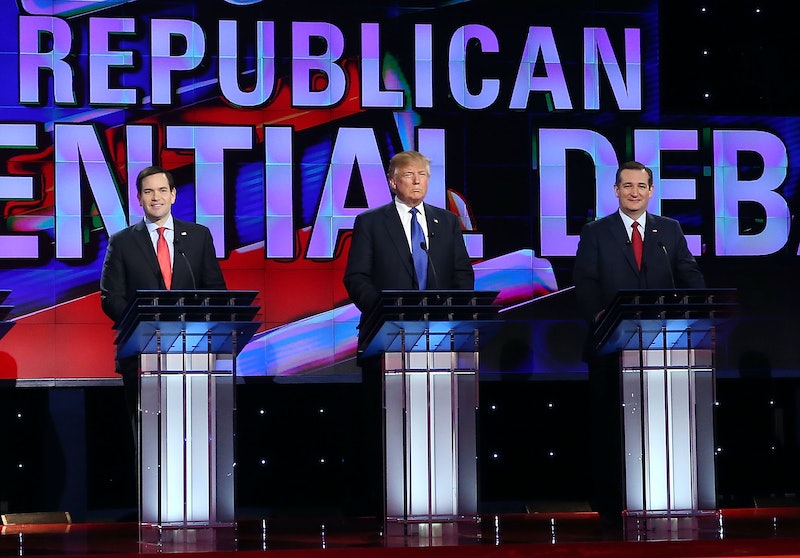 On Thursday night, during the 10th Republican presidential debate in Houston, Texas, the GOP got the confrontation they were waiting for: Marco Rubio finally went after Donald Trump, and things got very combative very quickly. As if making a direct statement about what's perhaps the core criticism of his candidacy ― that he's too scripted, too repetitive, too downright robotic ― Rubio voluntarily entered into a situation that Trump's Republican rivals have often been loath to risk. Namely, he went toe-to-toe with Trump in a hostile, extemporaneous argument.

The two got into testy back-and-forths on a number of subjects, including immigration, Rubio's troubled financial history (at least by the standards of most presidential candidates), and Trump's business dealings and employment of undocumented immigrant workers.

In particular, Rubio threw down one line that drew a very raucous response from the crowd ― he said that if Trump "builds the wall the way he built Trump Tower he'll be using illegal immigrant labor to do it." Trump denied this vociferously, although the allegation has been swirling in the news lately by way of an ongoing lawsuit.

Rubio quickly learned why so many of his fellow candidates were so shy about taking up this challenge, however. If there's a single guiding principle of the Trump political brand, it's that when somebody crosses you, you attack like hell. And Trump didn't hold back: he tore into Rubio on a very touchy personal subject, accusing him of having "problems" with his credit cards.

This probably goes without saying, but Thursday night was by far the most aggressive that Rubio and Cruz have gotten with Trump since the primary race began, although whether it bears any fruit remains to be seen. After the conclusion of the debate, the commentary from CNN's panel was all about Rubio's assertive night, how he took the fight to Trump, and how Trump was visibly bristled by it.

But everyone should also remember just how strikingly Trump's campaign has defied the conventional wisdom at every turn ― pundits and predictors keep insisting he's going to drop in the polls, and it just never happens. Simply put, with the kinds of leads he's got rolling into Super Tuesday, it could end up being too little, too late.