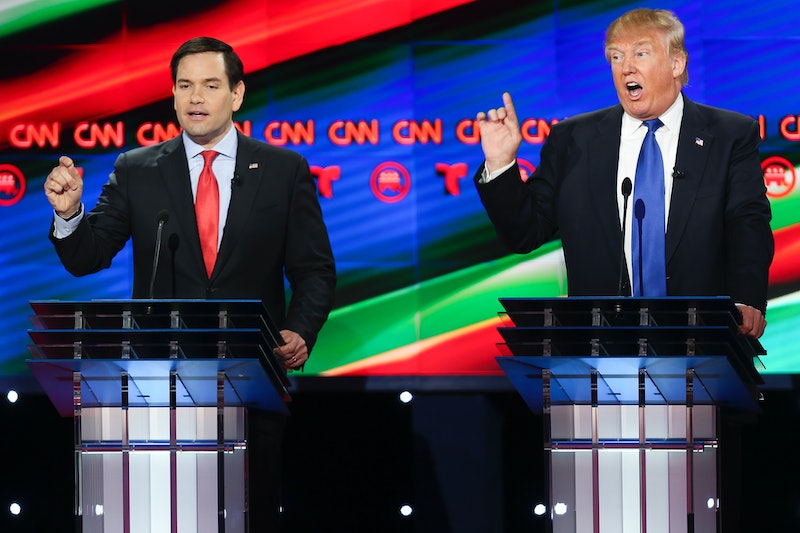 In the 10th GOP debate in Texas Thursday night, Marco Rubio brought back the robot attack on Donald Trump, who repeated familiar talking points multiple times on stage. After Chris Christie criticized Rubio in a debate earlier this month for citing back memorized speeches instead of properly debating, Rubio used the same language to insult his biggest opponent. To demonstrate how the real estate magnate is the real Republican robot — not him — Rubio did an on-stage impression of the comments Trump has had on repeat since starting his campaign.

While discussing health care, Rubio tried to get Trump to explain the details of his plan, beyond getting rid of the lines around states. Turning the tables on Trump and laughing as he bristled under his attack, Rubio said Thursday night: "Now, HE's repeating himself! I watched him repeat himself five times two weeks ago. And I watched him repeat himself five times five seconds ago." In a pretty spot-on impression of the GOP frontrunner's main talking points, Rubio said: "He's gonna make America great again. We're gonna win, win, win. He's winning in the polls. And the lines around the state." Trump is usually a good debater — he's enthusiastic, quick on his toes, and isn't afraid to attack his rivals. However, Rubio's impression of Robot Trump got a big applause from the crowd in Houston.

As Rubio spoke and the crowd cheered, Trump held up his finger repeating, "No, no, no." Once the clapping died down, he said, "I don't repeat myself. Here's the guy who repeats himself," pointing to Rubio.

During the Feb. 6 GOP debate, when Christie was still in the race, the New Jersey governor yelled at Rubio: "There it is, the memorized 25-second speech. There it is, everybody." The argument largely contributed to Rubio walking away with a horrible debate performance, as it played into the notion that the Florida senator is an establishment politician who can't think for himself. One of Trump's biggest advantages over Rubio is that he's not a politician, and thus appeals to voters who want to put a political outsider in the White House.

Rubio brought his A game Thursday though, trying to show voters that Trump can't move beyond his repeated talking points.