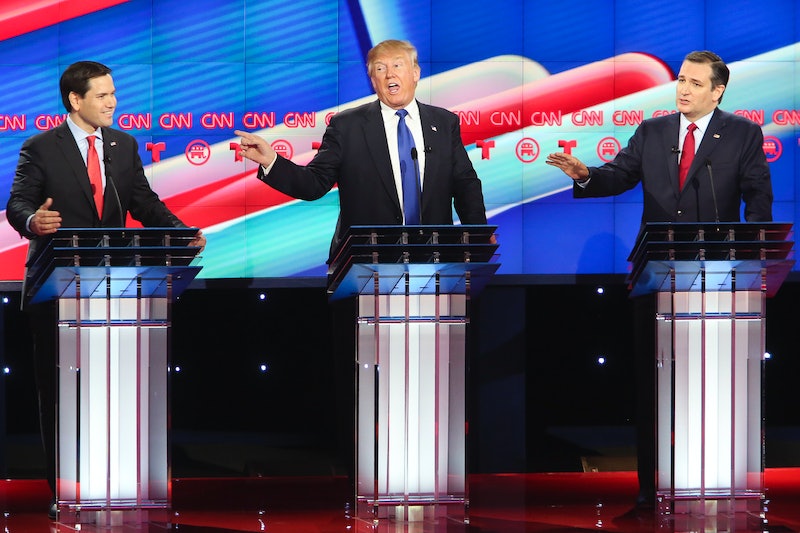 Like many of the previous 2016 GOP debates, Thursday night's showdown in Houston, Texas involved a lot of yelling and bickering. The top three contenders — Donald Trump, Ted Cruz, and Marco Rubio — were at each other's throats the whole time, each desperately trying to show voters how his rivals were incompetent liars rather than explaining his own policy plans in detail. Because of all the on-stage fighting, the one photo that perfectly sums up the GOP debate is so sad it's almost funny (OK, it's a little funny).

While the three presidential hopefuls bickered and attempted to talk over one another in a moment of pure chaos, CNN's closed captioning simply read: "Unintelligible yelling." The employee in charge of captions was clearly fed up with not being able to decipher what was being said, as was America. Those two words captured the essence of the whole debate — yelling, yelling, yelling as the loudest candidate would put it. No matter who's moderating, the GOP debates have become uncontrollable performances that mostly just amount to a lot of noise. After hours of watching the remaining five Republican candidates answer questions from moderators and address one another, it was alarmingly difficult to remember any substantive discussion that took place.

Rubio came out swinging Thursday night, attacking Trump more than ever before. While political analysts have been saying for weeks that Rubio and Cruz need to get tougher on Trump if they want to stop his building momentum, it wasn't effective when they all tried to talk at once and no one's voice could be heard. After all, what's the point of a presidential debate if voters can't even decipher what the candidates are saying? It seems like a good rule of thumb would be: if the closed captioner can't type up what's being said, viewers can't hear it either. At least yell one at a time so it's intelligible.