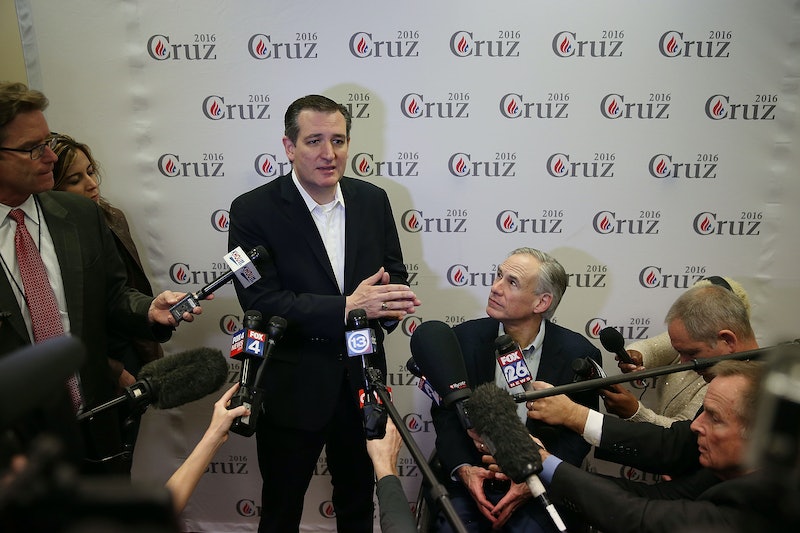 The biggest voting day of the 2016 primary is rapidly approaching: Super Tuesday. More than 10 states and territories will cast their votes in the Democratic and Republican primaries on March 1, and that means a whole lot of delegates are at play. One Super Tuesday state, however, is arguably more important than the rest, and that's the Lone Star State. Why is the Texas primary so important?

One word: Delegates. In both parties, Texas is worth more delegates than almost any other state in the country. What's more, the Lone Star State's delegate allocation rules mean that it's possible to win every delegate in the state without receiving 100% of the vote. These two factors combined make it a prize worth competing for on Super Tuesday.

This is especially true on the Republican side, which uses a hybrid delegate system in Texas that's informally known as "winner-take-most." This means that if no candidate reaches 50 percent of the vote, the delegates are awarded proportionally based on each candidate's vote share. However, if anyone gets over 50 percent, they win all of the delegates* at play. Because the state is worth so many delegates — 2,472 in the GOP primary — that makes it a potential jackpot for anyone who can clear the 50 percent threshold.

In addition, the specific contours of the 2016 race give Texas even more importance. As of now, it's the absolute best chance for the Republican Party to take down Donald Trump, because it's one of just two Super Tuesday states in which Trump is trailing another candidate (Cruz has a modest 4-point lead over Trump in Arkansas, but only two polls have been conducted there). In Texas, Cruz is leading Trump by about 8 points, and so, in the unlikely scenario wherein Cruz clears 50 percent of the vote in the state, it would put a serious dent in Trump's delegate lead. At this point, it might be the last chance of any candidate pulling off that task.

For Republicans, though, Texas is a YUGE contest. If Cruz (or, less likely, Rubio) manages to best Trump there, the entire race could be thrown into upheaval yet again. If they don't, Trump should start penning his acceptance speech for the convention this summer — if he hasn't already done so.

*It's actually a bit more complicated than this. About one-third of Texas' delegates are awarded based on the statewide results, while the other two-thirds are distributed on a district-wide basis. So, if you win the majority of the statewide vote, you'll automatically win one-third of the state's delegates. Additionally, getting over 50 percent of the vote in any given congressional district gets you every one of that district's delegates. To get every single delegate in the state, then, a candidate would have to do two things: Win a majority of the statewide vote and win over 50 percent in every congressional district in the state. There are even more nuances than this — see here if you want to get into the nitty-gritty.