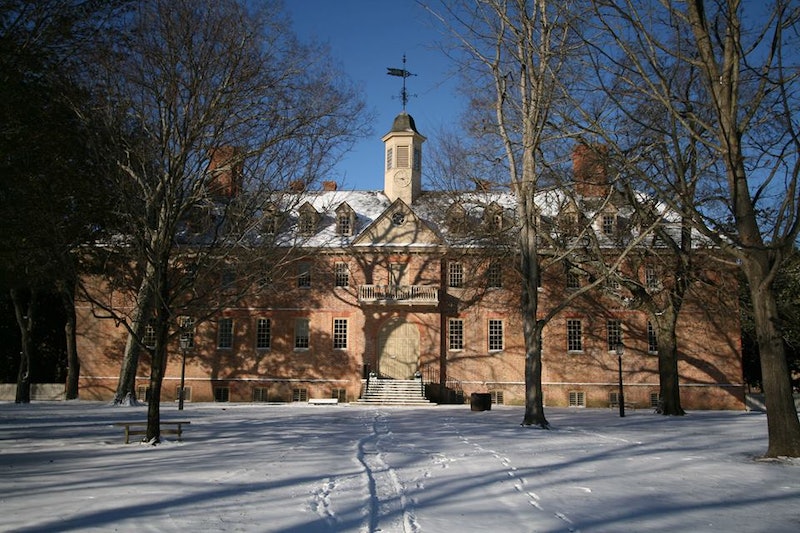 What do you think of when you think of community outreach? Spending an afternoon beautifying a local park? Tutoring inner-city kids? Something like that? Whatever comes to mind for you, I bet it has nothing to do with “saving the sluts.” Unfortunately, though, that’s what a leaked email from a Sigma Chi member to his fraternity brothers suggests for its next “community outreach program”: A “Save the Sluts” campaign.

I think the Daily Dot put it best when they said that the email, which was sent over the Zeta Upsilon listserv at the College of William and Mary, encapsulates everything that’s wrong with bro culture. The letter encourages the writer's fraternity brothers to ignore “the 99 percent of horrendously illogical bullshit that makes up the modern woman” and focus only on “the one percent, the snatch.” “Sluts are everywhere,” it reads, instructing the brothers that it’s A-OK to imagine what kind of underwear any passing woman might be wearing or even “entertain the idea she may not be wearing any at all.” “Stare as long as you please,” it continues. “They don’t mind.”

I’m not sure which is worse: The fact that I thought prolonged exposure to this sort of hideousness had inoculated me against it, or the fact that I felt like I’d been slapped in the face after I read it.

To be fair, Sigma Chi seems to be dealing with it appropriately; the chapter’s consul released the following official statement after the Huffington Post reached out to them for comment:

“We deeply regret the message that was sent through our listserv encouraging actions that are inconsistent with our values as Sigma Chis. The message was disrespectful toward women, and that is not who we are as a chapter. We have moved to suspend the individual who was responsible for the message and International Fraternity leaders are taking action to ensure proper disciplinary measures are taken. Rest assured that we are also voluntarily taking an internal review of our membership, to be sure that our chapter is comprised only of men of the highest character. Until then, we have voluntarily and proactively ceased normal chapter operations.”

And this also isn’t to say that Greek life is all bad. I’ve never been a fan of it myself, but for every Greek life horror story that surfaces, I know there are plenty of men and women for whom time with a fraternity or sorority was nothing but a positive experience. But every time something like this comes out, I’m always left wondering, how have we managed to build a world where this is the norm? Something is deeply, deeply wrong. I just hope that it's not so far gone as to be unfixable.

You can read the full email below, but be warned — it contains NSFW language, and it might make you want to punch something:

Guys, I just want to put out an early semester reminder that life is good. You’re here, you’re alive, your penis may not always work, but it hasn’t fallen off yet; be thankful. I ask you all to take a few seconds off from complaining about the cold, or preparing your schedule for Spring 2016, and look around you. There’s beer to be drunk, porn to view, and sluts to fuck. Let me reiterate that last point: sluts are everywhere. While walking from class to class with your head down limiting exposure to the arctic winds of late, take notice of the feet shuffling by. See some riding boots? Some uggs? A hideous pair of rain boots without a cloud in sight? Now, raise your gaze from the footwear up, allow your eyes to wander from the feet up the long and slender legs of the lesser sex until finally you arrive at God’s greatest gift: the box.

Now stop. Take it all in, breath deep, imagine what kind of underwear she’s wearing, even entertain the idea she may not be wearing any at all, but stare as long as you please, they don’t mind.

Now refocus. That vagina needs you. Never mind the extremities that surround it, the 99% of horrendously illogical bullshit that makes up the modern woman, consider only the 1%, the snatch. Empires have risen and fallen at the hands of the female genitalia. It has made many men, and crushed countless more. Don’t allow yourself to fall victim, don’t be another statistic. Master your craft, hone your skills, and perfect your stroke. Put two moist sponges in a solo cup and fuck that until you get it right if you have to, but do not settle until you’ve done just that: gotten it right. I can’t do this alone boys. I’m losing sleep at night thinking of all the pussies crying out for a good fuck and not getting it, so I’m reaching out to you all in a time of need to initiate my community outreach program: Save the Sluts. Don’t let this beautiful opportunity go to waste.

Seize the moment, stuff the box, and put the neglected pussies that haunt my dreams to rest.

Thank you all, and good luck.

Image: The College of William and Mary/Facebook

More like this
Black Women's Equal Pay Day Highlights An Upsetting Problem
By Brandi Neal
This Psychological Effect Might Be Keeping You From Hitting Your Goals
By Lexi Inks
Help! I'm Not Getting Any Attention On Dating Apps. What Can I Do?
By Sophia Benoit
The 12 Best Strapless Bras That Won’t Slip & Fall Down
By Audrey Williams and BDG Commerce
Get Even More From Bustle — Sign Up For The Newsletter