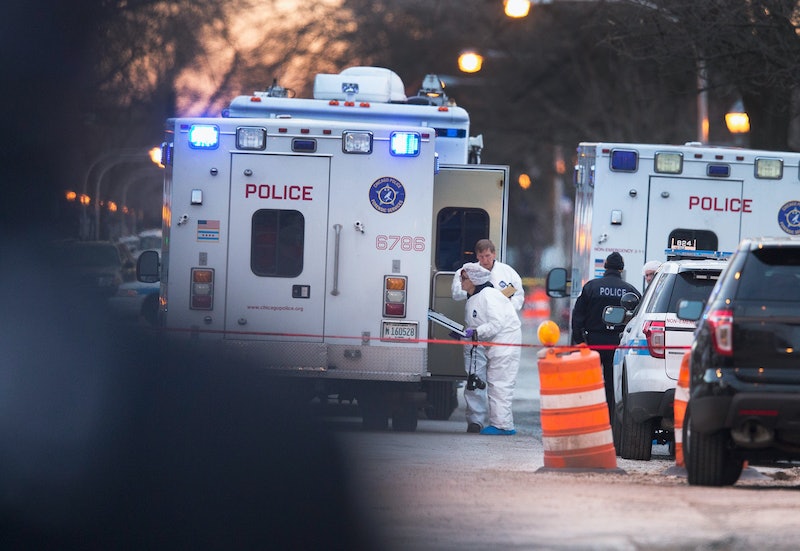 Thursday's shooting at Excel Industries in Hesston, Kansas was one of countless mass shootings this year across the U.S. An Excel employee opened fire on his unsuspecting colleagues on the evening of Thursday, Feb. 25, killing three others and injuring 18 people in total. The shooter, identified by other employees as Cedric Ford, began shooting in the parking lot, then moved to the lobby of the building before he attacked those inside the lawn care machine production plant. The details are troubling and what the Excel Industries employees have said about the shooting reveals a first-hand look into the horrific experience that transpired at the plant.

From what we know about the shooting, Ford injured all 18 people in 26 minutes, which is a disturbing reality to confront as an outsider, let alone as one of the 150 employees at the plant during the attack. In less than 24 hours, employees of Excel Industries began speaking with press and other coworkers to try to recount what happened between the time Ford arrived to the plant and when police responded to the 911 calls.

From engaging in "normal conversations" with Ford to reliving the moment a bullet entered their body, what these Excel employees are saying about the shooting is important for all to know.

Matt Jarrell, a paint-line worker at Excel Industries, said he arrived to the parking lot at the same time as Ford — around 2:05 p.m. Ford seemed normal that afternoon, Jarrell told Kansas.com, as he threw a peace sign to Jarrell and asked him, "How you doing bro? How you feeling?" Jarrell said he and Ford made small talk and discussed a problem with Ford's new truck, which Jarrell had agreed to help with after their shift. In his interview with Kansas.com, Jarrell detailed how Ford began attacking the plant during break time, when he saw Ford fire three shots outside before entering the plant.

I’m in shock. I mean, we had a normal conversation. I was gonna help the man out this afternoon. He was strapped up with an assault rifle. I saw casings fly out of the gun. It was like something out of the movies. One of the gentlemen that got shot, he was the one that took me out of that spot [on the paint line] minutes before. I left to break at 4:55 and it was probably 4:57 when he went in the parking lot and started shooting.

Another Excel employee, Alicia Sloan, spoke with Kansas.com about her experience working at the plant during Ford's attack. Within a matter of seconds, Sloan said she heard 20 gunshots go off as Ford made his way through a tunnel and into Plant 4 where Sloan was working. Employees began yelling "fire" and "explosion" as they tried to warn other of what was happening. Sloan immediately ran for a door to exit the plant and when she made it outside she saw a fellow coworker who "looked completely scared" sprinting across nearby railroad tracks. As she ran over a hill, Sloan saw another colleague limping after being shot in the leg and she witnessed Ford shoot her supervisor.

He was limping up the hill to get over the railroad tracks, and you could tell he was shot in the leg. He got shot in the back twice while I was looking at him. The gunshots were coming and I was over that hill, so I could lay down and not get hit. I saw a friend I went to school with, and he was shot in the leg, and he was losing so much blood. People were helping him onto the steps so he could sit down, and someone took a belt and tied it around (his leg) to get the pressure.

Jesus Fierros spoke with the New York Times from his hospital bed. Fierros, 25, was shot in the leg while working at Excel during the shooting. Although he tried to run from the plant when Ford opened fired, he didn't make it out in time before he felt an unbearable pain in his right leg. Because Fierros was running for his life, he said he never actually saw the shooter.

I just heard the gunshots and I just took off running. I heard people saying someone was shooting, and then I got shot in the leg and everyone started helping me. At that moment I wasn’t thinking. I was just running, getting as far away as possible.

Marty Pierce was at the Excel plant when Ford began his attack. While working near the paint department, Pierce heard a series of gunshots as Ford aimlessly opened fire in an assembly just outside the paint line, according to the New York Times. As Ford "started spraying everyone with bullets," employees were confused by what was happening.

I thought it was a fire or an explosion — I didn’t know someone was shooting, but then our robot operator decided to go look down the hallway and he got shot.

A Couple Was Separated During The Attacks

Russell Hill and Amanda Gomez are both employees at Excel Industries, but they are also boyfriend and girlfriend. While working at Excel during the shooting, the two were separated throughout the nearly 30-minute attack that Ford carried out throughout the plant. In an interview with The Washington Post, Hill recounted the experience of being separate from his girlfriend and witness others get injured.

I looked at a coworker to my right. He was giving me a look I had never seen before. The next thing I knew, everybody from the front of the line was running at me. Somebody yelled, ‘Shots fired, somebody is shooting.’ I just followed the group through the back door.

Before Hill could get to Gomez, though, he helped other friends who had been shot by Ford. As he helped a friend who had been shot in the arm, Hill got some of his coworker's blood on his shirt. When Gomez finally found her boyfriend, she worried that he had been injured after she saw the blood all over his clothes.

I look over and I see Russell, which put me in a panic too because he’s covered in blood. I finally got to him and the first thing he said to me was, ‘It’s not my blood.'