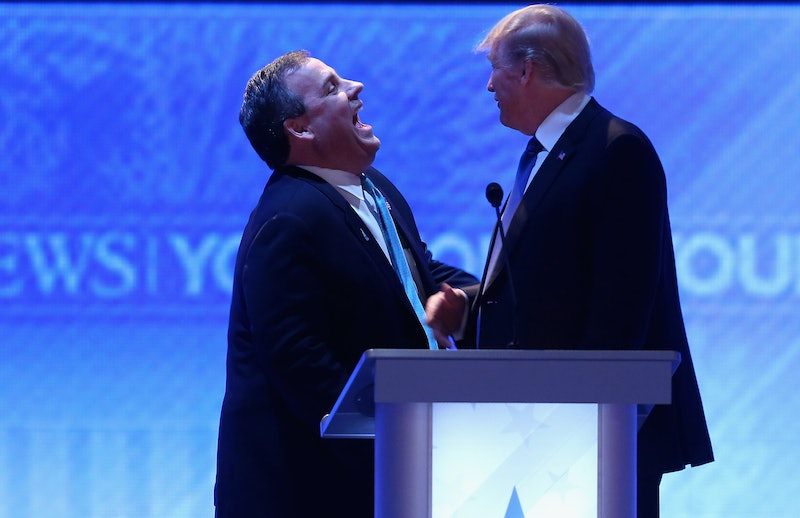 While the race for the Republican nomination already had a frenetic, circus-like quality to it, it took yet another sharp twist off the party establishment course when Chris Christie endorsed Donald Trump. At a press conference in Fort Worth, Texas, the New Jersey governor said he was “proud to be here to endorse Donald Trump" and had faith that Trump “will do exactly what needs to be done to make America a leader around the world again." It was an outpouring of political affection that was completely unexpected from the pugnacious senator — or was it?

Looking back on Christie's campaign, there's plenty of evidence that he would eventually throw his support behind Trump. Throughout the many (many) debates, Christie preferred to take aim at pretty much anyone who wasn't Trump. Sure, part of that was a hesitancy shared by many Republican candidates to attack the frontrunner. Still, for the normally bellicose Christie, his timidity towards Trump stood out. At FiveThirtyEight, Nate Silver noted before the New Hampshire Primary, "Christie has repeatedly declined to pointedly criticize Trump," choosing not to take shots on multiple occasions.

As Silver and others have noted, Trump and Christie actually are friends — or at least they were before the Republican race (and, certainly appear to have mended fences with this endorsement). In fact, when Trump appeared on ABC's Good Morning America earlier this month, he bristled when asked about Christie saying he wouldn't last. “I know him and I guess he used to be a friend until this all happened,” Trump said.

Perhaps the most revealing moment in Christie's long unwillingness to fully turn his attack dog-style on Trump during his campaign was during his last appearance at a Republican debate. Days before he came in sixth place in the New Hampshire primary, Christie focused his famous vitriol on Sen. Marco Rubio, rather than Trump.

The debate will almost certainly go down as one of Rubio's weakest moments of his campaign, with Christie ripping him to shreds. “There it is. There it is. The memorized 25-second speech. There it is, everybody,” Christie cried for all of America (or the relatively small segment watching a Saturday night debate) to see.

When asked by Yahoo!'s Joe Ward why he didn't go after Trump, Christie responded, “I do so at a time and place of my choosing. There’s no need for me to do that now."

That debate performance didn't help Christie, and it certainly didn't help Rubio. The only one who may have gained from the spectacle was Trump, which almost seems fitting in light of Christie's endorsement.