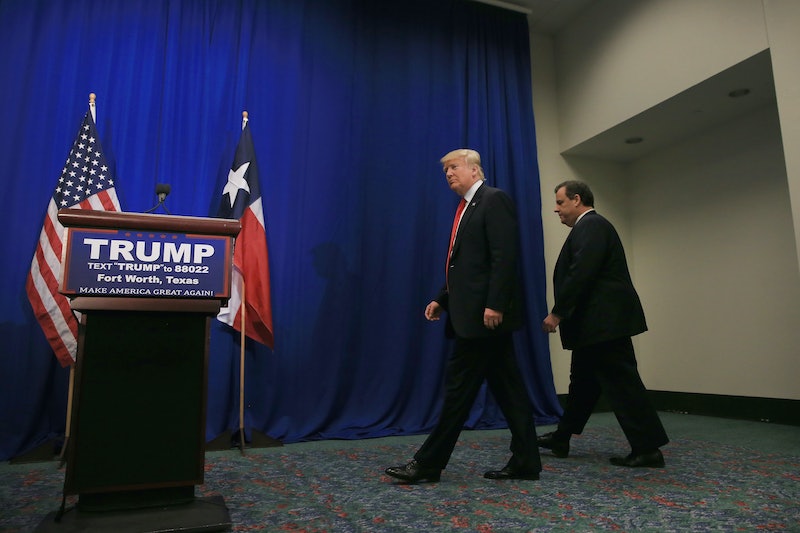 On Friday, New Jersey governor Chris Christie formally endorsed Donald Trump for the Republican nomination at a press conference in Fort Worth, Texas, raising suspicions that he could be positioning himself as the real estate magnate's vice presidential running mate. Christie was the first former GOP candidate to back Trump; the rest have either continued to bash his angry tactics or simply remained silent. Because Christie's glowing endorsement of Trump seemed to be the first step toward the VP position, it left many wondering what a Trump-Christie 2016 ticket would look like.

Christie was adamant in his endorsement speech that Trump is the only GOP candidate who can win the White House. "The single most important thing for the Republican party is to nominate the person who gives us the best chance to beat Hillary Clinton," he said. He described the Republican frontrunner as a good friend, a man of his word, and a resolute and strong leader — much like a vice president would boast about his/her presidential counterpart. Neither Trump nor Christie completely shot down the idea of running together in November, both saying they hadn't talked about it. "I haven't been offered any position and I don't speculate on those things," Christie said, while Trump also denied that a conversation took place, but added that the governor "certainly has a lot of talent." It's all very suspicious.

If the two men are prepping for a presidential and vice presidential run together, a Trump-Christie 2016 ticket will certainly grab voters' attention. Here's what to expect.

God bless America's eardrums. Christie is perhaps the only politician who could even compete with Trump in a shouting match, as made evident in the GOP debates. Both men are known for angry outbursts, so the two of them together would lead to some very loud campaign rallies and speeches. Just go ahead and turn the volume on your TV down a few notches.

You've probably heard about the ginormous wall Trump wants to build to keep Mexicans from crossing the border into America by now, and Christie would only reinforce the idea. The New Jersey governor hasn't advocated for a 1,000 mile-long wall all the way across the border like Trump, but he did call for one where appropriate (mainly in urban areas) in his failed presidential campaign. It's easy to imagine him adopting Trump's harsher immigration agenda in order to join the GOP ticket.

Both Trump and Christie think the current tax code is way too complicated. Trump already released a tax plan that would reduce the seven tax brackets in place now to only four — 0 percent, 10 percent, 20 percent, and 25 percent. While Christie didn't have a detailed plan like Trump's, he wanted to simplify the system for individuals filing their income taxes. Because both men feel strongly that the tax code needs major reforms, they would likely make it a priority.

Fellow GOP candidates have repeatedly called out Trump for only recently becoming a Republican, and it turns out Christie and he share a more liberal past on the subject of abortion. In a January op-ed for The Washington Examiner, Trump said he's pro-life, writing: "I did not always hold this position, but I had a significant personal experience that brought the precious gift of life into perspective for me."

Similarly, Christie used to be pro-choice, but changed his stance on the issue in 1995 after hearing his oldest daughter's heartbeat at 13 weeks. While running as a Republican in the Morris County freeholder race in 1994, Christie told The Star-Ledger about privately supporting Planned Parenthood. He said: "It's also no secret that I am pro-choice... But you have to examine all the agencies needing county donations and prioritize them. I would consider all groups looking for funding, but there is a limit and we have to pick and choose."

They've both changed their tune now, which could be a little problematic for pro-life Republican voters who don't fully trust their newfound beliefs.

Of course, any Republican ticket will be in opposition to Clinton (or Bernie Sanders), but a Trump-Christie duo would be relentless — neither holds back when it comes to criticizing or insulting their rivals. Because their attacks are often personal and not policy related, Bill Clinton's affairs and alleged sexual assaults would probably come up, not to mention a few sexist remarks.