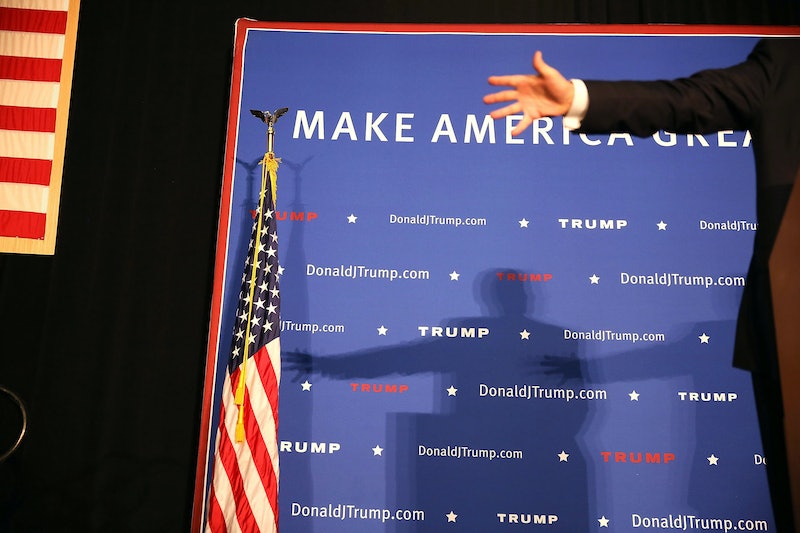 In a surprising-but-not-surprising development, Chris Christie endorsed Donald Trump for president on Friday morning. It was surprising because Christie was supposed to be one of the semi-reasonable Republicans, not the crazed "burn the house down" Republicans. But it also wasn't surprising, because the 2016 primary has been a constant reality-shredding experience. The Republican race in particular has already shaken the underpinnings of our collective sanity, and Christie endorsing Trump is simply the latest natural progression of this surreality.

At a joint press conference, Christie called Trump "a good friend," and said he'd do "whatever he needs to do" to get Trump into the White House. These comments would have been a surprise to the Chris Christie of six months ago, who proclaimed that Trump lacked the "temperament" to be commander-in-chief.

That's a pretty unambiguous comment. One might argue that it's the most damning possible thing you can say about a presidential candidate— that they aren't suited to be president. It's a pretty hard statement to walk back, but then again, so what? Donald Trump actually said that he could shoot somebody without losing any votes, and none of his supporters batted an eye. This is a presidential cycle where a retired neurosurgeon who thinks the Egyptian pyramids were used to store grain was once leading the polls. Why not endorse a guy who you literally said wasn't suited to be president?

This pretty much sums it up...

At the risk of making a fool of myself by looking at this logically, there is a logical explanation for this.

Christie is a term-limited, hideously-unpopular Republican governor of a blue state, which is a nice way of saying that his political career is finished. Unless, that is, he endorses the future Republican nominee right before Super Tuesday. Were Christie to do that, he might have a shot at the vice presidential slot, or even a cabinet appointment in a Trump administration. Maybe Christie is simply backing the winning horse.

Another possibility, not mutually exclusive with the last, is that Christie wants to ensure with 100 percent certainty that Marco Rubio does not win the Republican nomination. Christie really seems to despise him for some reason, and he announced his endorsement of Trump the day after Rubio's surprisingly competent debate in Houston. The timing wasn't accidental: Rubio was surely hoping to stretch that good debate performance into a positive news cycle or two, but that isn't going to happen now, because we're all talking about the Christie endorsement. After giving Rubio a wedgie before the New Hampshire primary, Christie has now shoved the junior senator into a locker and taken his backpack.

Trump, for his part, confirmed this theory when he used his speaking time at the Christie press conference to — no surprise here — make fun of Marco Rubio. Specifically, he made fun of Rubio's well-documented affinity for water bottles.

So, to recap: After accepting the endorsement of a man who once said he was temperamentally unsuited to be president, GOP frontrunner Donald Trump mocked a guy for drinking water. The 2016 Republican primary, ladies and gentlemen.