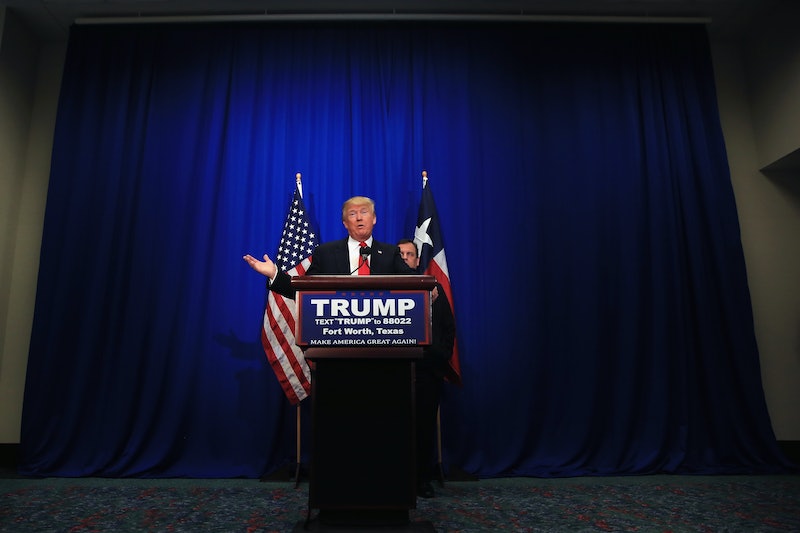 Donald Trump and Chris Christie are.... friends? At least, that's what the New Jersey governor said when he endorsed the Donald on Friday. The two have known each other for 13 years, and Christie was one of the guests at Trump's wedding, where the real estate mogul married his third and current wife, Melania. Christie's surprise endorsement is a big one, and what's truly puzzling is the fact that Christie would endorse Trump, especially after their verbal sparring prior to Christie ending his campaign. These six terrible things Trump has said about Christie are but just a few examples of the many ways the Donald hasn't had his fellow politician's back.

Trump's angry remarks are not without reciprocation, either. Over the course of Christie's campaign and even up until a few weeks before endorsing the Donald, he had plenty of disparaging things to say about Trump. Christie has attacked Trump repeatedly for everything from his debate demeanor to his lack of experience and shaky policies, including Trump's suggestion to temporarily ban all Muslims from entering the country.

Sure, there are instances where Trump has truly stood up for Christie, as when he tweeted that 2012 GOP presidential nominee Mitt Romney should consider the governor to be his running mate. More often than not, however, it seems that the relationship between Trump and Christie has been anything but cordial.

During a speech at a Greater Charleston Business Alliance event in Charleston, South Carolina in Sept., Trump took aim at Christie in one of the most petty attacks the frontrunner has lobbed since announcing his candidacy. Trump poked fun at Christie for perspiring heavily during a CNN-hosted GOP debate earlier in the month. "That room was hot. I mean, poor Chris Christie! No, it's true. He's a nice guy. It wasn't fair. it was an amazing thing; I was like a piece of water," Trump said. He laid to waste his fellow candidates in a series of attacks that touched on everything from Marco Rubio's hair to former candidate Mike Huckabee similarly sweating on the debate stage.

The Donald has repeatedly gone after Christie regarding the controversial Washington Bridge lane closures that ultimately led to a U.S. Senate investigation. Christie has denied even knowing about Bridgegate, though Trump finds that hard to believe. Trump openly mocked Christie at a rally in Raleigh in Dec., to laughter from his supporters. The real estate mogul laid out just how outlandish he felt about Christie's claim that he would have no knowledge of the lane closures. Trump said:

The citizens of New Jersey haven't exactly been all that pleased to have Christie as a governor during his second term. Heading into the new year, his popularity leading the Garden State was at an all-time low of just 31 percent in January. Trump certainly took notice and has repeatedly pointed out New Jersey's credit downgrading under Christie. "You know the people in New Jersey want to throw him [Christie] out of office," the Donald said at a rally in Nashau, New Hampshire at the end of Dec, before further criticizing Christie for continuing to run. Trump continued:

I love New Hampshire, but he [Christie] shouldn't be up all the time. He's supposed to be running the state [of New Jersey].

Of the many ways that Trump attacked Christie over the course of his campaign, very few verbal sparring matches had to do with actual policies that would affect the entire country. Merely one moment stands out in which the Donald took aim at what he saw as a problematic suggestion to cut Medicare and Social Security by Christie. Speaking to seniors at a rally in Manassas, Virginia at the beginning of Dec., Trump had this to say:

Now, you have waste, fraud, abuse in Social Security and Medicare. We’ll take care of that. But you’re not going to be cut. You’ve been paying into your plans, you’ve been paying into Social Security for years... I think it’s unfair that after all these years they want to cut you. Governor Christie wants to raise the age so that you have to wait another, you know, pretty extended period of time. It’s not fair.

One of the first public moments in which Christie and Trump's friendship appeared to be disintegrating occurred during a Good Morning America appearance the Donald made at the beginning of February. Trump got very defensive when asked about the New Jersey governor's claim that the new politician's campaign momentum would fade over time. He took his attack to whole new heights, questioning his very relationship with Christie while also insulting his home state and past political failings. Trump said:

Even Christie's handling of Superstorm Sandy came under fire over the course of his campaign. Trump especially took issue with Christie's warm response to President Obama. The GOP frontrunner questioned Christie's loyalty to the party and openly mocked his embrace of the commander in chief during a particularly trying time in his career. Trump said:

I mean, it was certainly not good. When I saw it, 'I said I think he’s going to vote for Obama.' Honestly, it was terrible... I don’t call it a hug, I call it a hug mentally. It was unbelievable. He was like a little boy! 'Oh, I’m with the president.' Remember, he flew in the helicopter and he was all excited to be [on] the helicopter. I said, I would have put you in my helicopter. It’s much nicer.