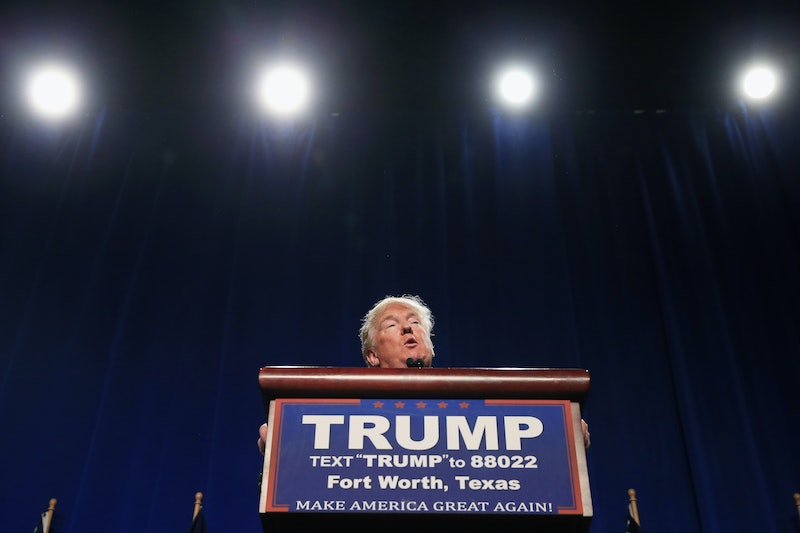 It's political theater at its finest. A billionaire business mogul with former close ties to the Democratic Party has taken control of the opposition party and cultivated a new movement among conservative Americans — all the while pissing off the establishment. Yes, despite every racist, sexist, xenophobic thing he's said, Donald Trump could win Super Tuesday, as he's still by far the leading Republican presidential candidate. In the words of former Republican candidate Sen. Lindsey Graham, the Republican Party "has gone batshit crazy."

On Tuesday, March 1, more than a dozen states will hold primary elections. It's Super Tuesday, and the jam-packed day already has Republicans scheming. Trump — the candidate everyone loved to hate and, well, still does — has taken a comfortable lead in every state set to vote on Tuesday. Although Senators Marco Rubio of Florida and Ted Cruz of Texas have been stumping hard to catch up, no candidate has been able to garner the same fierce momentum of Trump and his "Make American Great Again" devotees. In fact, he seems to be accelerating, with no red lights in his path.

According to the latest poll data accumulated by Real Clear Politics, Trump currently has the lead in Alabama, Virginia, Massachusetts, Florida, Michigan, Illinois, and Wisconsin. Where Trump continues to struggle to win over voters is Texas (Cruz's home turf).

The latest polls from the Austin American-Statesman and Monmouth University place Cruz in first place in Texas; both found that he is currently polling at 38 percent. Meanwhile, Trump is looking at a second-place finish in Texas, with Rubio coming in third.

But Trump's likely second-place finish in Texas will not be a huge disappointment for the businessman-turned-reality-TV-star. He has the overwhelming lead in a number of other big-name states, including Florida and Michigan. Although Florida is Rubio's home state, Trump is currently polling at 45 percent there, according to a poll released Feb. 25 by Public Policy Polling. Rubio trails the flashy frontrunner by 20 percentage points. The latest data from Quinnipiac University had similar results, placing Trump at 44 percent and Rubio clinging to 28 percent.

Trump also has a clear lead in Michigan; the latest Fox 2/Mitchell poll found Trump to be polling at over 40 percent there. Rubio and Cruz, however, are battling it out for second place.

So will Trump win Super Tuesday? The odds are well in his favor — unless the GOP finally pulls the brake on him come Tuesday morning. But when looking at the number of delegates Trump needs to win, the current frontrunner is in a safe place. Trump has already claimed 82 delegates from Iowa, New Hampshire, South Carolina, and Nevada.

According to The Washington Post, Trump truly only needs to win 246 more delegates — out of the 624 available on Super Tuesday — to secure his path to the Republican nomination. It seems likely that he'll garner those delegates on Tuesday — unless, of course, someone can put a damper on Trump Mania.