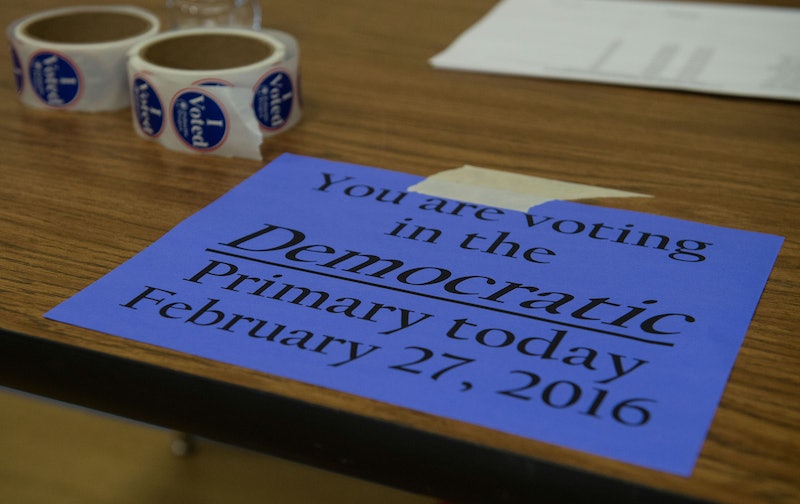 On Saturday night, Democratic presidential candidates had the opportunity to make their presence known in the "first in the south" primary. The South Carolina Democratic primary pitted frontrunner Hillary Clinton against Bernie Sanders following an incredibly close Nevada Caucus that saw the former Secretary of State only barely edge out the Vermont senator. Known for its more quirky qualities, such as a "luck of the draw" tiebreaker in which the highest card would win a candidate a caucus site, Nevada set the stage for some pretty solid social media hijinks. The South Carolina Democratic primary memes and jokes emerging following Clinton's decisive victory set a completely different tone, however.

Clinton supporters are beyond thrilled by her big win, which was announced mere minutes after polls had closed. Election officials were expecting it to be a long night, yet Clinton won by a landslide. Due to the fact that the Palmetto State holds a primary instead of a caucus, voting is open to not only Democrats but Independent voters. Needless to say, turnout appears to be fairly impressive. Approximately 54,000 absentee ballots alone have been cast, a majority of those stating #ImWithHer. The many memes and jokes emerging on Twitter and beyond have only cemented that fervor for Clinton.

Between the hilarious gifs and one-liners, there's a message of solidarity, as Clinton appears poised to nab the Democratic presidential nomination. Clinton's South Carolina Democratic primary victory speech was perhaps her most emotional oration yet following a primary or caucus this election season. The presidential hopeful evoked the Bible, citing a verse in first Corinthians in which love and kindness take precedent. Clinton also vowed to focus on a myriad of issues that include more than just enacting regulations on big banks. For that reason, social media appears to be far less willing to dig deep when it comes to jokes and memes.

Instead, what has been emerging on Twitter have been mainly gifs and one-liners celebrating Clinton's victory with the type of bravado better reserved for Republican frontrunner Donald Trump. The juxtaposition of celebrating the candidacy of Clinton — a politician certainly not known for being braggadocios — and brazenly flaunting such a victory lends substantial humor to an evening that has been far more subdued than expected. As both candidates and voters look towards Super Tuesday, political junkies are undoubtedly taking stock of their celebration memes in what may very well cement Clinton as the Democratic presidential nominee.