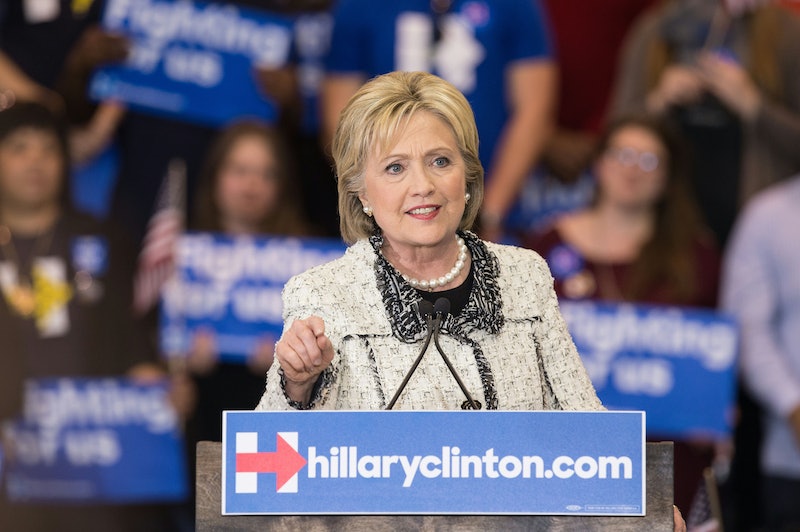 Well, that's one more down! The South Carolina Democratic primary is over, and it took just two or three seconds after the polls closed for every news outlet under the sun to project who won: former Secretary of State Hillary Clinton, who's got the race firmly in her grasp once again. She's been the presumptive frontrunner for months, even though she suffered a blowout loss to Vermont senator Bernie Sanders in New Hampshire. But now the math is starting to add up ― so, how many delegates did Hillary Clinton win in the South Carolina primary?

That's what it's all about, after all: those precious, precious delegates. Thanks to the Democratic Party's unpledged superdelegate system, Clinton has a strong built-in advantage from the get-go ― the superdelegates are largely made up of party officials and get to choose who they support regardless of the vote totals, and they're overwhelmingly likely to back her campaign. But in South Carolina, she cleaned up the lion's share of the pledged delegates too, completing an all-out shellacking of Sanders' long-shot campaign in the Palmetto State, and securing herself a clear, easily foreseeable path to the nomination.

So, how'd the numbers shake out for Clinton on Saturday night? It's a pretty simple answer: she cleaned up.

South Carolina's delegates are awarded proportionally, which under normal circumstances might let a runner-up like Sanders escape the state in reasonably competitive straits ― if he'd lost by five points, for example, instead of the 50+ point loss he took on Saturday. As it stands now, Clinton is heading out of South Carolina with a whopping 39 delegates, against just 14 for Sanders.

To be clear, losing South Carolina isn't coming as a surprise to Sanders or his campaign. The brutal extent of the loss, maybe, but not the simple fact that he lost. He'd all but given up on the state in the week leading up to the primary, spending most of his time in states that'll be coming up throughout the month of March.

But even for all that work, it's looking like things could get pretty bleak for Sanders in a matter of days. On Tuesday ― Super Tuesday, that is ― there will be a whopping 865 delegates at stake, across 11 different states that will be casting votes in the Democratic race. In eight of those states, he's trailing by seemingly insurmountable margins.