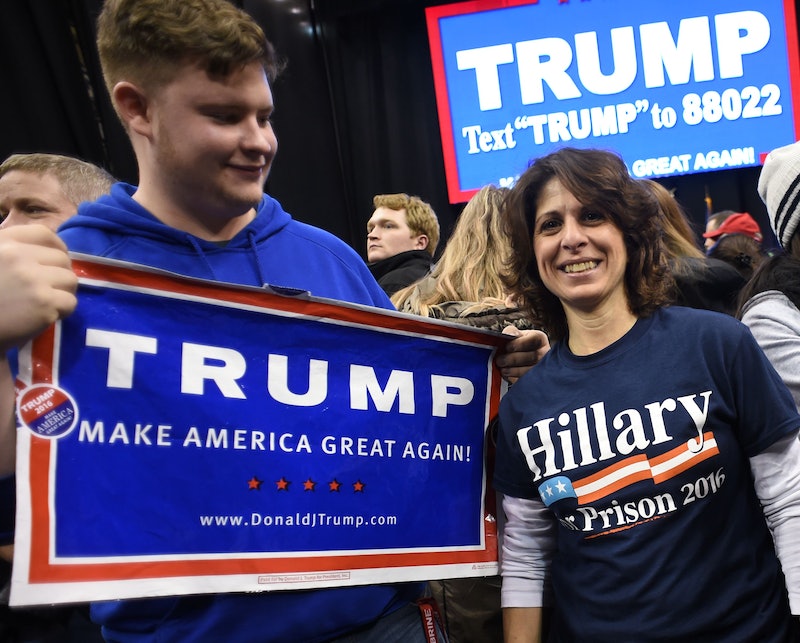 After winning a clear and decisive victory in South Carolina's Democratic primary on Saturday, former Secretary of State and presidential candidate Hillary Clinton seemed to suggest that she had her party's nomination all locked up. In her victory speech, Clinton took a jab at Donald Trump, clearly calling the Republican frontrunner out for his well-known campaign slogan and his controversial platform. She hasn't quite made the ticket yet, but Clinton definitely gave some indication to how she'd take on the outspoken business tycoon in what is increasingly starting to seem like an inevitable matchup.

Speaking to a lively crowd at her South Carolina headquarters shortly after it became clear that she had won the state's primary by a wide margin, Clinton preached love and kindness in much the same way that President Obama campaigned on hope and change. In taking on Trump, Clinton challenged his notion that America isn't already great. What America is not, according to Clinton, is whole.

Building walls — one of Trump's top priorities — is not the way to make America whole, according to Clinton. Her entire speech in South Carolina, in fact, focused on breaking down the barriers that separate Americans from each other and the rest of the world. As she usually does, Clinton called for equal pay for women, a welcoming approach to immigration, and reproductive freedom.

In calling out Trump directly, Clinton seemed to affirm that she will win the Democratic nomination by the time the convention rolls around in July. After all, if she's more concerned with Trump than her more immediate competition from Vermont Sen. Bernie Sanders, then she's clearly confident that her victory in South Carolina is a significant step forward in the primary race. Beyond indicating the confidence in her campaign, Clinton's jab at Trump also implied that she could see Trump as her biggest competition from the right.

Ultimately, it's probably wise for Clinton to be prepared for a match-up with Trump, as she could be in trouble if that turns out to be the case. Polls in several states have shown that a Clinton-Trump match-up would end in Trump's favor. At the same time, though, Clinton doesn't fare well against other potential Republican candidates either, according to polls aggregated by RealClearPolitics.

After Saturday's South Carolina primary, Clinton seems to think she's running a two-person race, and it isn't Sanders she's concerned about. She'll take her campaign "national" on Sunday, as she promised in her victory speech, preparing for a race in front of the general population. As she heads into Super Tuesday, she'll have the momentum from South Carolina and the anti-Trump talking points on her side.