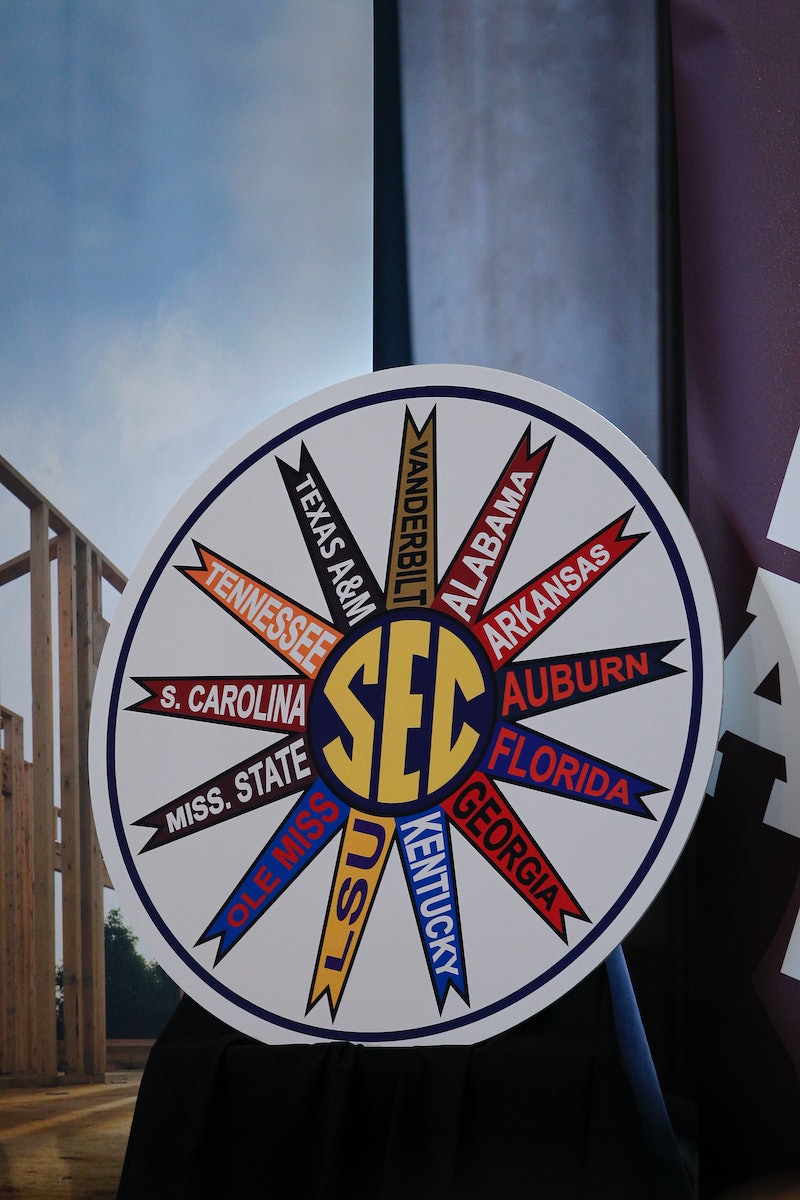 Voters in 12 states, American Samoa, and abroad will head to the polls (or their local caucus sites) on Tuesday as part of the much-anticipated Super Tuesday primaries, the next big step in this year's race to the White House. Hundreds of delegates are up for grabs in a single day of elections, and many of them will be allocated from states in one particular region of the country. Thanks to its focus on southern states, Super Tuesday has been dubbed the SEC primary.

If you're a sports fan or a southerner, you likely know that the acronym SEC refers to the collegiate athletics conference in southeastern states. In collegiate athletics, the SEC includes the flagship universities of Alabama, Arkansas, Florida, Georgia, Kentucky, Louisiana, Mississippi, Missouri, South Carolina, Tennessee, and Texas. Tuesday's primary schedule doesn't identically line up with the sports match-ups, but there's still no doubt that it's a big day for the South. It's the first real test for candidates from both parties in the southern states, aside from South Carolina, which finished its primary process on Saturday with a win for Hillary Clinton. As the election heads deeper into the South, the SEC could be the last campaign stop for some of the race's weaker candidates.

Among Tuesday's primaries are contests in the key southern states of Alabama, Florida, Georgia, Tennessee, Texas, and Virginia. On the Republican side, results in some of these states could be particularly troubling. Businessman-turned-politician Donald Trump leads the GOP's race by a wide margin heading into Super Tuesday, with more than four times the number of delegates of Florida Sen. Marco Rubio and Texas Sen. Ted Cruz. The competition has likely boiled down to a three-person race for the GOP nomination among these candidates, but Cruz hasn't won a state's vote since the early Iowa caucus, and Rubio has yet to claim any state's victory. With big delegate counts up for grabs on Tuesday, the SEC primary could be their best chance to overcome Trump at this point.

To up the ante even more, voters in Cruz's own state will participate in the SEC primary. Texas has a whopping 155 delegates to allocate based on Tuesday's results, the most out of all the Super Tuesday states by far. Most polls have predicted that Cruz will win the Lone Star State, but it's likely to be a close race either way. If Cruz does win, he could pick up enough delegates to equal or overcome Trump — but that's the thing about Super Tuesday, it all depends on how candidates do across several states. Even if Cruz does well in Texas, Trump is expected to do well enough to at least pick up delegates there, and he's also expected to win in several other states.

Ohio Gov. John Kasich and retired neurosurgeon Ben Carson are pretty much hanging on by threads heading into the SEC primary. It seems like they'll have trouble winning anywhere and everywhere. Their best chance could be to just pick up some delegates by reaching the minimum threshold that several states have set for acquiring delegates. In Texas, for instance, GOP candidates have to capture at least 20 percent of the vote in order to win any delegates. If history repeats itself, Kasich and Carson will have trouble just meeting those thresholds, based on previous primary results.

On the Democratic side of the race, Vermont Sen. Bernie Sanders has some catching up to do of his own. Sanders will head into Super Tuesday after suffering a significant loss on Saturday in South Carolina's Democratic primary. Despite winning the early New Hampshire primary and practically splitting the vote with former Secretary of State Hillary Clinton in Iowa, Sanders remains several hundred delegates behind Clinton, thanks in large part to superdelegates. Voters in Sanders' home state of Vermont will head to the polls, where Sanders is expected to win easily, but the South could hold the crux of the power on Tuesday for Democrats as well. Texas has more than 200 delegates to dole out, and Georgia has more than a hundred.

Until now, the race to the White House has unfolded one state at a time. As Super Tuesday moves the country that much closer to a nominee from both parties, the South will be a major focus for candidates. If they can't win in the so-called SEC primary states, their campaigns' validity will certainly be called into question, should they choose to stay in the race.