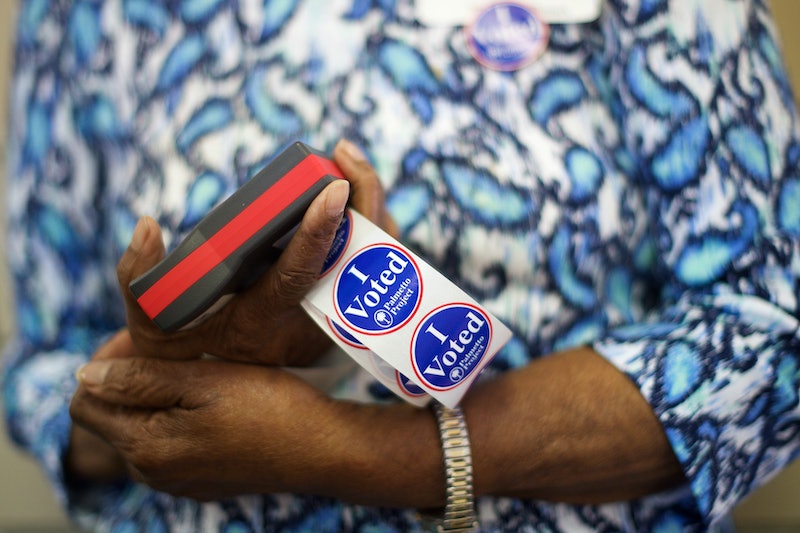 In anticipation of the biggest day of primary election season, NBC News released new Super Tuesday polls Sunday morning to the assured delight of Hillary Clinton and Donald Trump's campaigns. Clinton and Trump both appear to be maintaining their frontrunner status heading into Super Tuesday — NBC polled likely voters from each party in the three most delegate-rich Super Tuesday states and found that Clinton is leading in all three, while Trump is leading in two.

Texas, Georgia, and Tennessee, the three states polled according to NBC's new report, represent the biggest opportunities to pick up delegate this coming Tuesday, For the Republicans, 155 convention votes are up for grabs in Texas, 76 in Georgia, and 58 in Tennessee. Clinton and Bernie Sanders will battle it out for Texas' 222 delegates, Georgia's 89, and Tennessee's 58.

However, it doesn't look like Sanders will get much of a cut of that delegate count. Clinton is polling ahead of Sanders by a margin of 20 points in each state, meaning that Sanders will get some delegates in a proportional contest, but not enough to fight back against Clinton's growing lead. Clinton also already has the pledged support of 17 out of Texas' 29 superdelegates. Sanders might still have a chance to pick up a significant number of delegates since Democratic delegates are awarded proportionately on both a statewide and a district level, but there's no way to know if that's anything more than conjecture until Tuesday.

On the Republican side, Texas is the only real battleground for Trump, who has solid margins in both Tennessee and Georgia. Ted Cruz is dominating in his home state, which he won handily during his 2012 Senate race and can expect to win in the presidential primary if his 13 point lead over Trump holds until the polls close on Tuesday. Yet, delegate math comes into play again when you consider how behind Cruz already is in the race to the 1,237 delegates needed to secure the nomination. Cruz will need to blow Trump out of the water in the Lone Star State in both the statewide race and the congressional districts in order to make up for his lacking delegate count.

These results don't reveal anything particularly game changing — the numbers are pretty similar to previous polls, so NBC is supporting predictions more than shifting them. However, this poll does give pundits and candidates a more up-to-date idea of how voting will go down on Tuesday. If you're a Trump or Clinton fan, this is great news. If you prefer any other candidate, get ready for some concession speeches.