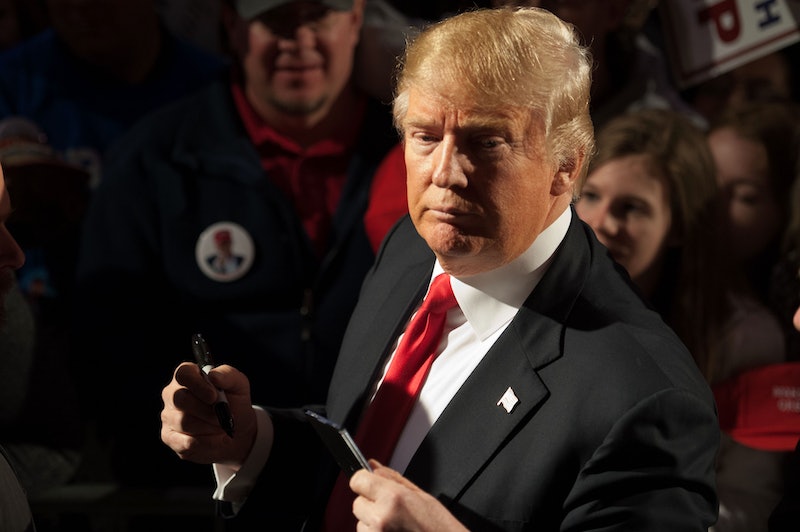 On Sunday afternoon, Alabama Sen. Jeff Sessions endorsed Donald Trump at a rally outside of Huntsville. This is Trump's first endorsement from a sitting senator, and comes shortly after the casino tycoon teased a "big surprise announcement" earlier in the day. Though Sessions generally keeps a low profile nationally, he's very well-known and popular in conservative circles. As such, his endorsement of Trump is a huge blow to Ted Cruz, who's been attempting to position himself as the only true conservative in the GOP race.

It shouldn't be a huge surprise that Sessions is endorsing Trump. Before entering the Senate, Sessions was a US Attorney who doggedly prosecuted black civil rights leaders and opposed the 1965 Voting Rights Act, referring to it as a "piece of intrusive legislation." Ronald Reagan nominated him to serve on the US District Court in Alabama in 1986, but that nomination was derailed when multiple former Justice Department employees testified that Sessions had made flagrantly racist comments as a US Attorney.

According to one testimony, Sessions had called a white civil rights lawyer "a disgrace to his race" for fighting to expand voting rights. A black attorney who served under Sessions claimed that Sessions called him "boy" and warned him to "be careful what you say to white folks." There were also numerous reports that Sessions said the he used to think the Klu Klux Klan was "OK" — until he learned that some of them were "pot-smokers." Sessions denied some of the statements and admitted to the others, claiming they were made "in jest."

Sessions continued along this trend after being elected to the Senate, calling a judicial nominee who'd defended anti-miscegenation laws "a leader for racial harmony," and eventually became frontline soldier in the fight against immigration reform in the Senate. Sessions struck up an alliance of sorts with Ted Cruz, once crediting the Texas senator for defeating the 2013 Gang of Eight immigration bill, and Cruz frequently and consistently boasts of his support from Sessions in an attempt to shore up his support among conservatives. As such, Sessions' endorsement of Trump is a big blow to Cruz's already-fledgling campaign.

With Sessions joining Team Trump, the Donald now has endorsements from sitting Republicans in the House, the Senate and state governor's mansions. Trump picked up his first congressional endorsements earlier in the week, when Reps. Duncan Hunter and Chris Collins threw their support behind his presidential bid. Days later, Govs. Chris Christie and Paul LePage became the first sitting governors to endorse Trump's White House run.