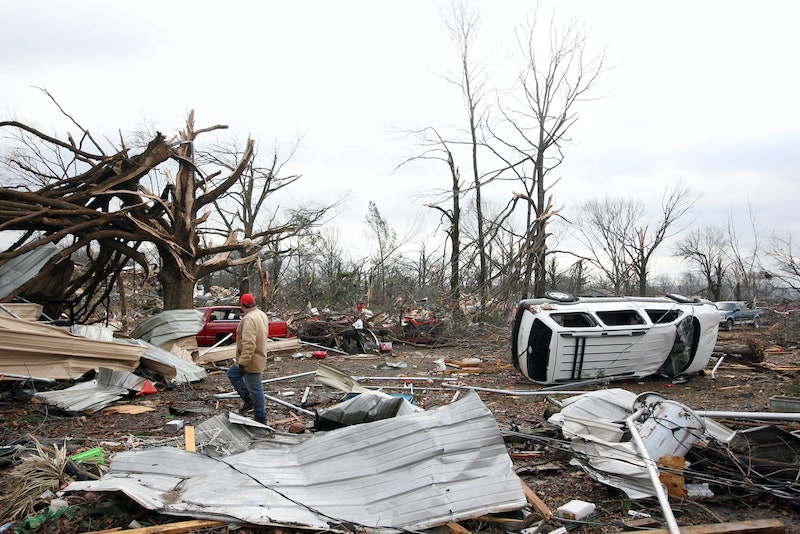 On Super Tuesday, the media tends to focus on the elections across the country that will play a big role in determining the Republican and Democratic presidential nominees. Back in 2008, though, the tight race for the Democratic nomination between Hillary Clinton and Barack Obama was upstaged by mother nature. A deadly outbreak of Super Tuesday tornadoes ravaged nine states — including some which were holding elections. The damage cost more than $1 billion, 57 people were killed, and another 425 were injured.

It has been more than eight years since the devastating storm system struck. A total of 87 tornadoes touched down over the course of more than 15 hours. Because it fell on such a politically important day, it has been called the Super Tuesday Tornado Outbreak. Polls had to close in Tennessee and Arkansas because of the dangerous conditions, and tornadoes also struck Missouri, Illinois, and Alabama, which were all holding primaries that day.

Ten of the tornadoes were deadly, and five were classified as "violent" EF4 on the Enhanced Fujita Scale (the new and improved measuring system instituted in 2007 which is very similar to the old F1-F5 system). The storm broke all kinds of records. One of the tornadoes went on a continuous 122-mile track through north-central Arkansas — the longest single track since record-keeping began in 1950. At the time, it was the worst tornado outbreak since 1985. It has since been eclipsed by the April 2011 Super Outbreak, in which 348 people were killed.

The tornadoes also hit populated areas. In Memphis, one twister nearly hit the international airport there, and was captured for a local TV station by a camera placed on the Memphis Hilton. In Jackson, Tennessee, a tornado touched down on the campus of Union University. Students sought cover in dorm bathrooms, and 13 were buried by rubble. Some 51 were hospitalized, but miraculously, no one died from that tornado.

The National Weather Service in Huntsville said that a midwinter outbreak is rare, but not unheard of. Weather conditions at the time were more spring-like. In some areas of the South, temperatures reached 80 degrees. In Alabama, the tornadoes struck in the overnight and early-morning hours, so some were asleep while the tornadoes hit, which was another cause of the high death toll.

This year, another severe weather event could strike. The Weather Channel reported that conditions are not like they were in 2008, but storms could affect much of the same area. The worst would probably be Tennessee and northern Alabama. Tornadoes could even be possible if temperatures get high enough, but damaging winds and heavy rains are more likely. A more limited storm could affect the Texas-Arkansas-Louisiana area. Weather would likely be worst in the morning hours, so only early-morning voters would be affected. People could still head to the polls later in the day without issue.

If you live in one of the affected areas, download a weather app to stay safe. And make sure to head to the polls, too.