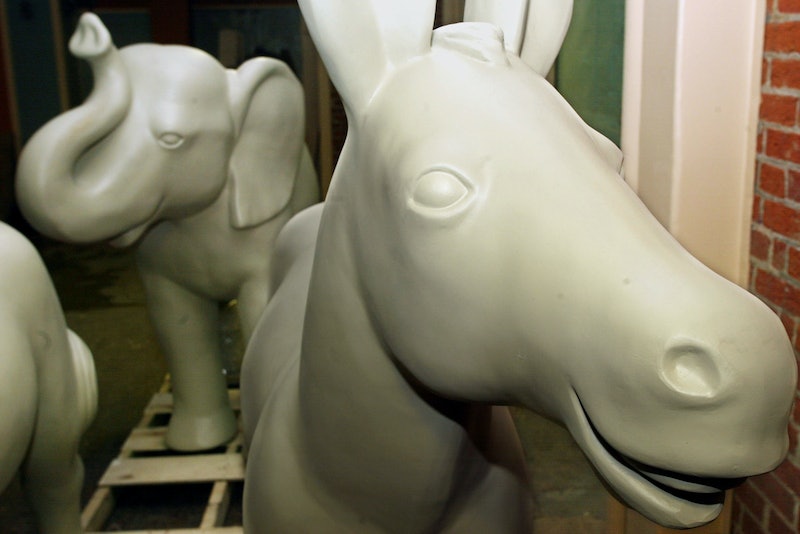 Just in case you've been living under a rock for the last few months, it's election season. People vote, candidates are whittled down, and (in theory) a clear nominee appears in each party, carrying them through to the nomination process at the party convention. The Democrats and the GOP generally follow the same framework with the same ultimate goal: to decisively choose a candidate who will compete well in the general election and fire up the base, turning out voters. But the way each party gets there is quite different. Democrats and Republicans don't have the same primary process, because each get to make their own rules.

There aren't federal laws that enforce a certain schedule for primaries, or a specific manner in which delegates must be handed out. It's down to each party's bylaws. Therefore, both parties tinker, make changes, and set things up in ways that they think will be most beneficial for the ultimate face-off in November. To better understand recent changes, it's important to look at when the primary process for choosing presidential nominees began. It really wasn't all that long ago.

Some of the early systems left the people out of it. Back in the early 19th century, members of Congress in the Democratic-Republican party (that was a thing) voted for their candidate. The people were not involved. That gave way to nominating conventions — in theory, much like we have today. But back then, the delegates were not there to represent the popular vote from their state or congressional district. Elites who had been chosen as delegates would vote in various rounds until one candidate appeared to gain a consensus.

That lost favor in the early 20th century. Progressive reformers wanted to take the power out of the hands of local party bosses and give it back to the people. This was not the only change — they pushed for the direct election of senators, for example. The first primary was held in Oregon in 1910. The state's delegates were bound to vote for the winner at the national convention. After World War I, though, momentum for change faded, and very few people had been showing up for the primaries.

That changed after World War II, though, and many states established primaries in an effort to champion the country's egalitarian ideals. Turnout nearly tripled from 1948 to 1952, and then television was invented, allowing candidates to reach voters directly and perhaps bypass others with more seniority in the party. The rules, though, were not very well-developed, which led to the occasional upset at the convention.

In 1968, the Democrats had a big mess on their hands after President Lyndon Johnson said that he would not run for reelection. At the time, only 13 states had Democratic primaries — far from a majority of the country. Eugene McCarthy was running on an anti-Vietnam-War platform. Bobby Kennedy joined the race too, but was assassinated in California right after winning the primary there. In the end, Vice President Hubert Humphrey was chosen by the party elite, despite not winning a primary. He went on to lose to the GOP nominee, Richard Nixon.

That mess of a convention — held in Chicago, where streets were filled with antiwar protesters — was a turning point. The Democratic Party's McGovern-Fraser Commission went on to institute reforms that required greater transparency in how states allocated their delegates. Many decided to use primaries to determine how to allocate their respective delegates. The Republicans followed suit — in part because some states had passed laws to meet the Democrats' reform plans, but the laws applied to both parties.

Nowadays, some of the more contentious elements of the primary season, like the calendar, the delegate count among states, and the process of delegate allocation, is all decided by a mix of interests within the party at both the state and the national level. The thought at the state level is that you have more sway nationwide with an early primary. To counteract this, the Republican National Committee said that states get fewer delegates if they hold their races too soon. This fight played out over the last eight years, explaining the number of states holding races on Super Tuesday dropping by more than 10 between 2008 and 2016.

The big change for this year was with the Republicans. They shrunk the portion of the race during which delegates have to be awarded proportionally. The thought was that the practice slowed down the nominating process and hurt Mitt Romney in 2012, because he spent too much time working to win the nomination and had less time to go up against Obama. So now more states can hand all their delegates to the winner, which could help someone like Trump — who's in first but with just a plurality — win the nomination.

Clearly, the process is more than a bit complicated. But there is one thing you can count on: It's likely to change by the next go-around in 2020.