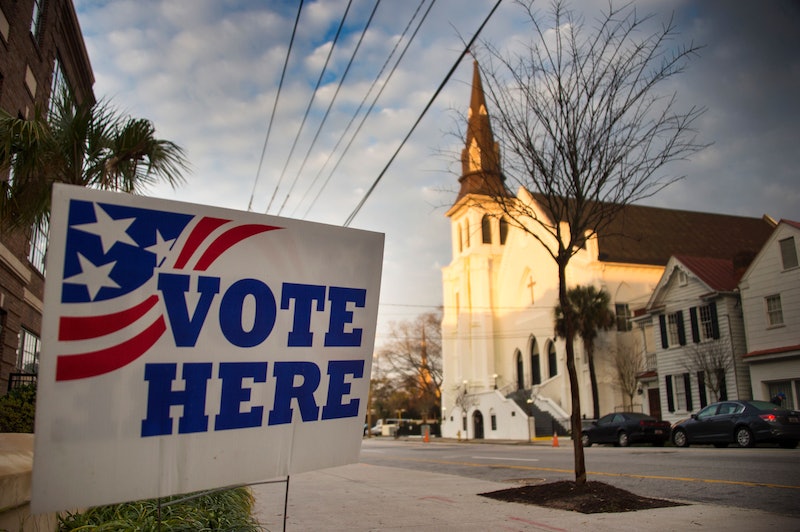 Even though people vote for their preferred presidential candidate on Super Tuesday, they are not directly electing who will be on the Democratic or Republican Party tickets in November. The people who do that are the delegates — party members who are usually elected to go to their respective convention and vote on their state's behalf. They vote in accordance with the results of the primary — usually. But there is more than one type of delegate. For example, there are unbound delegates, who used to be able to vote as they saw fit. Unbound delegates only exist in the GOP, and they've seen the most changes in recent years.

Whether a delegate is required to vote as decided by the state's primary or caucus depends on a couple of things, though: 1) which party they belong to, and 2) what type of delegate they are. First, just to go over the lingo: unbound and bound delegates are in the Republican Party. The Democrats have pledged delegates and unpledged delegates, or superdelegates. Superdelegates can vote for any candidate they want to, and consist of former and current party officials and office holders.

The pledged delegates are supposed to vote as their state caucus or primary dictated, but technically, it's just a pledge. They sign a form saying they will vote for a certain candidate, but doing otherwise does not break any law. In fact, when a candidate drops out of the race, the delegates are often given the option to support a different candidate (although this year, only Hillary Clinton and Bernie Sanders have gotten any delegates, so that's kind of a moot point).

The GOP is simpler, though. They have bound delegates, who are compelled to support a candidate as decided by a primary or caucus. They have to support their candidate no matter what — or as their state's rules dictate. So maybe that's until the third round of voting, or perhaps they can switch when their candidate quits. So perhaps even a delegate bound to Jeb Bush, who now is no longer in the race, would have to vote for him for a round or two. It all depends on the state, though.

Then there are the unbound delegates. They're three members of the state's GOP — typically the state party chair, the national committeeman, and the national committeewoman. They used to have the freedom to choose whatever candidate they wanted. No longer, though. This year, the GOP refined its rules to give the process a more democratic slant. The unbound delegates will be "be bound in the same manner as the state’s at-large delegates." With a few complicated asterisks and some fine print, it essentially means that they are not really "unbound" anymore.

This is much easier than the process used in 2012, and the GOP has done a good job of making the convention nominating process simpler. Now if they could all just be called the same thing and allocated the same way, then we'd really be talking.