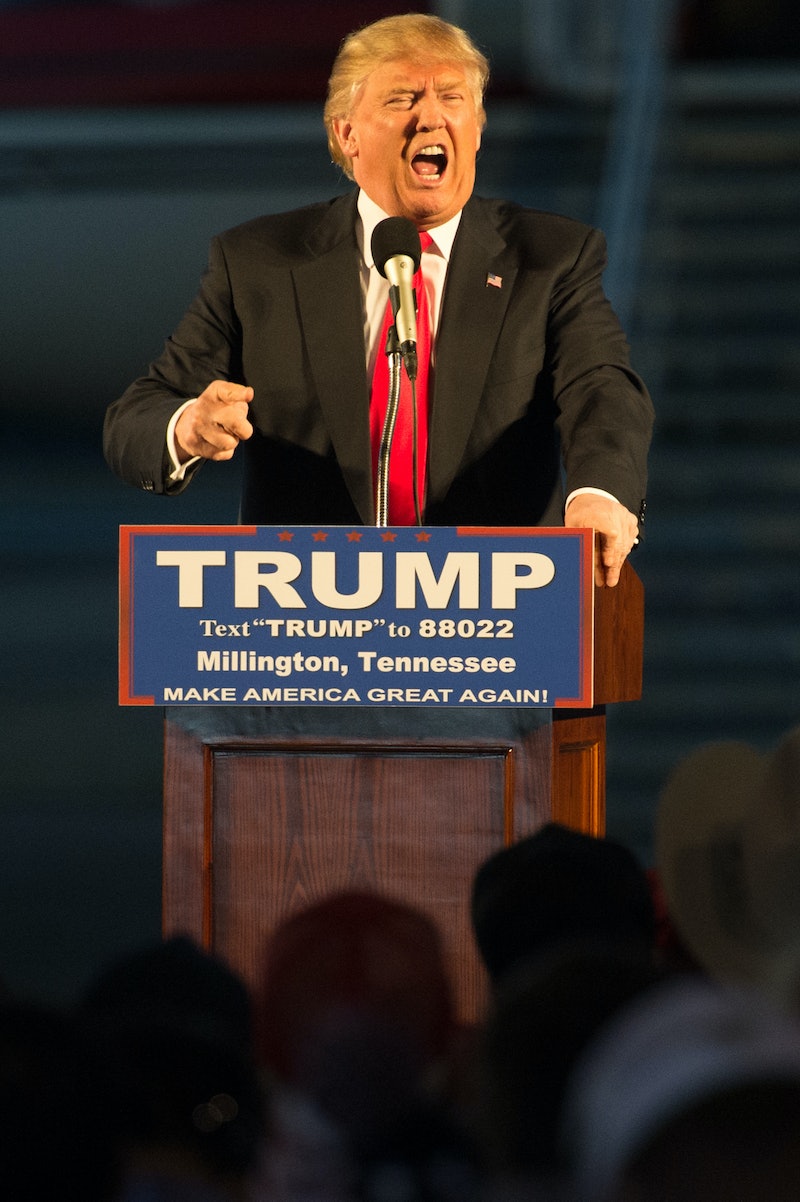 On Sunday, John Oliver unleashed a scathing 22-minute-long critique of Donald Trump, ripping apart Trump supporters' claims that he is honest and tough with example after example of lies, pettiness, and whiny behavior from the Republican front-runner. Oliver concluded that, in the face of so many facts that disprove the candidate's worthiness of support, his appeal can be chocked up to branding — the Trump name, appearing on everything from buildings to steaks, looks and sounds like success. In an effort to "break the spell" of this branding, Oliver dropped a bomb: Trump's family name was originally "Drumpf," a decidedly less powerful and impressive-sounding name. Why did Trump's ancestors change their name?

Oliver isn't the first person to note that Trump's family name was once Drumpf. Journalist Gwenda Blair wrote a book entitled The Trumps: Three Generations That Built An Empire, in which she stated that the name change of the family of winegrowers occurred during the Thirty Years' War (1618 to 1648), according to The Boston Globe. But other media outlets reported a different story. The International Business Times, for example, said that Trump's grandfather changed the name after immigrating from Germany to America in 1885. Without an official story on when the name change took place, we can't know for sure why it did, though perhaps the spelling has gone back and forth over the years.

Donald Trump's grandfather Friedrich Drumpf did change his name to Frederick Trump after immigrating to America, and an easy assumption would be that he wanted to Anglicize the name. Many immigrants did this over the centuries once arriving for a number of reasons, from avoiding discrimination to assimilating more quickly to improving their business prospects, reported The New York Times. And Trump is a very good name for business — not just because it's easy to pronounce, but because of how it strikes the ear and certain connotations that come with it.

"Trump" is firm; it's punchy; it sounds powerful (contrasted with "Drumpf," which is more like the sound a wet Whoopee cushion might make). It carries tones of strength and success; The Boston Globe noted that the word "trump" is associated with the sound of a trumpet, and with cards that rank above all others in various card games. And Donald Trump's constant reference to his wealth and success certainly bolsters these associations.

John Oliver, for his part, is hoping to break them by blowing up the "Drumpf" name. The Trump brand, with its bravado and its fearless "say-anything" quality, has cast a sort of spell over a significant portion of the American electorate. "I get that the character of Donald Trump is entertaining and that he says things that people want to hear. And I know his name is powerful. ... The very name Trump is the cornerstone of his brand. If only there was a way to uncouple that magical word from the man he really is." said Oliver.

And that's where Oliver's line of "Make Donald Drumpf Again" swag, and his Chrome extension that changes "Trump" to "Drumpf" wherever it may appear on the interwebs, come in.

Drumpf is much more reflective of who he actually is. So if you are thinking of voting for Donald Trump, the charismatic guy promising to make America great again, stop and take a moment to imagine how you'd feel if you just met a guy named Donald Drumpf, a litigious serial liar with a string of broken business ventures and the support of a former Klan leader who he can't decide whether or not to condemn. Would you think he'd make a good president, or is the spell somewhat broken?

Of course, it would be unfair to dislike a candidate because he had an unpleasant-sounding name. But perhaps it is equally insupportable to like a candidate for a name — not just the sound of it, but the associations with grandeur, success, and toughness that are not firmly rooted in fact. In case a name has the power to break a spell, let's join John Oliver in making Donald Drumpf again.