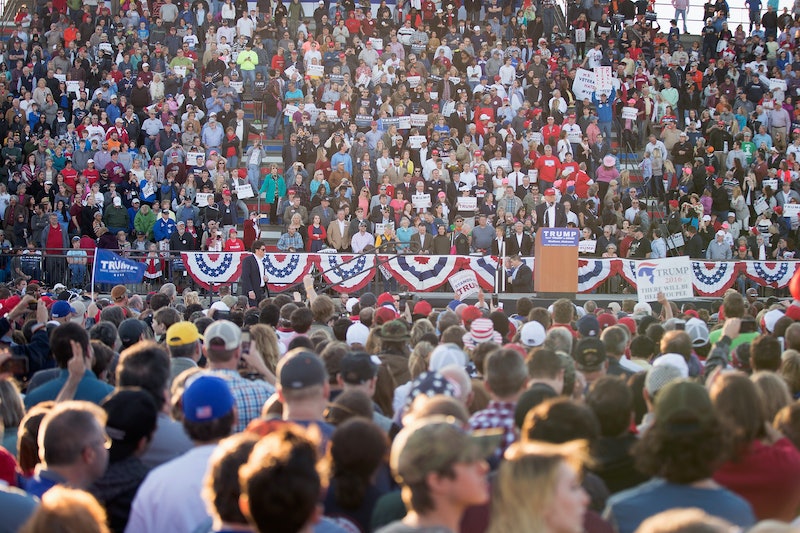 A photographer was slammed to the ground in a chokehold by Secret Service at a Donald Trump rally in Radford, Virginia, on Monday. The photographer, who was identified as Time Magazine's Chris Morris, scuffled with the U.S. Secret Service agent after he attempted to photograph security ushering out student Black Lives Matter protesters who had been heckling the Republican frontrunner throughout his speech.

Morris told CNN's Jim Acosta he was confronted and then physically attacked by a Secret Service agent after he stepped slightly out of the media pen, an area roped off for members of the press. "I stepped 18 inches out of the pen and he grabbed me by the neck and started choking me and then he slammed me to the ground," Morris said.

Initially, it was unclear whether the security agent in question was a member of Trump's private security team or the Secret Service detail assigned to him for the duration of his presidential campaign. Trump's campaign released a statement shortly after the rally, however, clarifying the security team member who slammed Morris to the ground was in fact a Secret Service agent.

In a statement of their own, the Secret Service confirmed the agent was under their employment and said their "local field office is working with their law enforcement partners to determine the exact circumstances that led up to this incident," CBS News' Sopan Deb reported.

Video footage of the incident taken by Independent Journal's Congressional Reporter Joe Perticone shows Morris being taken out of the rally after reaching out to place his hand around the throat of the agent who choked him in an attempt to show intervening security and nearby journalists what had happened.

Perticone also tweeted footage take just prior to the incident that shows Morris swearing at the security agent right before he was physically slammed to the ground.

As Morris is escorted out of the Radford arena by a police officer he told Annie Andersen of WSET that he had been arrested after touching the Secret Service agent while demonstrating what had happened for Trump's press official. "I never touched him. At the very end, I tried to show Haley, the press lead, what he did to me. And I said, 'he choked me.' So, I put my hand on him and that's when I was arrested," Morris said.

Time Magazine later clarified Morris had been briefly detained by local law enforcement but was not placed under arrest. "We are relieved that Chris is feeling OK, and we expect him to be back at work soon," a spokesperson for Time said.

Morris told CNN he was not planning to press charges against the Secret Service agent.