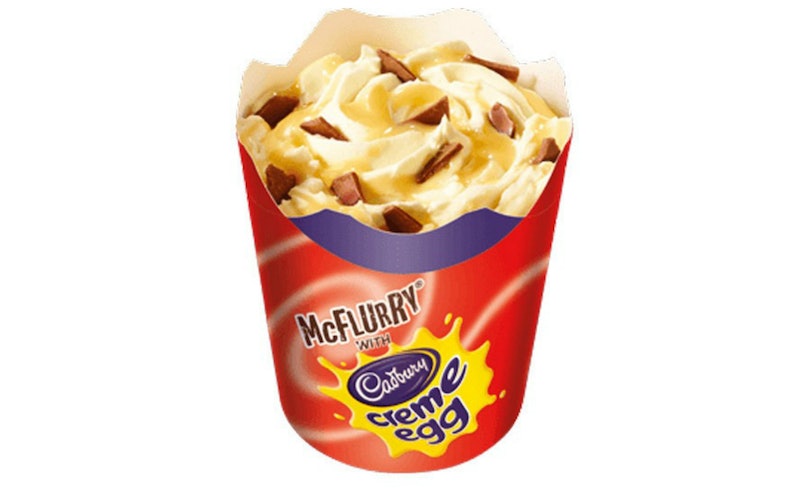 McDonald's is celebrating Easter in the best way possible — by creating a new sweet menu item, of course! McDonald's has created a new Cadbury Creme Egg McFlurry, which is the combination of a McFlurry with one of the world's most beloved Easter treats (the Cadbury Creme Egg, of course). But unfortunately, there's some bad news for most of us: The Creme Egg McFlurry will only be offered at McDonald's locations in Australia. So, if you're in the United States or anywhere else in the world, you won't be able to try one of these sweet creations unless you make a trip to the land down under.

The Cadbury Creme Egg is a very popular treat in the UK, Canada, New Zealand, and, of course, Australia. Emerging every year around Easter, these treats consist of chocolate filled with fondant that is formed into the shape of an egg. In the United States, however, Cadbury Creme Eggs are actually made by Hershey's, so think of the taste as resembling a Hershey's Kiss, just in the shape of egg. In terms of how this is incorporated into this new McFlurry, McDonald's describes the treat as being "a delicious mouthful of chocolate pieces and Creme Egg topping, blended into a creamy soft serve."

If you're an Aussie who is dying to try one of the new Creme Egg McFlurry, you can pick one up at your local McDonald's until April 5 or until supplies last (whichever comes first). However, if you're not a native of Australia and are sad about not being able to try this new epic Easter-themed ice cream, there are many other treats that have been created in the states to get you into the Easter spirit. Here are four you can indulge in without having to book a flight to Australia.

There's also going to be a new flavor of Hershey's Kisses being released for Easter this year: Carrot cake! We previously reported on the release of this new offering from Hershey, which was first spotted by someone at The Impulsive Buy on the shelves of Walmart. It seems that Carrot Cake Hershey's Kisses will be sold exclusively at Walmart, so you know where to go if you want to munch on a carrot cake-inspired treat.

Dove chocolate is always a classic at my family's Easter celebration, as my grandparents have been giving me Dove chocolate bunnies for as long as I can remember. Maybe they'll change it up this year, though, as Dove has created a smaller version of their original sold chocolate bunny. The DOVE Chocolate Bunnies and Chicks are made with a milk chocolate shell and creamy inner center. According to Mars, Dove is a top 10 brand seller at Easter, so this may just become the next big thing in Easter candy.

M&M's are also going to be enjoying a new offering this season: M&M's Speckled Malt Mini Chocolate Eggs are a part of the new Easter lineup for 2016. This item was also spotted by someone over at The Impulsive Buy a few weeks ago at Walmart, so you know where to head to find these sweet treats!

More like this
Dunkin’s Valentine’s Day Lineup Includes A Drink That Tastes Like Dessert
By Alexis Morillo
12 Aphrodisiac Desserts To Spice Up Your Valentine’s Day
By Kaitlyn Wylde
15 Black-Owned Liquor & Wine Brands To Add To Your Bar Cart
By Alexis Morillo
16 Trader Joe's Appetizers That Are Total Party-Pleasers
By Kaitlyn Wylde
Get Even More From Bustle — Sign Up For The Newsletter
From hair trends to relationship advice, our daily newsletter has everything you need to sound like a person who’s on TikTok, even if you aren’t.