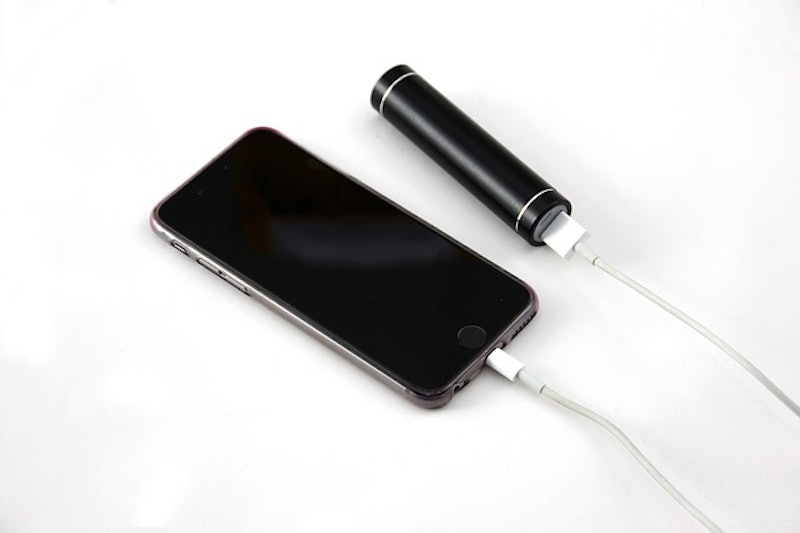 The Apple versus Android debate has burned fiercely ever since smartphones became a part of our daily lives, with people seemingly able to proclaim their allegiance for one side or the other. Now, though, they may not have to: The Mcable universal charging cable is compatible with both iPhones and Android devices. Power for all! Well, battery power, at least. And seriously, it's about time; it's apparently the first charging cable to work for both kinds of devices.

This new charger was launched on Kickstarter on Feb. 29, but has already received over 10 times their original funding goal of just over $3,500; 1,949 backers have pledged $44,861 so far, and the numbers keep going up. It's safe to say that the LMcable is definitely a Kickstarter success story — and clearly something we've all been wanting.

If you're wondering how exactly this new universal charger works, the LMcable's creators, who are based in Australia, describe the device as "the world’s first cable containing a 2-in-1 connector that can work on both micro USB and lightning devices." On one side of the device is a MicroUSB port, which is compatible with Android devices, and on the other side is a Lightning cable, which is what Apple products use to power up. Want proof? This video clip shows how it works for both types of devices.

The LMcable features tin-plated copper wires, environmentally friendly Halogen-free TPE material, a cable that is stitched to prevent tangling, and a brass buckle to keep your charger neatly in place when it's inserted into your device. It also comes in four colors,including fun names like Moonlight Black and Cowboy Blue. Additionally, you can choose between silver and gold plating options for the head.

The Kickstarter campaign has six funding categories, with backing amounts ranging from about $9 USD to over $1,000 USD. The $9 and $14 options, which included one LMcable, are completely sold out, with the minimum price tag being about $15 USD at the time of this writing.

It's worth noting, of course, that the device detailed on the Kickstarter page and featured in the video is a prototype. Although the LMcable creators have built "stable samples" of the product, they have not yet manufactured the actual cables that they will be distributing. Speaking of manufacturing, with the high demand of LMcable, they are projecting a longer wait time than originally projected to fulfill all of their orders on Kickstarter, and have a hunch that there could be some delays in delivery. So, we can't yet be sure that LMcable is going to become available to all of us, but there haven't been any glitches reported so far, which shows promise.

If you don't want to invest into LMcable's Kickstarter campaign but would still like a universal charging cable, there are already some conversion charging devices and multi-head cables out there, including the 4-In-1 Cable, 10-in-1 Multi-Function Universal USB Cable Cord Charger, and the Satzuma USB Mobile Phone Charger. Just be sure to proceed with caution when using one of these universal chargers though; they may not work as well for a device they're not specifically manufactured for.

More like this
24 Funny Valentine’s Day Captions To Use No Matter Your Relationship Status
By Jessica Booth
11 Super Bowl Instagram Captions To Use On Game Day — Even If You Don’t Like Sports
By Alexis Morillo
Flip Phones Are Gen Z's Favorite New Nightlife Accessory
By Maria Santa Poggi
Everything You Need To Know About The Samsung Galaxy S23 Ultra’s New Camera
By Alexis Morillo
Get Even More From Bustle — Sign Up For The Newsletter
From hair trends to relationship advice, our daily newsletter has everything you need to sound like a person who’s on TikTok, even if you aren’t.