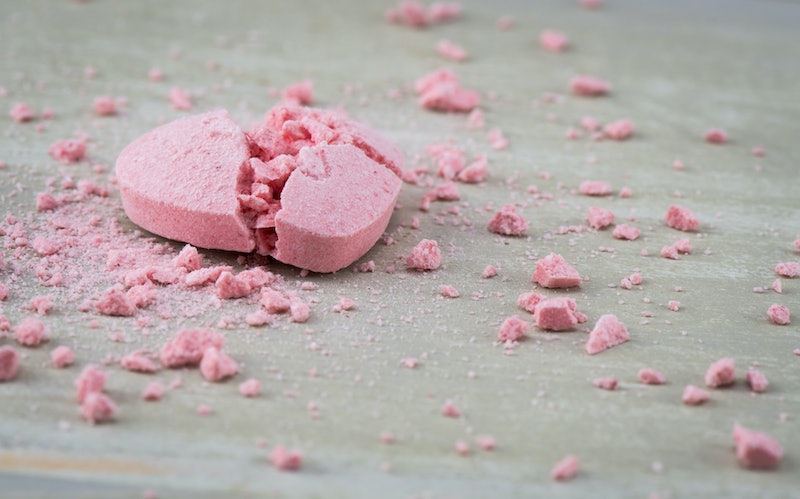 I knew it was going to happen sooner or later. It had to. The problem with New York City is that it’s far smaller than outsiders might assume. Once you’ve been here long enough, you realize that running into someone from your past, whether or not you'd like to, is a very real possibility.

Part of me knew I’d run into The Man Who Broke My Heart at Glasslands in Brooklyn. I was there with my friend Natalie to see the Rural Alberta Advantage, a band I had introduced him to and we had seen together every time they came to town. Although they were playing in Manhattan, less than three blocks from my apartment, Natalie opted to get tickets to the Brooklyn show. As Manhattanites, we don’t go to Brooklyn enough, especially this time of year. It’s the bridges, you see, that tend to keep people in their respective boroughs when the weather is cold and messy.

We actually had a plan in place to ensure that I wouldn’t see him even if he was there. It was the same plan we had when we went to see The Raveonettes the year before — Get there just as the band is about to take the stage and stay at the back. He’s one of those who need to be near the front. It was a good plan, and one that we stuck to by lingering around the East Village just long enough. Then we headed to Brooklyn.

Although I was a bit nervous to see him, my nerves were less pronounced than they'd been in the past. What this really means is that I wasn’t on the sidewalk throwing up my heart and guts, emotionally and physically purging myself as a way to prepare to face my past with dignity. Dignity and vomit on my breath.

I felt relatively numb as we walked into Glasslands. I attributed this to the fact that we were in the midst of Polar Vortex round two, and the single digit temperatures had stripped me of any feeling. Because of the cold, my glasses fogged up the second we walked into the warm venue. I struggled to wipe them clean while Natalie handed our tickets to the doorman. Before I could put my glasses back on, he appeared.

I said hello, because what else does one do? I hugged him, because, well, this person was such an important something to me at one point. Natalie had never met him, so I introduced them, an interaction that immediately became awkward when she realized who he was and he re-realized that anyone who even remotely cares about me thinks of him as the devil’s spawn.

After Natalie walked away, we exchanged a few pleasantries. I commented on the length of his hair. He told me had a dog now. That’s all that I remember before the bouncer told me I was blocking door traffic, so he went his way and I went mine. That was it. I was fine.

Actually, I was more than fine.

Natalie said we could leave if I wanted to, but I wasn’t about to walk out on this band that I loved because of him. I had lived in utter fear of our paths crossing for so long. I had willingly missed out on so many things because my heart couldn’t bear to see him. But that night I was there, I was fine, and I wasn’t about to leave on account of him.

Over the next couple days, I realized that running into him was the best possible thing that could have happened to me, and that our brief encounter taught me many things about myself.

1. I’M CAPABLE OF LETTING THE PAST GO

I seriously never thought it was possible to evolve past him. I remember just a year ago, the very thought of never having him in my life was so unbearable that I won’t even share the thoughts that went through my head. For a long time I couldn’t even imagine what it would be like to have him permanently subtracted from my existence. But yet as I stood there, without the need to vomit all over the place, I understood that I could finally release the past I had so desperately clung to.

2. I CAN STILL SURPRISE MYSELF

If I could have given myself a high-five right then and there without seeming like a total self-involved lunatic, I would have. But, of course, I still wanted to remain moderately cool in his presence. I wasn’t just surprised by how well I held it together — I was absolutely SHOCKED by it; like a deer in headlights kind of stunned and baffled. I didn't even recognize myself, and I immediately texted everyone I knew to tell them that I really had come out the other side and was OK. There were no lingering feelings for him, and the freedom from those emotions felt amazing.

3. HE’S NOT AS PRETTY AS I THOUGHT

I really hate to admit it, but The Man Who Broke My Heart was SO. DAMN. PRETTY. It wasn’t even fair how adorable he was. But now, and maybe it’s because my heart is no longer tied up in him, he’s really not that special and doesn’t look like Han Solo after all. It's a petty observation, but there was some relief with it.

4. MY RELATIONSHIP IS BETTER FOR IT

For a long time, I felt that I didn’t love Olivier (my now husband) as much as I could. I loved him with everything I had, but due to my past, there was still a part of me that was so broken that I felt unworthy of his love. It was after the brief interaction that night at Glasslands that the still-broken parts of me managed to finally repair themselves. Afterwards, I felt that I could finally love Olivier with my entire being. I could literally feel myself becoming a gooey love-obsessed fool — the fool I had forgotten existed.

I had always been a strong and independent woman before I met The Man Who Broke My Heart. But that strength and that independence were sucked dry during the years he was in my life. I was a shadow of the person I used to be. It really pained those closest to me to see such an emotionally frail woman, a woman they didn't recognize. I’m no longer that fragile person. I’m finally back to the snarky, sarcastic, little shit I was before I met him. Not just that, but I’m stronger and more aware. So, basically, I’m me, but a me that’s even better.