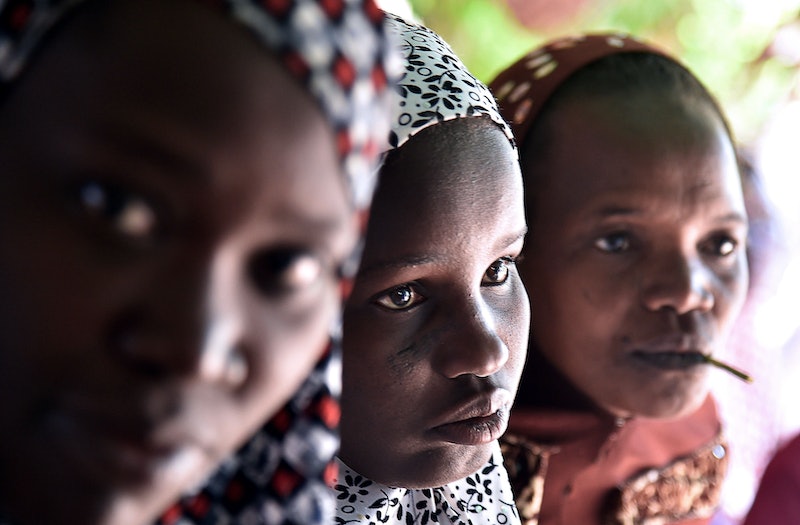 Growing up as a woman is probably a difficult feat in any country, but there are some nations where being raised as a girl is harder than others. A new report from ONE examined the best and worst countries to grow up as a woman, which was released on March 7 in time for International Women's Day on March 8. 2016 marks the second year that ONE has released its The Poverty Is Sexist report on the connection between income disparity and gender. They found in their original research that gender inequality and impoverishment often work hand-in-hand, although there is not nearly enough policy being developed around this intersection; so, they are hoping that creating another report on this topic this year will help to spark change in the legislature.

In order to determine the rankings of the best and worst countries in which to be raised a girl, ONE ranked 166 countries according to seven measures of index, including the number of years that girls attend school, the likelihood of a woman dying during childbirth, and the percentage of women who have bank accounts. Obviously, no measure is perfect, but they saw these factors as being "reasonable guides" to the quality of life possible for women and girls in any particular country.

Let's take a look at the three worst and three best countries to grow up as a woman in, according to the findings of the report. To see the full results, make sure to head over to ONE to read the full Poverty Is Sexist 2016 report.

The Worst Countries To Grow Up In As A Woman:

Niger is officially the worst country to grow up in as a woman, according to the Poverty Is Sexist 2016 report. Just a glance at a headline related to women in Niger sheds light on why they received a score of .064 out of one on the index: 70 percent of women in the country said it was "normal" for men to beat, humiliate, and rape them. Gender-based violence advisor with Oxfam Lisette Quesnel commented on this, saying that these behaviors are sadly normal for women in Niger. “Women here have been indoctrinated by their families, by religious officials, by society that this is a normal phenomenon,” she told IRIN News. Hopefully, this report will inspire a call for change for women in Niger.

Somalia was found to be the second worst country for women to grow up in in the report, with the country receiving a score of .106 on the scale. According the UN, women in Somalia "bear an unequal brunt of the hardships," that include poverty, patriarchy, and clan-based culture, which is a result of deeply rooted gender inequality. As a result, women face very inequitable circumstances, being subjected to female genital mutilation, a lack of representation in politics, and underemployment.

The country of Mali is the third worst place for girls to grow up, as this nation received a score of .111 on the index. Political chaos has been abundant in this country, although women made gains after a peace agreement was reached in 2015 that ended the armed conflict that Mali was experiencing. After women from Mali advocated fiercely during the peace talks, they were able to get a promise from their President that a draft law requiring a 30 percent women quota into their Parliament would be enforced. So, it seems that progress is being made, even if it's slow.

The Best Countries To Grow Up In As A Woman:

Norway is the the country that is the best in the world to be raised in as a girl, according to ONE's report. They ranked first thanks to their stellar score of .956, which is quite impressive. The UN has also reported that women in Norway enjoy the highest standard of living amongst women in the world. So, perhaps if you want to raise your daughters with the best chance of her having equality, or at least as close as is possible, pack your bags and head to Norway!

Sweden came in second place, making it the second best country in the world to be raised in as a woman. Gender equality is actually a principle that the Swedish government calls a "cornerstone" of their society. Sweden boasts a lot of legislative policy on this principle too, with just some of their policies extending to parental leave, education, political representation, equal pay, and gender-based violence.

Denmark received a score of .933 out of one, giving it a third place score in the report, which puts Scandinavian nations in all of the top slots. Denmark is known for the breadth and significance of their feminist movement, which is perhaps why gender equality has been so highly regarded there.

More like this
25 Inspiring Quotes From Black Women To Celebrate Black History Month
By Kyli Rodriguez-Cayro and JR Thorpe
24 History-Making Black Women You Probably Didn't Learn About In School
By Ayana Lage and JR Thorpe
6 Organizations Fighting Police Brutality That You Can Support Right Now
By Syeda Khaula Saad and JR Thorpe
Twitter Is Identifying With Sally Field & Jane Fonda’s Friendship In New Viral Video
By Jake Viswanath
Get Even More From Bustle — Sign Up For The Newsletter
From hair trends to relationship advice, our daily newsletter has everything you need to sound like a person who’s on TikTok, even if you aren’t.