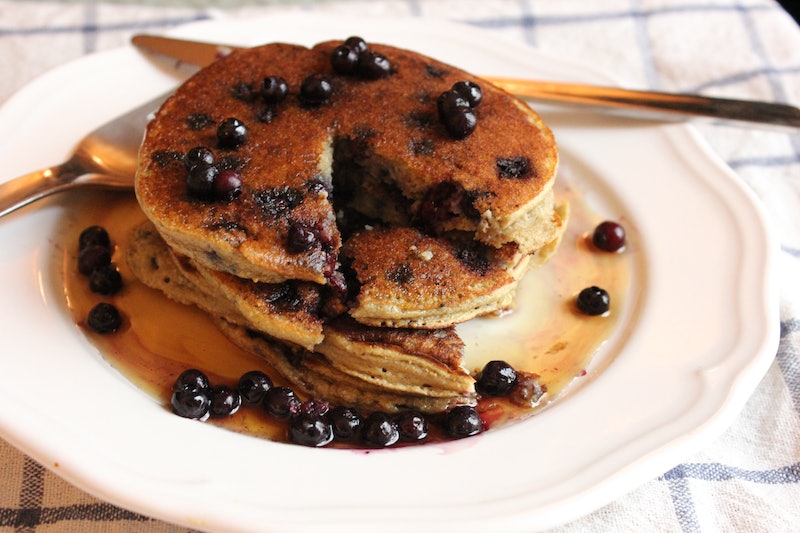 Sometimes I feel like I have a lived a hundred different lives and that I have found some impossibly clever way to tuck them all up inside of myself, revealing them only in the most deliberate of fashions. Like a wooden matryoshka doll stuffed full of smaller and less-full people, I sometimes seem to unfold.

Which brings me to this story. This story I have been trying to write down for years now. This story that I am just now accepting as a part of my life, as something that happened in it and to me. It’s the story of how cooking saved me.

I have always been an eater, and a cake batter dreamer. As a child, I poured over the pages of my mother’s taped-together Joy Of Cooking. In middle school was when I cooked my first perfect crepe — so thin and lissome, so encouraging. It was then that I was sold on the idea of being there — there in the kitchen. But I still was not quite.

In college, I bought yogurts from the grocery store and ate them for dinner. And I went through a vibrant Kraft macaroni and cheese phase, as I suppose all 20-year-olds are wont to do. The kitchen was a place I would go to feed myself, but not a place I would go to provide for myself — not in any real way, that is. But that changed.

That changed because, when I was 23 years old, I got married. This is something a lot of people don’t know about me — my friends, my co-workers, the people I live with. It’s a big secret that I’ve kept and carried around with me, pretending that it never happened at all. I aimed to delete it from myself; to change the story. But, years later, I am at last coming to terms with the fact that it did happen. It happened to me.

The first weekend of my married life was the weekend I knew everything was wrong. I knew because he told me so. He told me and he showed me in every single way that was available to him. Because if there’s one concise way in which I could describe to you the person I married, it would be this: He had a temper. And from the very beginning, I had this overwhelming feeling — this certainty – that what I was was not a wife, not a spouse, not a partner. I was a legally married person. And I was in trouble.

Because he would not let me be his wife, I chose instead to perform the role of wife. I saw couples around me — real couples — getting engaged, hedging vows, sailing off into the domestic sunset together, and I knew I would never access that with him. And I was ashamed. I was ashamed of what he did to us, and I was ashamed that I had allowed it to happen at all.

So I was a wife in the best way that I knew how to be one. I was a June Cleaver wife — a wife in the most concise sense of the word. And I painted myself in broad brushstrokes. I smiled. I talked of our future. And I fed him.

It started with a chicken salad sandwich, which swelled into beef bourguignons and chicken piccatas. I baked muffins, toasted granolas, and mulled cheap bottles of red wine on the stove top. I fed him my disappointment, my disavowal, my frustration. I killed him with kindness because it was the only way to keep those things from killing me. Because there is something that happens to you when you trust a person and they puncture that trust. And that something happened. It was profound; it was clean cut; it felt like drowning. And for a very long time I could not breathe.

My project in domestic restoration, which had started with that single batch of homemade chicken salad, quickly grew. And its mission shifted. I cooked not to please him — though the food did do that. No, I cooked to gain ground, claim territory. I cooked to manifest destiny. I cooked because I didn’t have a home, and I needed one.

It was a game that he didn’t know we were playing. I was rolling die and strategically helming my game piece around the unfolded board. I was purchasing property. A pot of rice bought me Pennsylvania Avenue. For three boiled eggs, Park Place was mine. The kitchen was a frontier, and I was Little House on the Prairie. I was Oregon Trail. I forded the river; I caulked the wagon to float. I survived. I got by. And he had no idea.

I was not a shrinking woman. I was growing, increasing — fulsome. I stirred the pot. If I could make a perfect risotto, I could get through this. I whisked batters. I seared meats. I tempered eggs. I built my own home inside that kitchen. I saved my life.

I was not a doting wife because I was not a wife. I was Joan of Arc — pious, but dressed for battle. I was hidden away, but a person still. And from inside the small, dark, black and blue space where he had tucked me, I scribbled notes to the outside world. They smelled like garlic roasting slowly in the oven. They tasted like honey. I was quiet, but I was legible again.

In April, I baked my own bread — it was rich and real and sustaining. In May, I churned my first ice cream — a cardamom-ginger custard, so rich, so velvet and foment, that I hid it away in the back of the freezer all for myself. In June, as the season’s strawberries ripened, I too ripened. And I told him to leave my home — the one that we had begun together, the one that had not yet seen all the seasons, had not yet known an August tomato. The one that, with caramelized onions, banana puddings, and braised Brussels sprouts, I had colonized — had made mine. I took back what he thought he had taken by force. And I won; he retreated.

And soon he was gone and I was left alone — in my kitchen, in my home. I drew a long-handled spoon from the drawer and carefully extracted the ice cream from the back of the freezer. And I ate.

This essay was originally published on Leaf Parade .