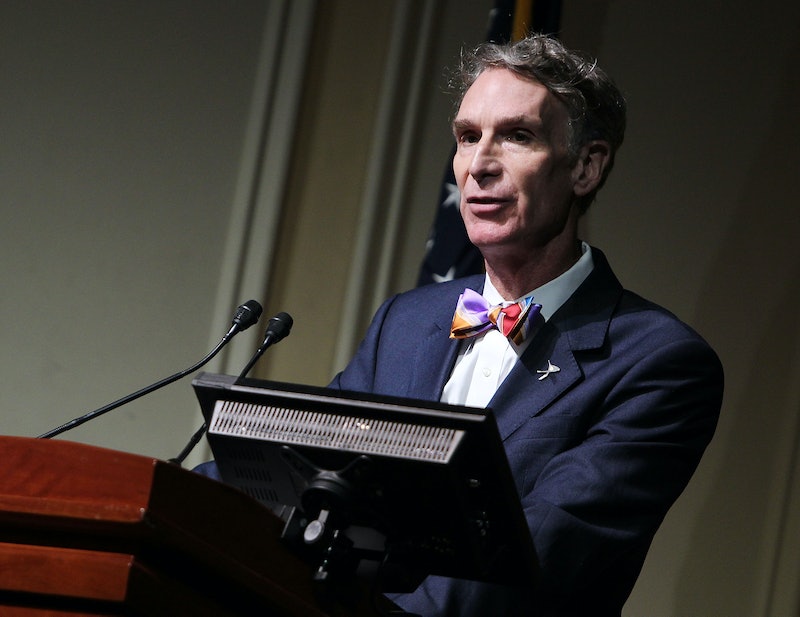 In case you missed it, Bill Nye "The Science Guy" had a creationism debate last night with Ken Ham, the head of the Creation Museum. It was broadcast live on YouTube and watched by over 500,000 people. Presumably you remember Nye as a well-known science educator and beloved fixture of your childhood, but if you're unfamiliar with Ham, he's a young-Earth theory advocate who interprets the first chapters of Genesis literally and has posited his own model of the natural history of the Earth. In other words, this was a debate over the very foundations of life, the universe, and everything. So not important stuff or anything.

Listening to the debate and following along with the hashtag #creationdebate, I couldn't help but feel, however, that this wasn't really a debate at all. Though the ideas that both men brought up were fascinating in their own right, they were both, in a very real sense, talking past each other. More than anything else, they were each trying to reach their audience, presumably considering each other to be lost causes. And while it's probably true that neither would have changed their mind based on anything the other said, the debate left me feeling unsatisfied for the simple reason that it could have been an opportunity to truly engage with ideas about the intersection. But Nye isn't a theologian and Ham isn't a scientist in any real sense of the word, and so the opportunity was lost.

And losing that opportunity is a shame, because the intersections of science and religion, both the comfortable and uncomfortable ones, are crucial for our society. We live in a deeply religious country, and a deeply scientific one. And despite Bill Nye's plea to not abandon science education and Ken Ham's seeming concern at the loss of fundamentalist faith, neither of those things are going to change any time soon.

As their "debate" progressed, I was struck by two thoughts. First, these two people have completely unreconcilable world views. And second, they don't have to. There are, as Nye himself pointed out, hundreds of millions of people who reconcile evolution and Christianity. Even the Catholic Church has accepted evolution as truth. Of the 2 billion Christians in the world, only a handful believe the Earth is only 6,000 years old. And most don't have a problem with it, because having a faith-based world view doesn't make someone unintelligent.

But the issue goes deeper than reconciling Genesis with Darwin. Throughout the debate, Ham used the concepts of Christianity and faith as though the two were interchangeable, and he seemed to view science and religion as a zero-sum game, two philosophies that must compete and cannot coexist in harmony. This idea is not only insulting to the people who have intellectually reconciled the two, but is also an idea that depends on a model of religion as inherently proselytizing religion, and proselytizing at the exclusion of all other ideologies. This is not only not true of science, but not true of most religions on Earth.

As the U.S. grows more diverse, as the religious landscape grows more varied, this zero-sum view of the universe is rapidly becoming outdated. Most reasonable people accept that for a diverse society to exist, competing ideas can and must coexist with one another. Both Ham and Nye reject each other's worldview out of hand, but Nye at least doesn't mind people believing things he doesn't believe, just so long as they aren't actively denying objective fact. But in last night's debate, Nye could only speak to objective fact. Science might well become a needed source of common ground in our society, something all people can agree on despite our differences, but it's not going to get there unless we allow it approach people in terms they recognize.

Ultimately this debate wasn't a debate. It wasn't an exchange of ideas. It was an opportunity for two men to present their world views for an audience to choose between. (And it seems Nye won quite handily). But whether or not it's televised (or YouTube-ised), our country does need to have a real discussion of these ideas, one that doesn't view science and religion as a competition but as two important parts of our national consciousness that occasionally need to be reconciled, whether that means we re-evaluate our interpretation of religious texts or weigh the moral implications of scientific capabilities. The two will always inform our thinking, and so cannot exist apart from each other. Which means we as a country have some work to do in grappling with them both, and we probably always will. But hey, maybe someday...