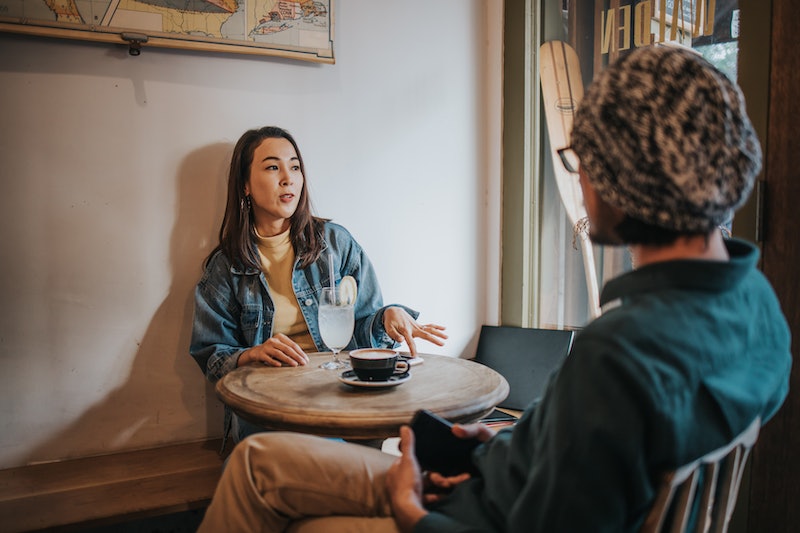 When we're trying to make a connection with someone new, catch up with old friends, or simply be polite to a stranger, we make small talk. But although this habit of talking about random pleasantries may seem like a completely human activity, it turns out that humans aren't the only species of animals who have to endure the awkwardness of making small talk: A new study published in the journal Animal Behavior found that lemurs engage in this type of communication, too. This finding may not be entirely surprising when you consider the animal kingdom, though, since lemurs are our primate cousins and thus, are pretty closely related to us, genetically speaking. Still, it does shed some interesting light on the function of small talk.

In a study of lemur vocal networks, researchers from Princeton University examined the function of vocal exchanges in these animals, particularly with regards to how they might work within social and group functioning. They found that there were indeed social patterns and meanings behind specific kinds of calls and that the lemurs who would respond were those with whom that lemur was familiar. Interestingly, the vocalizations seem to act as a "bonding function" amongst the groups — that is, they build interpersonal relationships. Lemurs frequently bond through grooming; the researchers postulate that these calls act as a form of social grooming, allowing the lemurs to connect even when they aren't physically touching. This "grooming at-a-distance" helps the animals to keep their strong bonds, even when they're a distance apart.

Here's where it starts to get really interesting: These calls seem to have the same purpose among lemurs as small talk does for humans — social bonding. In lemurs, these calls weren't found to be used for passing along knowledge, much as small talk doesn't give us much useful information either. They're functional from a purely social standpoint.

The researchers suspect this technique of talking-as-bonding was passed down evolutionarily from primates to humans, with small talk gradually becoming a more efficient way to reinforce social connections without necessarily having to go through the rituals of physical grooming. Lead study author Ipek Kulahci commented on this connection in a press release on the study:“Talking is a social lubricant, not necessarily done to convey information, but to establish familiarity.... I think these vocalizations are equivalent to the chitchat that we do," he said. "People think that conversations are like exchanging mini-lectures full of information. But most of the time we have conversations and forget them when we’re done because they’re performing a purely social function.”

Now, before you get defensive about the purpose of your conversations, just because talking serves a social function doesn't mean that it's not useful. In fact, small talk is incredibly important to establishing relationships and enjoying the company of other people. A study from the University of Chicago on small talk proved this, by looking at how these interactions function on public transportation: In the experiment, one group was asked to refrain from talking to other passengers, one was asked to converse with those around them, and the third didn't receive any instructions on interaction. Although the passengers predicted their commute would be most enjoyable if they were given solitude, the study found the exact opposite to be true, with the passengers who spoke to others around them having reported the most pleasant commute. Hence, small talk enhances our experiences through connection with others.

So, the next time that you find yourself in the middle of small talk, it's worth remembering its positive benefits, rather than dreading it. After all, it's a function that was important enough to survival to have been passed down to us all the way from our ancient ancestors.