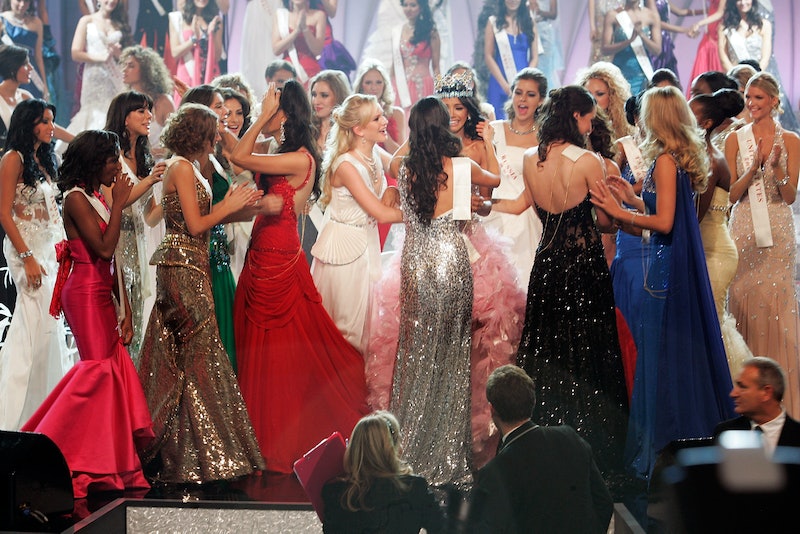 Last night, the documentary Extreme Beauty Queens: Secrets of South America aired on BBC Three in Britain, revealing the truly crazy lengths Miss Venezuela contestants will go to for the crown. One contestant, Meyer (short for Wilmayerlin), stood out amongst all the other hopefuls. After previously failing the pageant's preliminary rounds, her family saved up $10,000 for her to get a nose job, breast augmentation, and an actual patch of plastic mesh sewn on her tongue. Because old-fashioned dieting apparently isn't enough, this would-be beauty queen turned to tongue mesh, which makes eating solid foods painful and consequently helped her lose weight quickly for the 2013 finals.

Contestants follow the guidance of Miss Venezuela president Osmel Sousa, who might as well be the poster child for tough love. After one girl faints, apparently because of the "extreme diet" she was on, Sousa exclaims, "If you faint like a beauty queen, get up like one." He also said, "What I love is seeing positive transformations. Nature hasn't been kind to some women."

Sousa also has some pretty juicy opinions on feminists who protest the pageant:

Those organisations were created by ugly betties with no hope of a fix! They're all horrendous! They are taking things out of context. We're not training astronauts here - we launch women's showbiz careers.

Meyer entered the competition hoping to find a way out of Caracas' Santa Cruz barrio for her family. "It would guarantee me and my family a future," she said in the documentary. "It would allow us to leave the barrio."

Meyer, whose measurements (bust: 35", waist: 24", hips: 35") supposedly represent "mathematical perfection," goes on to win first runner-up, which apparently is a pretty big deal. And she owes it all to a plastic tongue mesh — as if we needed more proof that the world of beauty pageants is as insane as can be.

More like this
Black Women's Equal Pay Day Highlights An Upsetting Problem
By Brandi Neal
Bustle Newsletter: September 21, 2022
By Stephanie Talmadge
Women Around The World Are Cutting Their Hair In Solidarity With Mahsa Amini
By Darshita Goyal
Here’s Your Daily Horoscope For September 26, 2022
By Mecca Woods
Get Even More From Bustle — Sign Up For The Newsletter