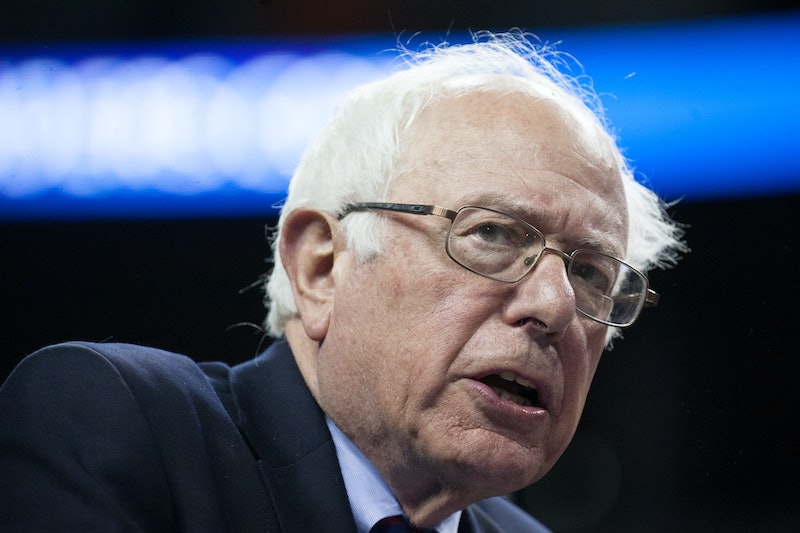 Just four months after 130 people were killed in a series of Paris terror attacks, Europe has been targeted once again. And while world leaders across the continent have responded to the terror that has hit their home Tuesday, the U.S. presidential candidates have also addressed the Brussels terror attacks. And it's no wonder — though the death toll rises after twin attacks at the Brussels airport and a metro station, the attack (which involved at least one suicide bombing) is an indication of more to come in the following years, as terrorism becomes all the more rampant.

(Update: ISIS has claimed responsibility for the Brussels attacks in an announcement via Amaq, a news service affiliated with the group.)

With the attacks occurring at 8 a.m. overseas, the response in the U.S. has been slow-moving as candidates rise for the day. Surprisingly, Donald Trump was the first presidential candidate to respond to the attacks, with a predictably succinct response that could strike some as a bit flippant. The GOP candidate, clearly referencing the problems Belgium and, more specifically, Brussels has faced in recent months fighting terror threats (recall the city's lockdown following the Paris terror attacks and subsequent arrest of alleged Paris suspect Salah Abdeslam just four days ago), tweeted the following hours after the attacks occurred:

Another GOP candidate wasn't too far behind, with a much longer response. In fact, Gov. John Kasich released a statement not only admonishing the attacks, but also calling for support between nations and people during a time that is so fraught with violence. As he said in his statement, tweeted out Tuesday morning:

I want to express my solidarity with the people of Belgium in the aftermath of the attacks that took place in Brussels. Along with every American, I am sickened by the pictures of the carnage, by the injuries and by the loss of life.

The wave of terror that has been unleashed in Europe and elsewhere around the world are attacks against our very way of life and against the democratic values upon which our political systems have been built.

We and our allies must rededicate ourselves to these values of freedom and human rights. We must utterly reject the use of deadly acts of terror.

We must also redouble our efforts with our allies to identify, root out and destroy the perpetrators of such acts of evil. We must strengthen our alliances as our way of life and the international system that has been built on our common values since the end of the Second World War comes under challenge from these and other actors of evil.

My thoughts and prayers are with the victims of the attacks and with the people of Belgium.

As for the rest of the GOP, Sen. Ted Cruz released a statement on Facebook about the attacks, which not only admonished the Islamic state, but also fit in a slight plug for his presidency.

He also followed the statement with several tweets about Islam:

On the Democratic side, Hillary Clinton also reached out to Brussels in a statement released to reporters.

Terrorists have once again struck at the heart of Europe , but their campaign of hate and fear will not succeed. The people of Brussels, of Europe, and of the world will not be intimidated by these vicious killer. Today Americans stand in solidarity with out European allies. Our thoughts and prayers are with the families of those killed and wounded, and all the people of Belgium. These terrorists seek to undermine the democratic values that are the foundation of our alliance and our way of life, but they will never succeed. Today's attacks will only strengthen our resolve to stand together as allies and defeat terrorism and radical jihadism around the world.

Like Cruz, Clinton also followed her statement with a series of tweets.

And, hours after the rest of the candidate pool released their statements, Sen. Bernie Sanders at least weighed in as well about the dozens lost in the Brussels terror attacks.

No doubt, the candidates will continue to comment as the presidential race continues.

More like this
Watch Jacinda Arden’s Devastatingly Honest Resignation Speech
By Sam Ramsden
6 Organizations Fighting Police Brutality That You Can Support Right Now
By Syeda Khaula Saad and JR Thorpe
This Is When Netflix Is Going To Start Charging You For Sharing Passwords
By Darshita Goyal
What The UK Blocking Scotland’s Gender Recognition Bill Means
By Sam Ramsden
Get Even More From Bustle — Sign Up For The Newsletter
From hair trends to relationship advice, our daily newsletter has everything you need to sound like a person who’s on TikTok, even if you aren’t.