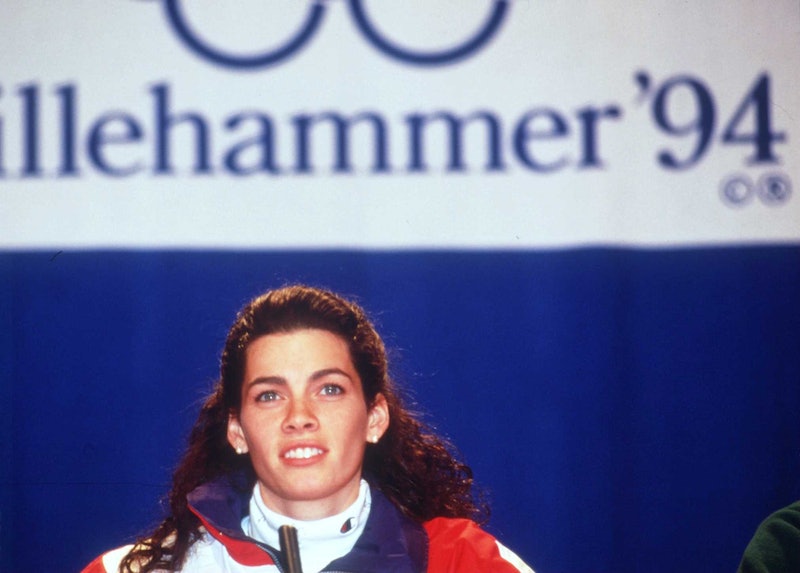 Having not watched Olympic figure skating since the early 1990s, Nancy Kerrigan and Kristi Yamaguchi are, like, It for me. They are U.S. women's figure skating in my mind. And because most of what I remember about Kerrigan revolves around her getting whacked in the knee with a baton, I also remember her mainly as a sympathetic figure, an "America's sweetheart" type. But apparently girl had an attitude, and it is kind of fun. The sexist treatment she got from 1990s media, though? No so fun.

Via PolicyMic, here's a 1994 TV clip about Kerrigan's "icy" attitude. Though she looks younger, Kerrigan was 25 years old at the time. And from the sound of it, she really didn't want to be riding on a float with Mickey Mouse in a Disney parade, waving and smiling like a pageant princess. "This is the corniest thing I've ever done," she says, seemingly to her mouse companion. Apparently it was a really big controversy at the time.

Maybe Kerrigan was just having a bad day. Maybe she'd had it with being forced to do events that had nothing to do with her sport. Or maybe — as she later said in a statement — she wasn't actually complaining about the parade at all. But what followed shows how much we dislike when athletes — particularly young, pretty female ones — deviate from the grateful and graceful script. A 1994 Washington Post article straight up asks: "Is Nancy a bitch?" In the TV news clip below, the newscaster effectively tells her to smile, young lady.

You know how annoying it is when a stranger on the street tells you to smile? Imagine if the whole world constantly felt entitled to coax smiles out of you...

Kerrigan later said her attitude had nothing to do with the event, however — she was simply mad at her mom for forcing her to wear her Olympic medal. ''I was afraid that it might look like bragging, and I'm not comfortable with that," she said. Unedited footage shows that Kerrigan is, indeed, talking to her mother. But of course it made a better story when edited to make Kerrigan look "frosty." After that, Kerrigan's reputation as an ice queen was pretty much set.

More like this
14 Scary Campfire Stories To Tell Your Friends
By Charlotte Ahlin and Kaitlyn Wylde
How To Politely Reject Someone Who Keeps Asking You Out
By Laken Howard and Lexi Inks
The Meaning Of Angel Number 777, According To An Astrologer
By Brittany Beringer
Here’s Your Daily Horoscope For October 6, 2022
By Mecca Woods
Get Even More From Bustle — Sign Up For The Newsletter