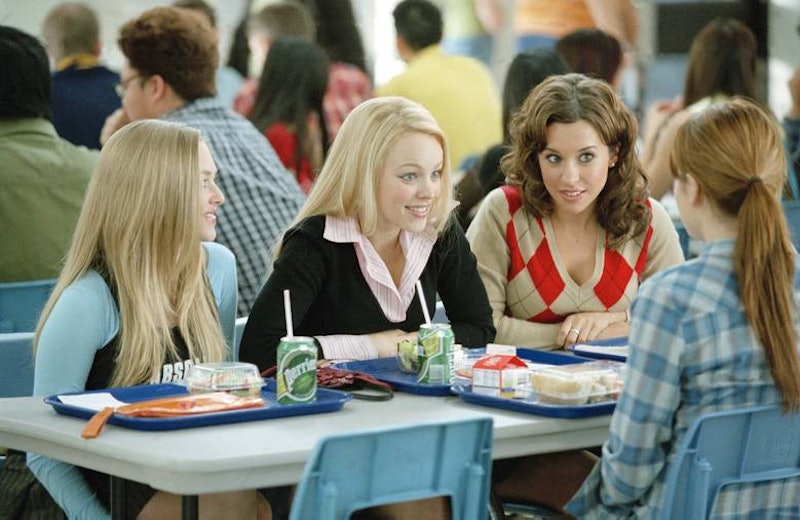 1. Your friend posts a cutesy picture of herself with a new guy on Facebook, and you have no idea who he is. Julie Melillo, a life and dating coach, tells Bustle, " If you notice something new on a friend's Facebook page, whether that's a new job, a new guy, or a new hobby, it's time to schedule time to catch up with that friend and share details about both of your lives."

2. You’ve stopped having sober hangouts. All catch-up dates are at happy hour or some boozy venue because you’re worried that a sober hangout could be too awkward, considering how long it’s been. In some cases, friends who drink together stay together. However, there should be a good balance between tipsy and non-tipsy hangouts.

3. You always end up tacking other friends (or your boyfriend) on to one-on-one plans you’ve made with her. "It's important to be aware of what kinds of plans you're making and why you're hanging out," says life coach Julie Holmes. "If you're catching up with a girlfriend who just went through a bad break up, you should consider giving her the respect of not bringing other people around so she an feel comfortable expressing herself to you."

4. You look over your text exchanges from the past month and notice you’re the one who’s flaked or canceled in the majority of cases. And when you can't make plans, you're never the one to reschedule. No one person should be responsible for all of the plan-making. "Don't make plans if you're not sure you can keep them," Holmes tells Bustle. "Saying you're not sure yet is much better than backing out at the last minute. It's the small things that build up trust and good-quality, long-lasting relationships."

5. You make up fake excuses for why you can't meet up, when really it’s just because a more appealing offer came along. "Making up an excuse is a problem because even a small lie can break the trust in a friendship," says Melillo.

6. You’re jealous, not happy, when your friend gets a new boyfriend, loses weight, or rocks the bob haircut you tried a few years ago. Try to familiarize yourself with your feelings of jealousy. The sooner you can identify them, the sooner you can stop yourself from taking them out on her (or letting them consume you.)

7. You forgot her birthday, and only realize you forgot when she posts a “Thanks for all the birthday wishes” status on Facebook. Melillo acknowledges that "life changes can happen quickly, and there isn't always time to update all friends." But missing a birthday? Come on.

8. You dominate every conversation, typically with your drama. Life coach and O Magazine columnist Martha Beck stresses the importance of balance in friendship. "Many friends have unspoken but ironclad rules about which person will do what share of the emotional and logistical work," she writes. "Unhappy friendships are all different, but those inflexible relationships almost universally signal the psychological dynamics of narcissists and their echoes."

9. You send Snapchats while you're hanging out, and often, it seems like you're not entirely present or invested in the relationship. Ambivalent friendships — the ones that feel both good and terrible — are toxic friendships. In fact, a study conducted by ­Julianne Holt-Lunstad of Brigham Young University found that if you're an ambivalent friend, you're actually negatively affecting your friend's health. While we don't expect anything from people we loathe, we expect things from friends, and those who swing between being supportive and uncaring crush our expectations in a way that is actually physically harmful.

10. You can’t remember the last time you told her you loved her, or how much you appreciate your friendship. A simple gesture of appreciation, whether it's an email saying "thank you" or a text saying "i love you" (adorned with several heart emojis, of course), takes less than a minute and will let your friend know you still value her.

11. There’s never been a time when you haven’t owed her money. Putting your friend in a position to constantly nag you about owing her money will only make you both resent each other. She shouldn't have to remind you more than once; plus, you should never make a habit of borrowing only from one friend in particular.

12. You never apologize. And on the rare occasion you do, the apology is weak. In Psychology Today, Aaron Lazare writes, "The botched apology — the apology intended but not delivered, or delivered but not accepted — has serious social consequences. Failed apologies can strain relationships beyond repair or, worse, create life-long grudges and bitter vengeance."

13. When you make plans together, it’s always in your neighborhood... yet you still manage to always be 45 minutes late to your hangouts. Of course, a good friend will understand the occasional poorly-timed commute or work crisis, but being consistently late gives the (accurate) impression that you do not respect or value her time.

14. You can only find time to get together when you’re single. "No one wants to feel like a back-up option," Melillo says. "Friendships should be valued." And prioritized, regardless of your relationship status.

More like this
21 Signs You're Not In Love Anymore
By Sara Altschule, Kathleen Ferraro and Carolyn Steber
8 Signs Your In-Laws Might Be Toxic
By Kat Kuehl
10 Ways To Be More Empathetic To Your Partner
By Raven Ishak and Lexi Inks
The 19 Best Tweets & Memes About Bisexual Awareness Week
By Lexi Inks
Get Even More From Bustle — Sign Up For The Newsletter