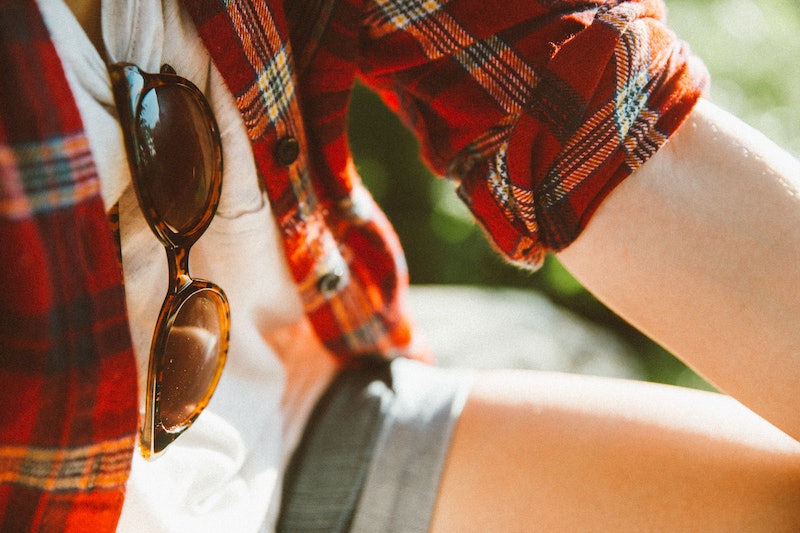 Like blisters and chafing, heat rash can be a super uncomfortable condition that can make your summer a living nightmare. And although that prickly and itchy red rash usually seems to strike once the temperatures rise, conditions like these can occur anytime of the year, if the environment is right.

“Heat rash occurs when the openings of the sweat glands become clogged and irritated," Dr. Elizabeth Tanzi, Founder & Director of Capital Laser & Skin Care, explains to me over email. “There usually are mild, moderate and severe forms of the condition, which can appear on various parts of the body covered by clothing.”

But rather than falling down the Google rabbit hole and self-diagnosing yourself with every skin care condition possible, it’s best to keep your cool and stick with the facts before making any dramatic conclusions. Heat rash usually tend to go away on it’s own, but if the condition persists after some time, it’s always wise to get it looked at by your doctor or dermatologist.

But if you're trying to sort out whether your irritation is worth that trip to the doctor's office, I've consulted some expert dermatologists to break down the signs of something not-so-serious.

1. Identify Which Type You Have

Heat rash tends to appear on parts of the body usually covered by clothing and is a red or pink rash that can occur at any time during the year. There are several different types of heat rash to keep an eye out for, though they all look rather similar.

“Miliaria crystallina is considered the mildest form, and affects the sweat glands in the top layer of skin,” says RealSelf contributor and board certified dermatologist Dr. Joel Schlessinger via email. “This type of rash is usually characterized by fluid-filled blisters that tend to break easily.”

Then there's miliaria rubra, which occurs a bit deeper in the skin. And also known as prickly heat, this kind of heat rash usually involves symptoms such as red bumps, itching, and an unbearable prickling sensation, according to dermatologist Dr. Neal Schultz.

The last and least common form of heat rash is known as miliaria profunda, which affects the deepest layer of the skin. This rash manifests as larger bumps in the skin, and can become irritated from friction caused by clothing. Dr. Schlessinger notes that this rash tends to have firm, flesh-colored lesions that look similar to goosebumps.

Any basic internet search will show you that young children and babies usually are the victims of heat rashes, but it's also important to note that adults can also develop the rash under certain conditions.

Individuals who do a lot of sitting for example (think drivers and frequent travelers) tend to deal with a lot of pressure and sweat, making them a ideal candidates for heat rashes. Similarly, those who engage in a lot of physical activity are also at risk, as Dr. Schessinger notes that tight clothing and constant perspiration encourages rashes to form more easily.

But, Dr. Neal Schultz also stresses to pay attention to your climate, as people in warmer areas tend to deal with heat rashes more often. However, it's still more than common to get heat rash in the winter, since all those layers can cause heat and friction on the skin.

Despite all the varying triggers, you've probably realized that the underlying cause of heat rashes usually remains the same. Most heat rashes are usually caused by a combination of overheated skin and friction, which in turn, can cause parts of the skin to become inflamed and irritated. In addition, factors like heavy and tight clothing, or sitting on the skin for prolonged periods of time, can also play a big part.

“Heat rash usually begins with excessive perspiration in a hot, humid environment,” states Dr. Schlessinger. “It's also common in active adults and those patients who experience a severe fever accompanying an existing medical condition may also be more at risk.”

Heat rash symptoms can vary depending on the person, but the biggest rash indicators to tend to include redness, swelling, and small bumps forming on the top of sweat ducts. More serious symptoms can include soreness and intense itching.

“In adults, heat rashes are usually found in skin folds and areas where clothing causes friction,” says Dr. Schlessinger. “In babies, heat rash typically appears on the neck, shoulders and chest, but it may also show in skin creases, underarms or the groin area.”

Without a doubt, heat rashes can look pretty serious at first glance. However, conditions like these can be treated easily, and usually go away without any intensive treatment. Dr. Schultz recommends using cool compresses, cold baths, and calamine lotions to soothe any affected areas.

Dr. Tanzi also recommends wearing cool and loose clothing, while Dr. Schlessinger adds that limiting your time outdoors will help, as sweat and perspiration will only make your condition worse. Of course, since the condition isn't serious, you'll have to decide if healing the rash is worth missing out on outdoor activities.

Finally, Dr. Schlessinger says, make sure your skin is completely dry after a bath or shower before you put on clothes. Otherwise, your cute outfit will prevent that moisture from evaporating, which can exacerbate your symptoms.

Heat rash definitely is uncomfortable, but it usually does not require medical treatment. According to Dr. Schlessinger, the rash usually disappears on it’s own in two to three days, without any additional side effects.

While cortisone can be recommended to help keep swelling down, Dr. Schlessinger advises to avoid applying too many topical treatments, as they can lead to further irritation if you go overboard.

“There is no need to apply topical treatments, as these could irritate the skin and further block sweat glands,” Dr. Schlessinger says. “It’s a good idea to see your dermatologist if the rash does not disappear within a few days.”

7. Know When It's Something Else

Heat rashes usually prove to be a mild but annoying condition that usually go away after some time. However, some cases can become severe enough to lead to larger infection. While this tends to be pretty rare, signs of greater infection include a fever, chills, and redness in the affected area. If you are experiencing warning signs like these, it's more than wise to seek out professional help, before the condition gets any worse.

“If not treated properly, the infection could worsen, leading to scarring and other health concerns.,” warns Dr. Schlessinger. “If you experience heat rash with any unusual side effects, it’s always a good idea to consult your dermatologist, to make sure it’s nothing serious.”

Yes, heat rash is annoying. But it's usually just a sign you're doing summer right, so in general there's no need to sweat it.

More like this
6 Asian Beauty Rituals That Will Soothe Your Skin, Scalp & Mind
By Jennifer Li
13 January 2023 Beauty Launches Our Editors Can't Get Enough Of
By Rachel Lapidos
John Legend's Loved01 Skin Care Line Is All About Accessibility
By Carolyn Steber
I Tried Peace Out Skincare's Acne Day Dots Under Makeup & I'm Impressed
By Olivia Rose Rushing
Get Even More From Bustle — Sign Up For The Newsletter
From hair trends to relationship advice, our daily newsletter has everything you need to sound like a person who’s on TikTok, even if you aren’t.