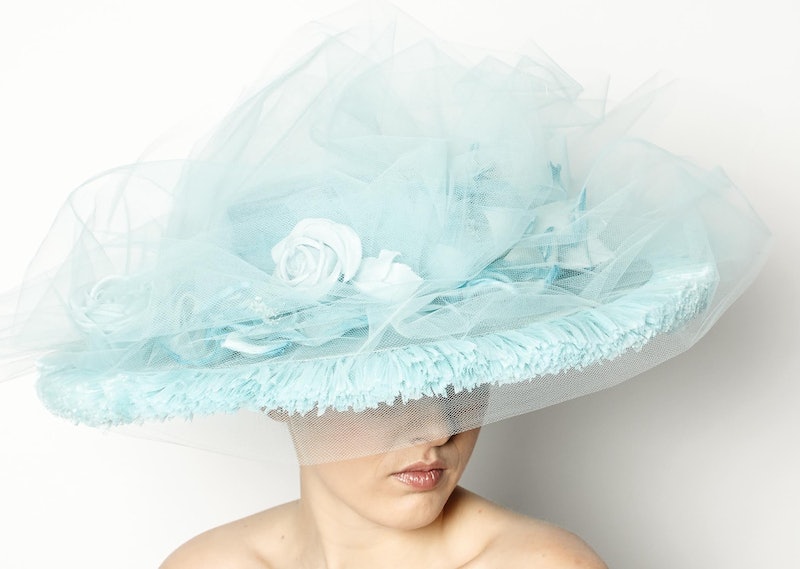 If you're a fan of racing, you'd probably make the argument that the Kentucky Derby is the best two minutes in sports. But if you're like me and you would trade in all things sports related for a Look with a Capital L, you know that the race is really all about the hats. The most expensive hats at the Kentucky Derby are usually created months in advance, elaborately crafted by expert milliners around the country, and sold at a premium to the most elite Derby attendees. After all, it costs thousands to land a seat at The Mansion at Churchill Downs Racetrack — so it's important that your hat meet the lavish requirements of such an affair.

So what kind of expense is the enthusiastic Derby attendee looking at? Turns out, it's hard to conclusively say. Custom hats aren't just about the hat itself, but about the elaborate embellishments. Depending on what kinds of feathers, fabrics, gems, and other accoutrements one uses, the hat can go from being a pretty penny to, well, millions of pretty pennies. And despite the fact that not all Derby hats are outlandish — some run on the conservative side — custom hat-making is usually a pricey affair no matter which way you cut it. Suzanne Newman of Suzanne Couture Millinery on the Upper East Side of Manhattan has been making Derby hats for long enough to know it.

"Legendary hats always bring to mind the hat Audrey Hepburn worn to Ascot in My Fair Lady," she tells me in an email interview.

"Customer preference depends on their personality and the group they are attending [the Kentucky Derby] with," Newman explains. "A hat that compliments the outfit, but is special because the event is really all about The Hat. It should not be so big that it restricts the view of anyone behind or next to them. There is a lot of revelry, so it should also be secured well on the head."

Newman makes roughly 20 to 30 custom Derby hats each year, and has been doing so for the past three decades.

That's a huge amount of orders for a very small window of time, and if that's the demand at one millinery shop in New York City, then one can only imagine what the couture millinery shops in Kentucky, Tennessee, and other Derby-obsessed parts of the country are up against. Newman herself only makes custom hats for special occasions, and her work usually ranges from about $400 to $2,000 — including the hats she designs for the Derby.

Sally Faith Steinmann founded her Massachusetts-based company, MAGGIE MAE DESIGNS, in 1998, and began making hats for Derby when she launched her website.

"Although I don't know an exact figure, over the years I have created hundreds of Derby hats," she explains in an email, proceeding to detail her process for hat creation in full.

"My hats are couture, each one individually handcrafted and trimmed to suit the wearer's sense of style and sized to fit. For the foundation for each hat I use only fine fabrics such as dupioni silk, silk organza, and shantung, and I trim them with various elements such as silk organza 'feathers,' fabric leaves, rose curls, Marguerites, peonies, anemonies, sashes, and bows — once again, all individually handcrafted. Prices for my Derby hats range anywhere from $498 for the simplest fascinators to well over $1,500 for the more detailed wide brim styles. The most expensive hat I ever created sold for over $3,000 and featured a polka dot pattern that I created using hundreds of tiny Swarovsky crystals hand stitched, one by one, into fine dupioni silk."

When it comes down to it, though, the sign of a good Derby hat is less about the price and more about the statement it makes by the woman who's wearing it.

"I believe that what makes any Derby hat fabulous is uniqueness," Steinmann adds. "Some hats just have the 'it' factor. Sometimes it's about the size — a grand, sweeping brim, curved just so, can definitely make a stunning impression. But sometimes it can be the smallest embellishment, or the way the trims are arranged that can make a hat memorable. I am not a believer in the 'everything-but-the-kitchen-sink' style of trimming where trims are piled on a hat! I prefer a more thoughtful, artistic selection and shaping of the trims that results in a sophisticated elegance and balance."

And while each hat is unique and comes at a cost, when Derby time rolls around, the concept of a budget may or may not go out the window. It's just a hat, sure: But in a sense, the hat is what's at the center of the entire Derby universe.

"The best Derby hats make a statement," Steinmann says. "They have a unique personality that is vibrant and very much all their own. These are the hats that literally seem to say, 'Here I am! I am the centerpiece and there is no one else quite like me.' And you KNOW them when you see them because they take your breath away."

Take your breath away they certainly do.

More like this
How To Get Your Hands On The Pat McGrath X Supreme Nail Kit
By Justine Knight
Prefer Alcohol-Free Perfumes? Water-Based Fragrances Are On The Rise
By Audrey Noble
15 Chrome Nail Polish Colors For An Easy, Mirror-Like Manicure
By Audrey Noble
Genius T.J.Maxx Shopping Hacks For Sales On (Almost) Everything
By Kelsey Stiegman
Get Even More From Bustle — Sign Up For The Newsletter