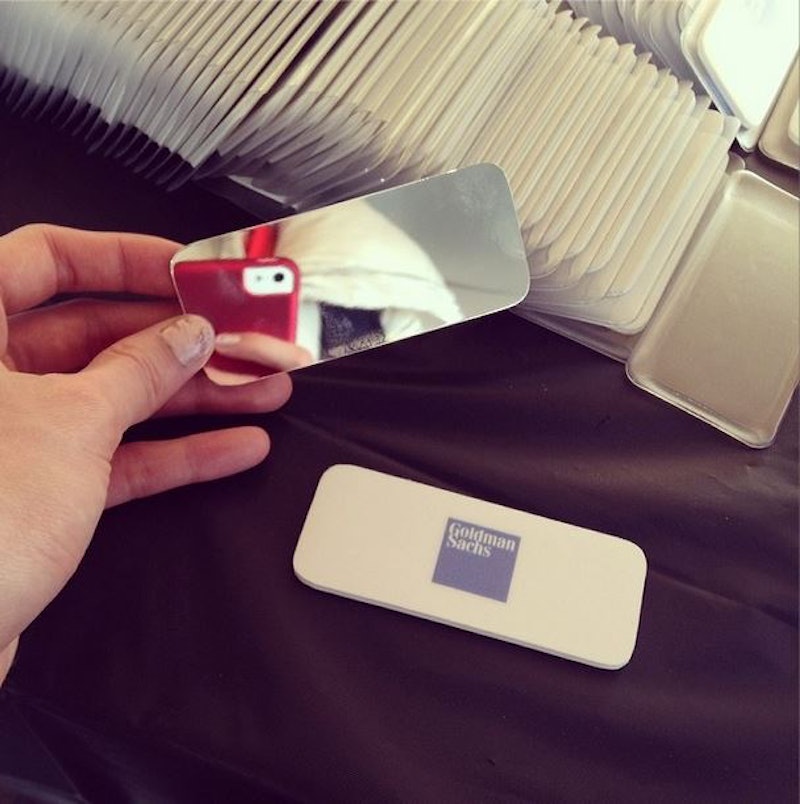 Last week, Harvard University held its Women Engineers Code (or WECode) conference geared towards women interested in computer science. Awesome, right? Hoorah for women in coding and other male-dominated industries! But unfortunately, one of the biggest sponsors of the event did something definitely not awesome: Goldman Sachs decided it would be a great idea to bring along a whole bunch of cosmetic mirrors emblazoned with the their logo as party favors. Y’know, because women like…makeup…or something…right?

Man, we’re just striking out left and right today, aren’t we? One of the attendees of the event Instagrammed a photo of the offending item along with the message, “Not sure if this is #sexyfeminism or gender stereotyping.” I’m going to go with gender stereotyping on this one, but maybe that’s just me. And word on the street is it that Goldman Sachs brought nail files, too. I just want to know what the train of thought was that inspired this horrible, stereotype-enforcing idea: “Let’s see… Party favors for women who code… What do women like? They couldn’t possibly need any freebies that are, y’know, useful for their line of work, like USB sticks or other fun gadgets… I know! Makeup! Women love makeup! Let’s bring them makeup mirrors! And those things they use to make their nails all pointy-like! We are geniuses!”

Naturally, Goldman Sachs backpedaled pretty quickly, releasing a statement that reads, “We are strong supporters of efforts to recruit and retain women in technology. We apologize if the gifts gave anyone offense.” And to be fair, Google didn’t really do much better; they brought along socks knitted with their logo, although they did go so far as to replace one of the “O’s” with the symbol for “woman.” But hey, at least socks keep your feet warm while you’re busy coding on a cold winter’s night, right?

Although come to think of it, maybe those mirrors and nail files might be more useful than I’m giving them credit for. I’m sure someone will be able to MacGyver something incredibly cool out of them.

More like this
The 7 Best White Face Paints For Halloween In 2022
By Maria Cassano
How To Politely Reject Someone Who Keeps Asking You Out
By Laken Howard and Lexi Inks
Bustle Daily Newsletter: September 29, 2022
By Hayley Schueneman
42 Things That Make Everyone Look Even Better & Cost Less Than $30 On Amazon
By Maria Cassano
Get Even More From Bustle — Sign Up For The Newsletter