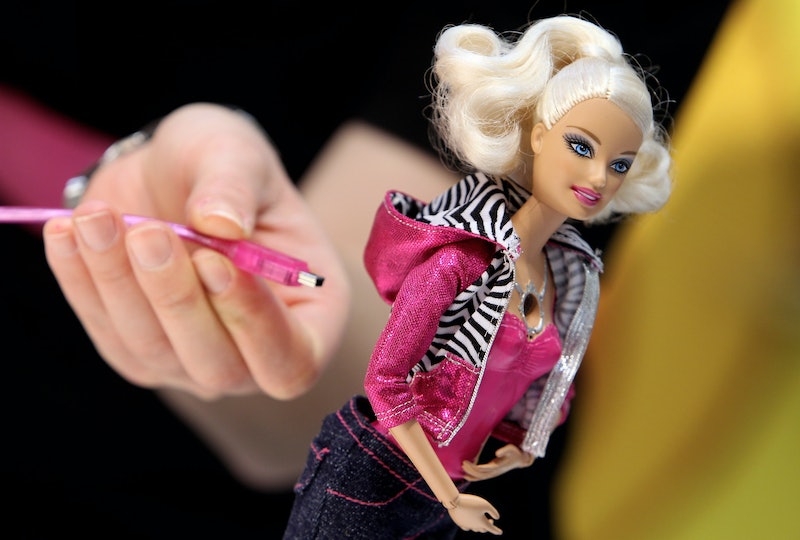 If you were, for some reason, planning on looking at Sports Illustrated's upcoming swimsuit issue, you might be in for a big surprise; it seems Barbie will be making an appearance as one of the "models." And here I thought Barbie was a doctor. Or an Olympic athlete or a business woman or...come to think of it, my Barbies had an awful lot of careers. But now I guess we can add Sports Illustrated model to the list. It's not an advertisement; Barbie will actually appear as a model alongside the flesh and blood models for the 50th Anniversary edition of the infamous swimsuit issue. Because hey, why not?

Well, actually I can think of a lot of reasons why not. It's true the whole issue will feature swimsuit "legends" in honor of the anniversary. Barbie is a certainly a legend, and her first outfit when she launched in 1959 was a black and white one piece. But can we maybe bring up the part where Barbie isn't real. She's a toy. A doll. She's made of plastic. Plus, she's less than a foot tall. How can she be a model? She's not real.

Even more important, though, Barbie isn't just not real; her dimensions aren't even possible . If Barbie were a real person, she would actually be incapable of standing up because of her upper body is too busty and her feet are too small. Mattel, the maker of Barbie, is certainly aware of the scrutiny regarding Barbie's unrealistic proportions. Regarding the upcoming swimsuit issue, a spokesperson for the company said, "As a legend herself, and under criticism about her body and how she looks, posing in 'Sports Illustrated Swimsuit' gives Barbie and her fellow legends an opportunity to own who they are, celebrate what they have done, and be unapologetic."

There are lots of people who should be unapologetic about the way they look, namely every real life woman on the planet because, well, that's how they look. But Barbie looks the way she does because toy makers keep her dimensions that way in spite of being asked for years to change. And now they're parading her around the page of Sports Illustrated like she's an ideal. I never thought I'd be saying this, but couldn't that space have been used for another thin, conventionally beautiful, human model who promotes unrealistic (though still remotely possible) body standards?

The swimsuit issue is coming out on February 18th, and will feature "swimsuit legends" such as Kate Upton, Kathy Ireland, and Heidi Klum. Barbie's spread is reported to feature 22 dolls in various poses. And Mattel has come out with a special collector's edition swimsuit, presumably an homage to Barbie's first outfit 55 years ago. It's nice to know we've all come a long way since then.

More like this
Bustle Newsletter: September 27, 2022
By Stephanie Talmadge
Constance Wu On Self-Doubt, Family Drama, & Her Sister's Unwavering Support
By Constance Wu
Bennifer, Kravis, & 14 Other Fun Celeb Couples Halloween Costume Ideas
By Emma Carey and Brittany Leitner
Gigi Hadid Has Been Wearing UGG Boots Nonstop At Paris Fashion Week
By Dominique Norman
Get Even More From Bustle — Sign Up For The Newsletter