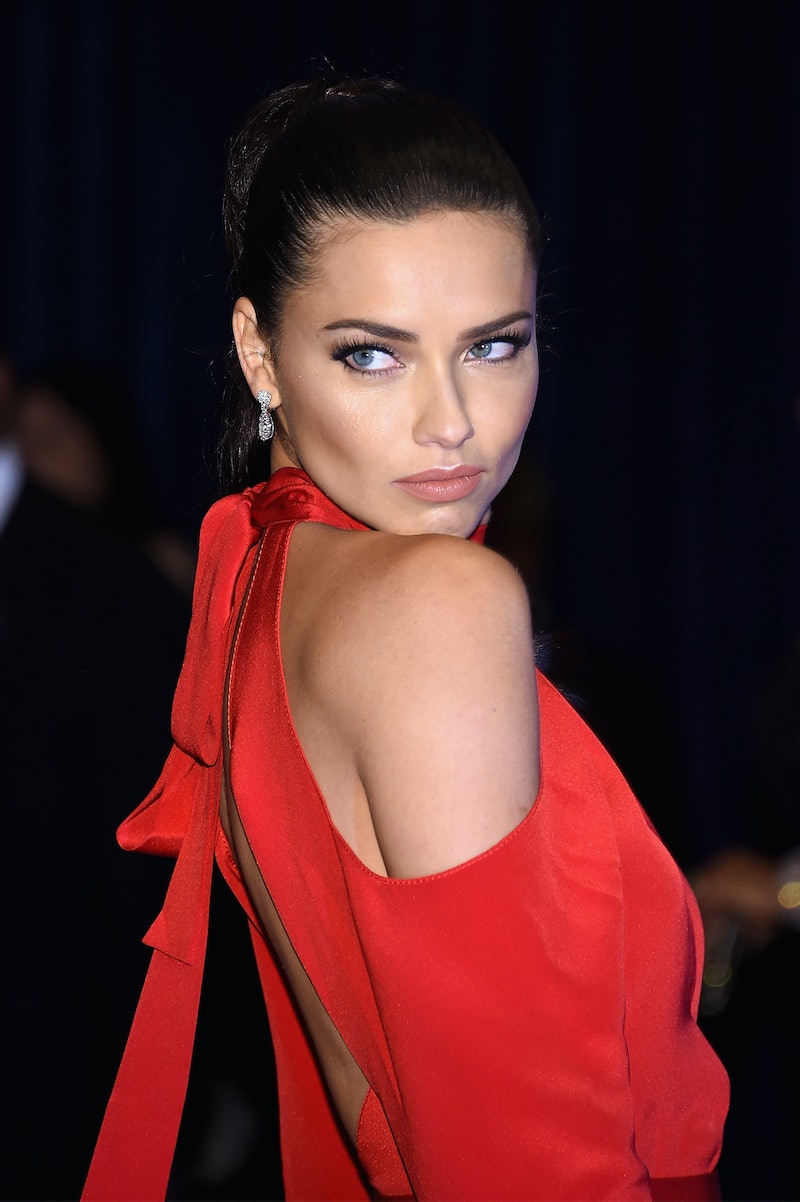 Growing up, becoming a model was never something that was on my radar. I spent years imagining my adult life as a doctor, before realizing that blood made me vomit on sight. I wanted to be a singer, but quickly learned that in order to do so, you had to be willing to do more than simply sing Mariah Carey songs in your shower. The modeling this was always a mystery to me, which is precisely why at the wizened old age of 30, I wanted to conduct a little experiment to see what attempting to recreate models' facial expressions on the runway actually entails. Would my regular visage have what it takes to serve serious face?

My hypothesis was that it would likely be much harder than it seemed. In fact, I really respect what models do on a daily basis, because frankly, that shit is not easy. Not only do you have to have a very specific-and-yet-simultaneously-undefined Look with a capital L, but you've also got to figure out how to stand in awkward poses for hours and hours, wear things you actually hate, and contort your face in the absolute perfect way for the shot. All of this in addition to the fact that you're working in a fiercely competitive industry that routinely seems to demand you adhere to strict standards of beauty.

And luckily, as much as I don't want to be a model, no one wants me to be a model, either. I'm an average-looking 30-year-old woman who manages to capture one good photo for every 500 photos where I'm eating, gawking, or screaming at someone out of frame. This time, though, I wanted to photograph myself with some serious intention behind my facial expressions, just as I've seen top models do while they're working. The images below are a result of that experiment, and needless to say, things got a little weird.

Gisele has a classic, all-American look (despite the fact that she's not an American), perfect balayage hair, and an incredible jawline. She's gorgeous in that sun-kissed, beachy kind of way, and I will forever be enamored with her ability to smize while making a graceful turn on the catwalk. Noticing that many of her runway images are taken from the side, here's my attempt.

This was the shot I thought would be the easiest, but it turned out to be the hardest. For starters, I simply can't compete with a Gisele-jaw-situation. Also, I never properly learned how to smize, so instead of looking playful and coy, I just look like I'm judging you. Don't worry, I'm actually just judging myself.

Cara Delevingne always looks like a badass in photos, and I think it's because she's got the cooler-than-thou smoldering squint down to a science. "I can squint at people," I told myself. "I can look cool like Cara."

Not quite, but a commendable effort. I learned that what really gave me Cara-vibes were my brows, which took me approximately three months to fill in for this photo. Still, some weren't happy with the look. As one commenter suggested on my social media, I "looked like I was constipated." Rude as hell, but ultimately, fair.

Adriana Lima looks so incredibly over it in this photo, but I guess that's what #fashion is all about: Being at the center of it while giving the impression that you don't care at all. I commend you for your absolutely intentional apathy, Adriana. Here's my take on your sullen look.

I ultimately ended up liking this one the most, and not just because I could wear a dramatic black scarf. I see this on one of my future book jackets, if and when I write a memoir about living life as a dyspeptic, aging Millennial who literally cannot.

Kendall Jenner is a really versatile model, because she can rapidly transform her face from the natural girl next door to a couture goth at a moment's notice. For this experiment, I chose Morose Kendall in Balmain, and the outcome was not what I expected.

Alright: You're speechless, I'm speechless, my roommate's dog barked at me while I took this photo, and this is terrifying, so I'll just leave you with seven words: Before you die, you see The Ring.

For whatever reason, Suki Waterhouse's Looks seem to veer towards melancholy. That was fine by me, because if there's one thing I can do, it's pensive and melancholy. I am a writer, after all.

It may have been sunny outside, but it was raining tears of emotional contemplation in my high-fashion heart. For me, this was probably the most accurate recreation of the bunch, overcoat and all. I'm not sure if the fact that it's easy for me to look melancholy is a good or bad thing, but I do see a future book jacket cover in this photo's future.

I'm not sure what Karlie Kloss is serving us here, but she makes this face quite a bit. Is it a fashionable fish gape? Is it a pout? Is it the facial manifestation of the moment she realized that everyone should learn to code? I'm not sure, and I wasn't sure about recreating it, either.

This photo is such a perfect visualization of what this experiment is all about, and not just because it's an awkward image of a regular lady trying to look like a 23-year-old Victoria's Secret darling. In my image, you can basically see why most of us aren't professional models: Our faces cannot be easily contained into the perfect pout at a moment's notice. Instead, we struggle to arrange our mimetic muscles in configurations that we think will make us look chic and unbothered, but instead create asymmetrical lines and uncertain mouth-holes, no matter how hard we try.

Maybe it takes practice, or maybe it just takes being born with a certain something that only models have. Maybe they talk about it frequently, and have signed blood oaths that none of us are allowed to know about.

This isn't to say that models are more beautiful than the rest of us. Despite the awkwardness, taking these photos affirmed to me that I'm pretty good-looking, myself. It's just that in addition to being beautiful like us, models know how to manipulate their beauty into something that looks appealing to the masses on camera, 100 percent of the time. If that's not skill, I don't know what is.

All I do know for sure is that I'll leave the modeling to the models, and move forward in this world performing what might be my true calling: Scaring infants and animals with my Kendall Jenner face. It's an occupation that I never imagined as a child, but somehow, I think it could make all my dreams come true.