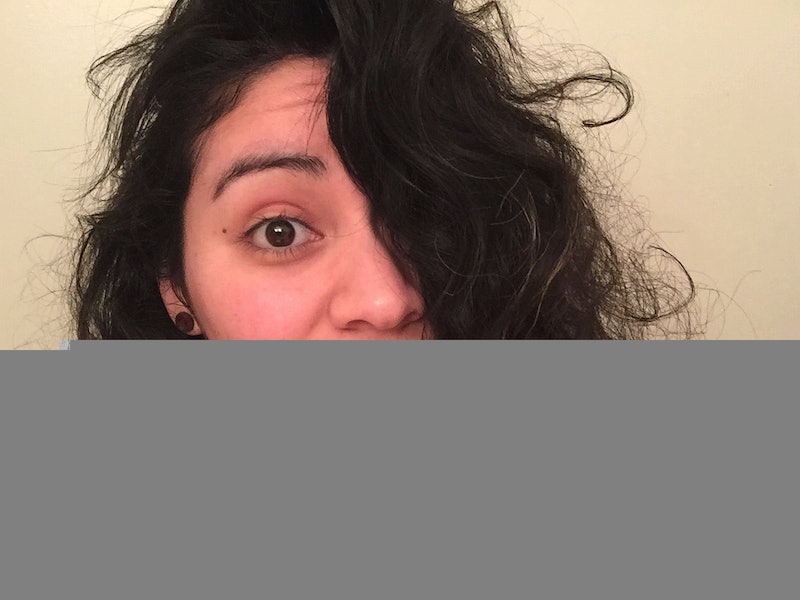 Springtime means that warm weather and brighter colors are officially in, and that includes your hair! But for someone with black hair like mine, this usually means bleaching to achieve that desired honey brown or ombre effect. I have never shied away from doing this, as my hair stylist does a fantastic job of minimizing the damage bleach inevitably causes to my black curls. However, when I heard that chamomile can lighten hair easily and without the use of harsh chemicals, I definitely had to give it a shot.

I am always up for a good DIY beauty experiment, and seeing as I was already getting bored with my hairstyle (that I recently changed to in January), I felt like this would be a win/win beauty adventure. I had also previously seen my friends lighten their hair using lemon juice, so I wasn’t new to the DIY hair lightening phenomenon. However, even though their hair lightening had been successful, none of them had naturally jet-black hair like mine.

To break things down easily, chamomile contains three flavonoids (what gives plants their pigmentation) called apigen, quercetin, and azulene. Apigen is a natural chemical that has been found to help reduce the lifespan of cancerous cells, as well as brighten hair when combined with azulene (a dark blue chamomile extract). On the other hand, quercetin is what lightens the hair. CenterChem.com explains that "quercetin is an inhibitor of tyrosinase" an enzyme that limits the production of melanin — the same chemical that darkens skin and hair. When all three of these components come together and are applied to hair repeatedly, they will gradually lighten it one application at a time.

I knew it was going to take a lot of patience, so here's what happened over the course of four weeks.

I have to admit that my skepticism for how successful chamomile would be in lightening my hair was fairly high from the start. When I lightened my hair at the salon, it usually took a good amount of time to get it to the perfect blonde color even when using quality developers and bleach. Granted, I wasn’t expecting my hair to become platinum blonde overnight, but I also wasn’t sure if it would even work in the first place.

On the other hand, I was 100 percent sure that this would test out how effective the chamomile method actually is for people with black hair, as mine has been untouched by dyes or bleach since 2014. Besides the tiny amount of blonde at the ends of a small section of hair, the rest has yet to experience any kind of manipulation to its color. It has been hard to keep this up, since I am a color fanatic, but my healthy curls have been worth it.

According to all the websites and tutorials I read on how to successfully lighten hair with chamomile, I pretty much only needed a lot of tea bags, water, and patience in order to rinse my hair in chamomile. I could also create a yogurt and chamomile hair mask, but I wasn’t sure if I really wanted to put yogurt in my hair.

I went into this experiment hopeful, but duly realistic that my hair would look exactly the same after finishing week one. All of the recipes varied on the amount of water and tea bags used, but emphasized the importance of strong, black tea. To achieve this, I decided that two cups of boiling water and five tea bags would be enough to reach that intensity. I let them seep in a covered bowl until the water cooled before removing the tea bags.

While this was happening, I made sure to wash and condition my hair as I usually would. Although some articles mention not conditioning your hair, I didn’t want to skip this step because my curly hair needs to be conditioned to even stay somewhat tamed. Once I did this, I put it up in my Turbie and prepped my room to become a hair seeping station.

I laid out a towel on my floor and placed the bowl on top. At this point, I had the “brilliant” idea of adding cinnamon to the brewed tea. I had read somewhere that cinnamon can help lighten hair and figured this could aid in my lightening. Little did I know (or logically thought of beforehand) that the ground cinnamon I stirred in my tea would then have to sit in my hair and, naturally, flake off like red dandruff. Gross!

Unfortunately I added it and then simply dipped my hair in the bowl while House of Cards played in the background. I stayed like this for about 10 minutes, using my hands to scoop up some of the tea and cover the roots of my hair. Afterwards, I wrung out the excess liquid, applied some argon oil, and went to bed.

I did make sure to keep some of the tea in a recycled spray bottle (filtering out the cinnamon) and applied this every night and a little in the morning, since I only wash my hair every three to four days.

By the end of week one, my hair looked exactly the same as when I first started the experiment. I had already expected this, so I decided to continue doing what I had been doing in the hopes that my diligence in keeping my hair rinsed with chamomile tea would eventually have some wonderful effects by the end of the experiment. I did make sure not to use cinnamon again when I re-rinsed my hair by my three to four day wash. On the other hand, I increased the amount of chamomile tea bags to six and reduced the hot water enough so that more bags seeped in less to create a darker tea. I also tried to sit outside in the sun a little bit, but the weather never cooperated with me.

As I passed the third week mark, I was still not seeing any results in my hair. Even a woman I work with (who knew of my experiment) commented that my hair only smelled lovely, but looked exactly the same. I was even noticing that my ends were drying out a little and not curling as they usually did. I wasn’t sure if this was because I just needed a haircut or a result of my constant applying of chamomile tea.

Whatever the cause, I still did not want to give up and decided that I would have to try the yogurt + chamomile hair mask I had been avoiding. So I prepped my usual mixture and grabbed my Greek yogurt out of the fridge. Then I mixed about two tablespoons of the yogurt with a half cup of chamomile tea, which resulted in an almost-runny milky mixture.

Looking at the concoction in the bowl made me question whether it would be effective, so I added some honey since it is also known to lighten hair and could help in thickening the hair mask. After mixing everything together, I washed my hair and (in the shower) applied the hair mask as best I could. Once it was saturated, I double wrapped it in two plastic bags that I substituted for shower caps and let it sit in my hair for two hours.

I spent the majority of this time in the bathroom because the hair mask ended up dripping, but once two hours went by, I rinsed my hair and sprayed it with more chamomile before letting it air dry outside.

I attempted the yogurt + honey + chamomile hair mask a few more times but was saddened to see that my hair had still not lightened by the end of week three. I reverted back to just rinsing my hair in chamomile tea and re-spraying daily, while also trying to get as much sun exposure as possible. I knew from watching my friends that sun helps lighten hair, especially when aided by things like lemon or chamomile tea. Alas, it proved wary with UV indexes at zero for most of the time because I live in New England and we haven't gotten the memo that its spring.

Despite my best efforts to lighten my hair with chamomile, I had no such luck. For starters, my hair is basically the color of a black hole and seems to absorb everything with no effects. All of the before-and-after photos of people who have successfully lightened their hair had a lighter color than mine to begin with like brown. It could just be that my hair color simply requires a much stronger process to lighten, which is totally fine but means causing more damage to the hair strand. It could also be the health of my hair (good or bad, I’m not entirely sure) is different from those who also did this experiment.

After the four weeks went by, I finally headed to the salon for a haircut and asked Sade Doucette, my hairstylist at La Novita, what her thoughts were on the entire experiment. Firstly, she chuckled and proclaimed that my natural hair color matched her dyed black hair. Then she explained that "the darker the hair, the more melanin it contains," which is why "those with lighter hair are able to lighten it with simple additives like chamomile, but darker hair requires a stronger process."

Afterwards, she added: "People use lemon juice or products like Spray-In Hair Lightener, but this can actually cause more damage in the long-run due to its high acidity." According to Doucette, if I had used lemon juice like some of the recipes said, the chance of my hair lightening would have increased. However, I would have also dried out my hair and caused more breakage to occur. Not only that, but if I chose to bleach it in the future my hair strands would expand quickly once the bleach was applied and more easily break or fry, which is never a good thing.

Knowing this after experimenting for four weeks, I am so glad that I opted out from using lemon juice. I had purposely avoided it because it had made my hair fall out in the past, but I am definitely going to bleach my hair soon and would have been devastated to have my hair break or damaged further.

Honestly, hair is fickle. And mine really likes to test my nerves despite the love I give it. I embarked on this journey to see if I could find a healthier way to lighten black hair without using bleach; I wanted to preserve the hair strand as much as I could and with as little damage as possible. Unfortunately, this DIY didn’t work out for me because my hair is just too dark. I sincerely suggest you try this — without the lemon juice — if you have lighter hair, because the chance of it working is much higher. But if you have my hair color, you're better off just getting it done professionally.

More like this
The Chicest ’90s Updo Hairstyles To Try
By Paris Giles
Your No-B.S. Guide To Female Pattern Hair Loss Treatments
By Parizaad Khan Sethi
Lily Collins Got Shaggy Curtain Bangs For Emily In Paris Season 3
By Audrey Noble
12 Bellissima Beauty Moments From Milan Fashion Week S/S 2023
By Olivia Rose Ferreiro
Get Even More From Bustle — Sign Up For The Newsletter